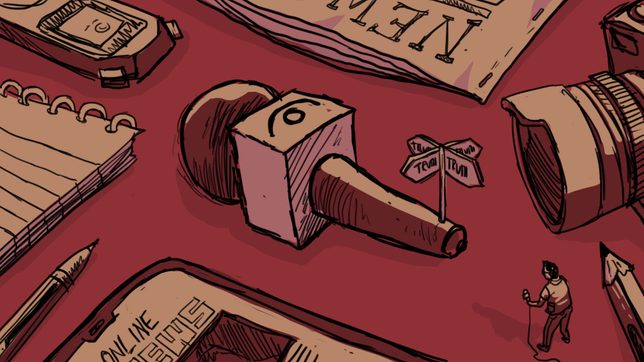 Facebook Twitter Copy URL
Copied
'Indeed, it is difficult to be a journalist at present, but that, in and of itself, is a reason to pursue the discipline of journalism even more'

At a press conference on June 2, 2016, then-newly elected President Rodrigo Duterte said that he would “personally attack” journalists who are critical of him. Now, he lives up to his word. July 18, 2020 is perhaps the culmination of that promise, as the dreaded Anti-Terrorism Bill pushes through the wall of mounting concerns and oppositions into effectivity.

This may no longer be a surprise to you that during the span of President Duterte’s contentious leadership, there have been innumerable attacks against the media, from basic intimidation to being labeled as members of the New People’s Army (NPA). It is evident that the President’s hostility towards the press poses a threat to journalism in the country as we know it.

The President has also taken advantage of the coronavirus pandemic to enforce stricter measures on free speech and press freedom. In a report from the Freedom for Media, Freedom for All (FMFA) Network published on May 3, the “Bayanihan to Heal as One” Act, which passed into law on March 23, has granted the President emergency powers that include penalizing “fake news.”

At first glance, this may seem like a noble endeavor to help him battle the threats of the pandemic. However, upon further inspection, this provision can be exploitative, as it paves the way for law enforcers to report any social media post as “fake news,” which, the May 3 report claims, “adds to the danger of random charges based only on unfounded complaints.” Officials may happily resort to such exploitation of the provision when they feel that they are subject to criticism. Upon the law’s passage, 60 individuals have already been charged based on this provision – this is separate from the 61 other reported incidents of threats and attacks versus the press from January 2019 to April 2020).

The report has made it clear: while the country is fighting the virus, the President is fighting his own private war against his critics.

The President’s hostility does not end here, however, as seen in his unwavering determination to shut down ABS-CBN (a network known to report stories critical of the administration) under the guise of “dismantling the oligarchs.” In his various separate speeches concerning the network, he has shown the public that it is alright not just to publicly berate the network, but to cease its operations and make tens of thousands of Filipinos lose their jobs. This, all in the name of a personal vendetta and other unfounded accusations – an act which screams, “Do not displease me, or you will be next.”

<h1>The threat of the Anti-Terrorism Law</h1>

As disconcerting as it may be, all the aforementioned threats and attacks against the press may be dwarfed by the Anti-Terrorism Law. Passed on July 3, 2020, the law, broad and prone to exploitation, boasts an even greater restriction to free speech. Now, in the eyes of the law, “activists” and “terrorists” may be interchangeable, and criticism may be labeled as conspiracy. Faced with the threats of chargeless, warrantless arrest and jail time of up to 24 days, this perhaps marks the most challenging time to be a Filipino journalist in years. Seeing how the “Bayanihan to Heal as One” Act turned out, we can be sure that this law will most certainly be weaponized by the government against its critics.

In just 4 years, the administration has managed to put its hands around the neck of press freedom, and is slowly but surely choking the life out of it.

Upon realizing the dreary events of the past few years, one might think that it is impossible to fight against this power looming over the country. However, it is during times like these, when power suppresses truth, that the people must speak louder; it is during times like these, when the President can pass any law he wants, that we shall remain vigilant, watchful of the rights such laws might ignore. Indeed, it is difficult to be a journalist at present, but that, in and of itself, is a reason to pursue the discipline of journalism even more, for true journalists hear within the walls of their hearts the cry of a nation hungry for truth, and find it within themselves to act upon it. We, the Filipino people, can save journalism and press freedom by becoming journalists ourselves.

But being a journalist requires more than just being able to voice out concerns. Not everyone who criticizes could be branded a member of the press. Then, how can one be a journalist? Three things:

One might say that this is but a microcosm of an art that takes years to perfect, and it is. Journalism requires persistence, discipline, and intelligence, committed to providing the public with the information they deserve. But in order to preserve this cause, we must at least employ the 3 things I discussed and see to it that we do not yield to unreasonable, unfounded, and restrictive measures.

The independent media is a reflection of our democracy, and the demise of one will be the demise of the other. Therefore, as a Broadcast Journalism student, I urge you: keep your eyes open and your pens at hand. It is within our capacity as free Filipino citizens to express our dissatisfaction with the government; it is our birthright to be able to speak up against what we believe to be incorrect, and we shall do it with the discipline and intelligence worthy of the title “journalist.” Together, we shall let our voices be heard until we can look back to this moment as just a dark chapter in our past. – Rappler.com

Zeus Legaspi is a Broadcast Journalism student from De La Salle University-Dasmariñas who is keen on preserving press freedom in the Philippines.