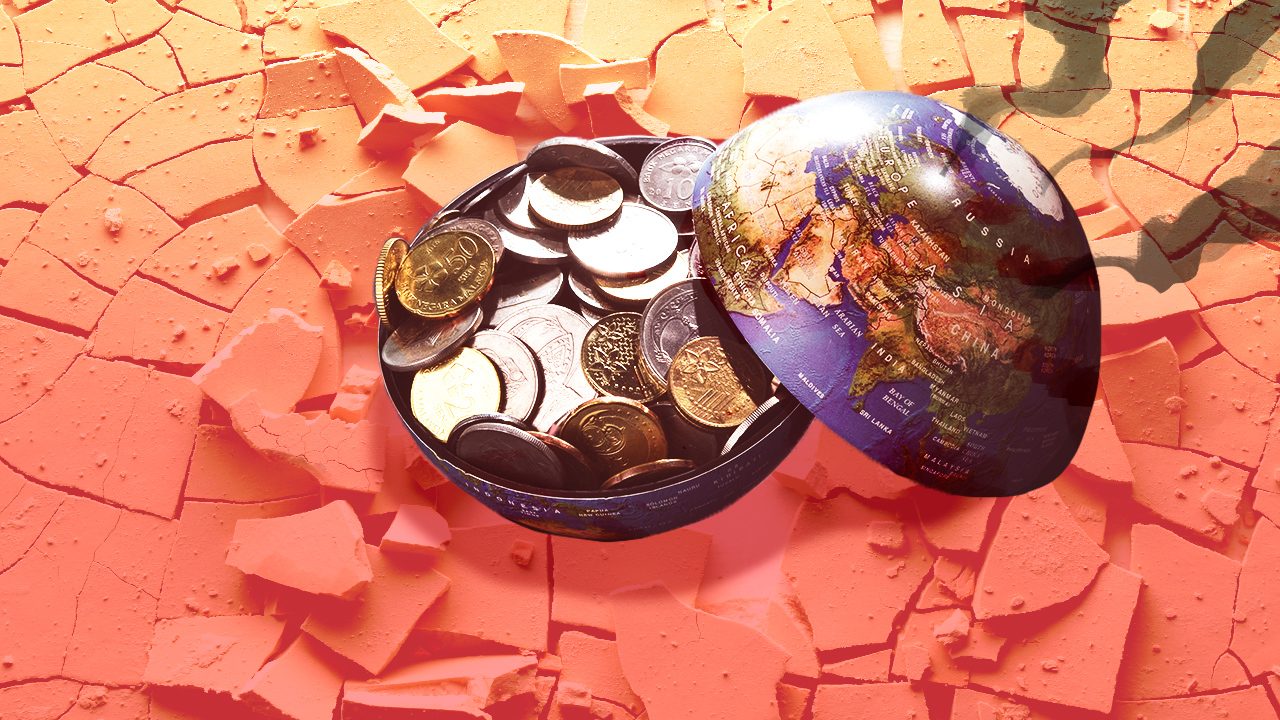 Facebook Twitter Copy URL
Copied
'There is a mounting cry for climate justice from the South. There must be reparations from the North.'

The Philippines’ contribution to greenhouse gas (GHG) emissions does not even reach one half of 1% of the world’s total, but Filipinos are still paying a hefty price, with the massive loss of lives and jobs, and the physical destruction of shelters, farms, and government infrastructure. This, while those who pollute the planet most – the rich, capitalist countries and their transnational corporations (TNCs) – wallow in wealth in the safety of their havens.

The grim images in every typhoon’s aftermath show not only devastation, but their enormous costs. But do we have any idea how much these are in pesos or dollars? And who, by the way, are paying these bills?

Storms have a price tag

Preliminary estimates place damages from Typhoon Ulysses (Vamco) at at least P10 billion, which is believed to be more far-reaching than Tropical Storm Ondoy (Ketsana). The former placed more areas underwater, including Cagayan, when big dams released water exceeding their holding capacity. Ondoy left 747 dead in 2009, and damage to agriculture was estimated to have reached P3.1 billion.

Ulysses came just days after two other typhoons, Rolly (Goni) and Quinta (Molave), hit the southern part of Luzon. Estimated cost of damage from Rolly, the strongest typhoon to date for 2020, was P11 billion.

Earlier, the government conducted an official accounting of damages from natural disasters that had hit the country from 2006-2015. They reached a total of P374 billion, according to the 2016 Compendium of Philippine Environment Statistics (CPES). A separate study from the Philippine Institute for Development Studies (PIDS) indicated that damages from 2013’s Yolanda (Haiyan) alone reached P571.1 billion.

The PIDS report said the Philippines, based on catastrophe modeling, faces an annual average of P133.2 billion in losses from tropical cyclones and P43.5 billion from earthquakes. Now, how do we fund relief for regular disasters like these?

The National Disaster Risk Reduction and Management Fund (NDRRMF), commonly known as the calamity fund, and the Local Disaster Risk Reduction and Management Fund (LDRRMF) were created for this purpose. Over the last 3 years, however, they were cut down when they should have been increased instead amid the intensifying climate crisis. The NDRRM fund was raised to P38.9 billion in 2016 from P6 billion in 2011, but was then cut down to P15.755 billion in 2017. A P30-billion calamity fund was proposed for 2019, but it was cut down again by Congress to P19.6 billion. Then the fund for 2020 was reduced to P16 billion. The allotment for the proposed 2021 budget is P20 billion, only P1 billion higher than the newly-concocted P19-billion fund for ending the local communist insurgency.

Evidently, this level of funding hardly meets even the most immediate post-disaster needs of Filipinos, notwithstanding the bottlenecks and issues of corruption in the response process. Thus, most of the post-recovery efforts come from the people themselves, and in the case of businesses – 99% of which are micro in scale – the resiliency of enterprising Pinoys.

But for ordinary workers who earn less than P400 per day, this glorified concept of Filipino resiliency is nothing but leveled-up sacrifice in the face of ever-increasing neglect by and hostility from the ruling elite. This resiliency, I hope, advances into a level of resistance; otherwise, the working class will be locked inside a cycle of permanent sacrifice.

The Filipino people have been making a lot of sacrifices due to the climate crisis. And government funds regularly allocated for disaster response is money taken away from other much-needed social services. We should assert that funding for climate change damages must come from external sources instead – particularly from Annex 1 countries. Officially, the country has committed to significant emission reductions targets of up to 70% in climate negotiations. But those who are assigned to foot the bill, the highly industrialized countries, are failing in their financial obligations.

As the current climate change narrative departs from natural to man-made causes, so must the consciousness of the working class change. For it is no longer about whether the natural or the man-made phenomenon has greater value in the climate change debate. It is about who among the most responsible have the most to pay in the climate bill.

Climate scientists have all pointed to industrial activities over the last 50 years as the cause of the rapid increase in GHG emissions, and thus of the rise in global temperatures. Capitalist countries, which own these great carbon emitting industries, therefore owe developing countries like the Philippines billions of dollars in climate debt.

There is a mounting cry for climate justice from the South. There must be reparations from the North.

But victims have climate obligations, too, in ensuring a reduction in carbon emissions. Workers do understand this duty, since more jobs and sources of livelihood will be destroyed if the planet keeps on warming. Moreover, we truly recognize that the only way to stop the planet from heating up further is to shift current production and consumption processes to low-carbon economic activities.

The Philippine labor agenda on recovery

COVID-19 merely compounded our climate problems. Decoupling the climate crisis from the health crisis, which the Duterte government is doing in its emergency response and recovery program, ignores the interconnectedness of these crises and rejects the viability of nature- and employment-based strategies for recovery in favor of market-based, business-as-usual solutions.

It is for this reason that worker organizations in the Philippines affiliated with the broad labor coalition Nagkaisa (United) are pushing for a labor agenda on recovery which includes income and employment guarantees to address the job crisis. Our demand for employment contains a proposal for the creation of climate jobs in renewable energy, the housing and building sector, transportation, and nature conservation.

We are advancing this climate jobs agenda based on the principle that recovery should not just heal, but also make people more healthy and secure; that it does not simply restore lost jobs and free markets, but creates green, decent jobs and a sustainable future. We also campaign for a tax on wealth to finance this recovery and development agenda.

Needless to say, recovery from COVID-19 and the transition to a safer and better world can be made faster and more viable when binding climate justice and reparation obligations together, replacing the menial act of donating and loaning from rich, capitalist nations. – Rappler.com

Wilson Fortaleza is a member of the Executive Committee of the Partido Manggagawa and one of the convenors of Nagkaisa Labor Coalition. He is also a fellow at the Center for Power Issues and Initiatives, where they discuss policy issues on renewable energy and energy democracy.