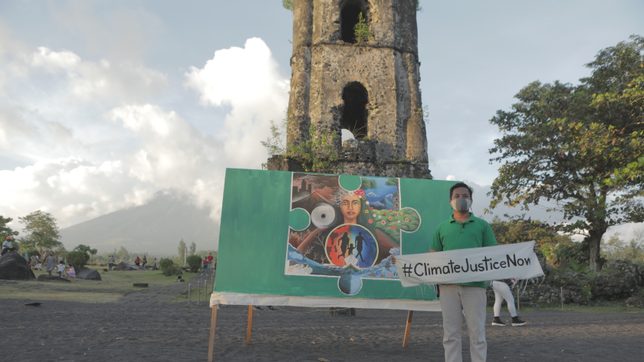 Facebook Twitter Copy URL
Copied
'We have heard enough of your talk. Let your actions speak for themselves.'

It’s been a year since my home, Albay Province, was ravaged by three consecutive strong typhoons. One was Super Typhoon Goni, locally known as Super Typhoon Rolly — the typhoon that shook the Bicol region just as we needed the world to be a little quieter, as we dealt with the impacts of COVID-19.

Super Typhoon Rolly is still fresh in my mind. I still remember the cries, the fright, the restlessness of that week. Our health was being challenged; we were tired both mentally and physically. But the less fortunate had it worse — those whose houses were not made of stone and needed to evacuate to some place they were unaccustomed to, for the sake of survival.

Some of these families are still living in evacuation centers today, because they don’t have enough money to fix their homes.

Due to the typhoons, the food providers – the fisheries and agriculture sector – suffered. Rolly had a devastating impact on their livelihood. The aftermath of this typhoon was also an additional burden on students still coping with the new educational setup due to the pandemic.

Some areas here in Albay, including my community, are still struggling. We waited for months for electricity to be restored. And while spending P10 to P15 was a burden to us, we needed to do since we were left without any other options to connect with our loved ones except online.

It has also been a year since I, together with the Bicol University Science Alliance Club, released a position paper demanding the government to declare a National Climate Emergency. Our call was driven by the need to protect the youth and other Filipino communities from the worsening impacts of the climate crisis.

But as we mark one year since the nightmare Super Typhoon Rolly wrought, we are becoming more frustrated by the inaction and lack of urgency.

Since we called for the declaration of a climate emergency, the House of Representatives answered us by adopting House Resolution 1377. But like other climate policies this country has, the Resolution is insufficient. It is a non-binding declaration that appears to me to be nothing but political lip service. The declaration encourages local governments and agencies to adopt policies to mitigate the effects of climate change, but it does not impose any legal obligations on them.

We have also seen how people with power and status use the resilience of the Albayanos to ignore our call and shirk their responsibility. We’ve seen how the word resiliency hides reality, becoming a scapegoat for those supposed to be accountable. It has become over-exploited and romanticized by many.

To this day, as you’re reading this, there are still families forced to leave their homes because they are affected by the impacts of climate change. Worse, some of them have become climate refugees. For instance, one family in Guinobatan is still living in an evacuation center because their home was buried underground due to the lahar caused by these typhoons. World leaders need to develop and strengthen policies that would make the planet better for everyone. World leaders must establish a strong relationship between experts and the community. World leaders have the power to make or break everything, based on their decisions.

World leaders must hold the planet’s biggest polluters accountable. Corporations must admit that they have made a significant contribution to anthropogenic climate change and must stop their business-as-usual, greenwashing and community-blaming practices — as if people are not doing enough to protect the environment. These corporations need to shift to more sustainable and environmentally friendly practices.

This is my plea: please make intelligent decisions in every situation you may find yourself in. Protect our rights, our future, and our home.

To the Filipino people, to those who stand with our environment, specifically young advocates, my message is that you should not feel intimidated, but rather empowered, for we are the future, and it’s our right to demand and protect ourselves. We should proactively engage in awareness, mitigation, and adaptation activities in our respective communities. We should be vigilant about the decisions being made by both the local, national, and world leaders and corporations, and continuously demand for what’s just and right. – Rappler.com

Bill Angelo B. Bontigao is a 21-year-old climate justice activist from Albay. He is also an environmental protection-conservation advocate and an active member of various local and national youth-led and youth serving environmental organizations.