Facebook Twitter Copy URL
Copied
'In mainstream media, there thrives the idea that the degree of abuse has to be grievous to be worthy of content and media exposure'

I have been a victim of sexual harassment for as long as I can remember. It was something that I had grown accustomed to, but eventually, the sick feeling in my stomach began to eat its way slowly into my consciousness. The awareness that I have experienced different forms of abuse throughout my life was absolutely revolting. But since I had nowhere to turn, I made the assumption that everyone had gone through similar experiences and simply moved on with their lives. And so that was what I did.

This year, I became a part of Enough is Enough (EIE), a youth organization composed of sexual abuse victim-survivors and gender justice advocates. A journalism broadcast program, hosted by the anchor of a major news network, reached out to EIE for an interview with victim-survivors of sexual abuse from Bacoor National High School. As we had done in response to other media practitioners, we accommodated this request in hopes of shedding light on the issue and our advocacies.

During the actual interview last October 11, I watched as the anchor questioned the victim, alias Tom Sawyer, as he recounted his experience with a campus predator. As he narrated how he endured the abuse, I noticed how the words “O tapos?” were repeatedly asked despite his reiterations that the encounter ended with verbal harassment. It didn’t immediately click with me that she was expecting more from the story, a more “severe” kind of abuse. In the end, alias Tom was asked, “So walang nangyari? So hindi ka pinilit?” Even as an onlooker, I felt so much discomfort. How much worse was it from the actual victim’s perspective, to be slapped in the face with callous questions in the guise of pursuing the truth?

After the cameras stopped rolling, they requested that we provide another victim-survivor who experienced physical abuse, as if victims were only content-worthy if they’d gone through this specific type of abuse. Such sensationalism in pursuit of profit and ratings is wholly detrimental to the advocacy we are fighting for.

There have been numerous campaigns against campus predators and sexual abuse in educational institutions, but after gaining traction with the media, these initiatives seem to fizzle out. And all that remains are the victims left to deal with their trauma, predators still running loose in our schools, and unresolved justice.

In mainstream media, there thrives the idea that the degree of abuse has to be grievous to be worthy of content and media exposure. Needless to say, this selectivity is harmful, invalidating, and adds to the social stigma that victims of abuse have to endure.

Three years ago, I experienced firsthand the struggle of seeking justice for myself when I was subject to sexual harassment. We were advised to first settle the issue at our local barangay, then the police station. All the authorities had told me to reconsider filing a case because the abuser himself and his family would suffer if he goes behind bars. How cruel and unfair it is to demand compassion from the victim when the perpetrator decided to ruin another person’s life for the sake of their own pleasure.

Most of the victim-survivors who shared their traumatic experiences with us were reluctant and afraid to move forward with filing a complaint. Most of them just wanted to move on from the crisis they faced. Their parents, who are meant to be their primary support system, continued to gaslight and discourage them from speaking about the issue. This aversion to conflict stems from the conservative culture that is prevalent in our current society. And even if they do support their children in pursuing the filing of charges, it is not the most economical choice to make.

Even my own mother, who was with me at that time, thought it would be too challenging since initiating a lawsuit would force us to go out of our day-to-day lives to take care of the legal obligations. Additionally, for victim-survivors, especially minors, it is difficult to navigate the very technical and tedious legal procedures without the necessary support. For a working-class Filipino family barely getting by in this economy, it is indeed simpler to move on. But at what cost?

Going back to the interview, institutions like the media also tend to question the validity of abuse. When we informed the anchor that we collated over a hundred complainants from the viral Facebook post calling out the predators from BNHS, she easily dismissed their credibility. In reality, they have nothing to gain but justice. This further proves that in addition to the trauma that they bear from the actual harassment, victims have to carry the burden of having to prove themselves that they were, in fact, abused, and are worthy of support. 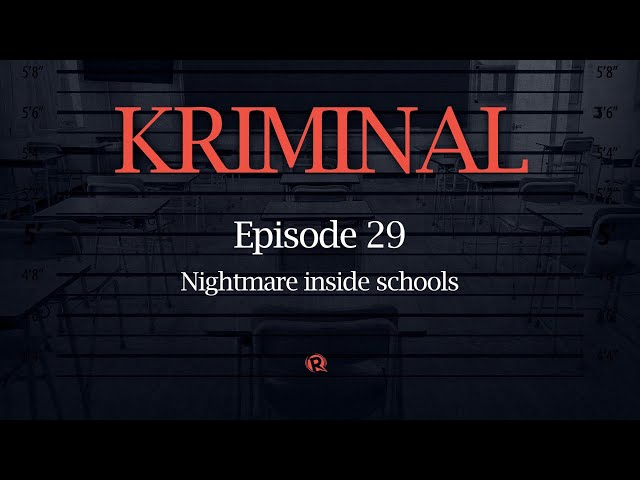 Granted, other media practitioners that have worked with us were supportive of our advocacies for gender justice and were able to handle the cases and the victims themselves more thoughtfully. Still, we call for institutions to not only claim support for victim-survivors but to also manage these cases sensitively and tactfully. To stand up for victims of abuse is to fight the stigma that presents as an obstacle to achieving justice.

Victims are forced to fend for themselves while the government, school administrations, parents, and societal stigma continue to have the upper hand. Enough is Enough urges them to come forward as we act as their support system. We stand firm in our advocacies and holistic approach, providing both psychosocial assistance and legal remedies. We recognize that all forms of abuse, regardless of the age and gender of the victim, are valid and deserving of support.

Abuse and harassment may affect everyone differently, with no definite timeline of how and when it hits you. I still carry the trauma and guilt that I have accumulated all these years. But I’m fortunate enough to have access to therapy to help myself heal. I want to assure other victims that they don’t have to endure the adverse effects of the abuse on their mental and psychological well-being. Despite the fact that I was unable to obtain justice for myself, I am now in a position where I can help others to do so.

To anyone who is in the same boat as I was, let me just share a recent realization I had. If you are one of those who were able to heal from the trauma and move on, opting to forget the entire episode of abuse, I want to let you know that I understand you. But know that there are others who are not as strong as you. Let your pain compel you to impart comfort to the anonymous multitude suffering in silence. Let your rage fuel your drive for activism towards a safer community. The only way of achieving this is if we combine our efforts and focus on the most despicable and crippling policies and politicians that hinder us from attaining justice. And it starts with you. – Rappler.com

Tine Ramas, 21, is a sexual abuse victim-survivor and gender justice advocate studying at the University of the Philippines, and a member of Enough is Enough.