[OPINION] The youth are outspoken, and rightfully so 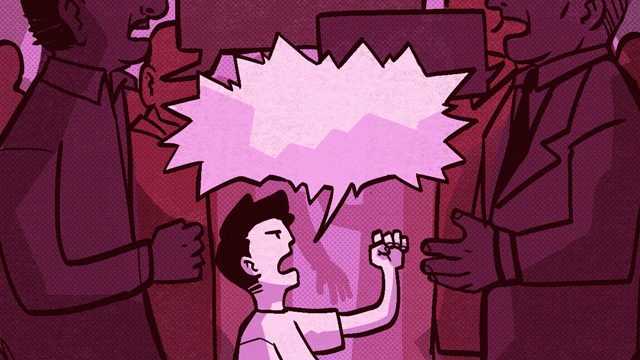 And then, on November 19, Presidential Spokesperson Harry Roque said that these tweets by the Robredo sisters — daughters of Vice President Leni Robredo — were what triggered President Rodrigo Duterte to lash out at the vice president during November 17’s presidential address. Duterte accused the older Robredo of lying about the whereabouts of the president during the typhoon’s onslaught.

The queen mother Leni, of course, came to the defense of her daughters. “They are outspoken, and rightfully so.”

Outspoken, and rightfully so. Yes, that is what we are.

Twitter made us this way. This microblogging site has always been dominated by millennials (those born from 1981 to 1996) and Generation Z (those born after 1996). This is most probably why the government — which is dominated mostly by baby boomers (born 1946-1964) and Generation X (born 1965-1980) — is threatened by Twitter posts. The Robredo sisters did not even have to use all available 280 characters in their tweets; Tricia just used 6 words, and Aika 3. But that was already enough to trigger the President of the Philippines and his allies.

One of the many amazing movements the government can witness on Twitter is the one supporting 31-year-old Pasig City Mayor Vico Sotto. He is quick to act, protects the marginalized and the poor, and always acknowledges his team in every achievement. His face is not on tarpaulins, relief bags, evacuation tents, and other government-funded materials. The Twitterverse loves this.

But when you watch or read the news, it does not feel the same. For instance, on April 1 this year, the National Bureau of Investigation summoned Sotto to explain his supposed violation of policies on the Luzon-wide enhanced community quarantine. Before this, the Department of the Interior and Local Government (DILG) also reprimanded Sotto when the young mayor ordered the limited mobilization of tricycles in his city to assist health workers and patients who needed to go to the hospital. This, even though the DILG itself could not act on the growing transportation woes of health workers and patients during that time.

Why do national leaders reject Sotto and his actions, as well as the Robredos and their opinions? It is easy: current leaders are afraid of the rise of this new breed. In the book Why Nations Fail by Daron Acemoglu and James Robinson, it is said that economic growth is typically accompanied by what they call a “creative destruction,” wherein new sectors attract resources away from the old and powerful ones, new firms take businesses away from established ones, and fresh leaders with new morals and ways replace the old. Creative destruction is challenging existing powers and standards to be able to develop and innovate, which are crucial for a country to prosper. It is this fear of creative destruction that is often the root of current leaders’ opposition to rising powers.

[ANALYSIS] In times of crises, the youth is left behind Generally, those who have been in power far longer than Sotto and other greenhorns cannot easily support Sotto’s class because they acknowledge that these young leaders are changing the standards of voters. Hence, the oldies could end up as the political losers in this revolution. They would not want that; they would protect their vested interests even if it meant standing against political and economic progress.

Acemoglu and Robinson also said that the emergence of a socially conscious middle and working class — or the “woke” — scares current leaders. In short: gusto nila ‘yung bobo at tahimik lang tayo. Therefore, the Dutertes and Roques fear the Robredos who are calling out government inefficiency, and the Sottos who are being far more effective than they are.

We are living in a Philippines shaped by the people who came before us. We have debts to pay even before we were born because of poor political and economic decisions made before we were even conceived. Today, living expenses are higher, jobs and money scarcer, and lives poorer. The baby boomers and Gen X-ers pushed us to this point. They are the reason why we are angry and demanding. They gave us a very tough world to live in. And when a person is put in a dark, dirty situation, the natural human reaction is always to attempt to get out of it. Nobody wants to stay in a horrible place for long.

Looking at the past experiences that opened Filipino youth’s eyes to our harsh society (such as Joseph “Erap” Estrada’s impeachment in 2001; the global economic crisis in 2008; the Ampatuan massacre in 2009; the pork barrel scam in 2013; the mounting cases of human rights violations since 2016; ABS-CBN’s unfair franchise denial in 2020; and the coronavirus pandemic; among so many others), we can see which causes would be lobbied for in the years to come. This may include anti-corruption systems, affordable education, press freedom, climate change, basic human rights including LGBTQ+ rights, and criminal-justice reform. These are 21st century issues that need the action of 21st century youth. Expect future Philippine politics to be all about these and more.

So, let us remain hopeful. We are about to witness a “generational turnover” — a revolution emphasized by Charlotte Alter in her book The Ones We’ve Been Waiting For — where a wave of incumbent elected officials retires and a new generation fills the table.

We need to take charge. We need to run for office, and we need to vote. We need to transform our frustrations into ambitions and goals. While it may be true that this is not an easy time to be young, it is also a great one. We are in a position where we and our ideals can improve the quality of life.

Let us continue calling out the wrong, the bad, and the ugly, so that the right, the good, and the prosperous will emerge. – Rappler.com