[FIRST PERSON] What I remember of grief Facebook Twitter Copy URL
Copied
'I wanted to make sure they had the right body. But I was told there was no way to open the bag, and that I was to take their word for it.'

The final time I drove my mother home, I carried her in a wooden box and sat her in the passenger seat of the van lent to me by my father-in-law. The box was made of plywood, coarsely painted white, with a lid on top sealed shut by several layers of clear scotch tape. When I was handed the box, the cremator said they had poured the ashes into a plastic bag that they then sealed. But I felt a thin film of dust on the box, so I wondered how tightly they had sealed the bag.

When I arrived at the crematorium the night before, my mother’s body had been waiting for me in a black body bag on a metal table opposite the cremation chamber. I asked if we could open the bag. I did not get to see my mother the entire time she was in the COVID wing of the government hospital where she was confined. I did not get to see her when she died, or when they discharged her body. The crematorium was the first time in a long while that I was in the same room with my mother, and I wanted to make sure they had the right body. But I was told there was no way to open the bag, and that I was to take their word for it.

In 2011, months before my grandmother died of hypothermia after Typhoon Sendong struck Cagayan de Oro and forced my parents and grandmother to climb on to our roof, I began having dreams of my grandmother dying. A year ago, when my father had his second stroke, I had dreams about him dying, and I would wake in the middle of the night with a fright, thinking this was the same premonition I had years ago.

There was no question in my mind that my mother would outlive my father. She was only 64 and in relatively good health. I had no dreams of her dying. On the other hand, my father is well now, and I realize my dreaming about death — that of my grandmother and then my father — was no premonition. I was never prescient about death. I was only rehearsing possible loss, imagining the pain of future wounds so I could prepare myself.

After she tested positive for COVID my mother spent four days in a government isolation facility. Her symptoms had been “mild,” but because her blood pressure sometimes went down, the doctors decided to take her to the hospital out of caution.

The month of May this year was hot. In the COVID wing of the government hospital, my mother said they did not have air-conditioning and the nurses did not allow any electric fans to be brought in. My mother said there were eight of them in the room, and except when the nurses went in to check on them four times a day, there was no one around. Most of the time the patients had to manage on their own. 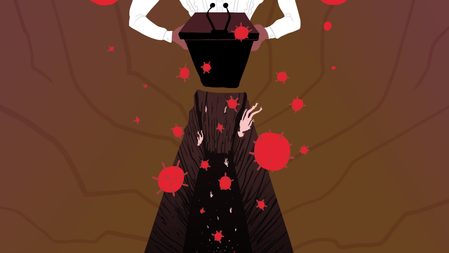 At around 4 am on her second day in the hospital, my mother was walking to the toilet when she felt nauseated and fell. When I called her later that day she had no recollection of the incident. I narrated what the nurses had told me, and she took a moment to remember that when she finally came to, she had no idea why she was on the hospital floor or why hospital staff were hovering and trying to get her up. On the third day, my mother called crying because the person who occupied the bed beside hers had died. She watched the nurses put the lifeless body into a body bag. At this point her doctors and I briefly discussed moving her to a private hospital, but then decided against it because her medicines — Tocilizumab and Remdisivir — were hard to come by elsewhere.

In the days that followed she took a turn for the worse. The doctors suggested that I come home. I took a leave of absence from work and hopped on the next available flight to Cagayan de Oro. Since everyone else in our house was still on quarantine, I decided to stay at the condo of a family friend. The condo unit where I stayed in was across the street from my mother’s hospital, and from my window I could see ambulance units rush in and out at all hours of the day and night.

Being the only one in the family who could go out to get essential items, I would drive daily to our house to bring food and medicines to my dad and my brother. I was driving on my way home when I got the call from my mom’s doctor. The doctors called to report that my mother refused to be intubated. The oxygen could no longer reach her kidneys and her creatinine was so high her body could no longer metabolize the medication she was taking. When I pleaded with her, she said she did not think her body could survive the procedure. My brother and I told the doctor to continue talking her into it, but that ultimately, we had to respect her decision.

While I was in that conversation with my mom, the doctor sent me a text that my mom might not survive the night without intubation. And although it is not in my nature to be affectionate, I told her that I loved her. It was as close to a goodbye as I could say without telling her she was very likely to die soon. She did not say anything back. I wonder about her silence to this day, what it meant and what it withheld. She did survive the night, but in the days that followed she was slipping in and out of consciousness.

Two days later, I got a call from my niece, herself a doctor who had direct access to my mother’s attending physician, who said that my mother had “coded” in the ICU. This was the exact term she used, a word I took to mean that my mother was dead. But what she said next made me think that this was a temporary matter, because they were still trying to revive her. They had used up the third of nine vials of epinephrine and wanted to ask how much more to inject. I asked why it was up to me to decide and was told that after some time, my mother may well be brain dead and perpetually comatose even if they managed to get a pulse.

I did not know what to say. I did not know how to decide on a possibility that was entirely different from the one we had been living with. Could we afford it financially, for my mother to be in a vegetative state? Did we have the emotional means to handle that kind of life? Did I say these thoughts out loud?

I am certain I gave the doctors an answer, but I do not recall what it was. Neither could I bring myself to ask. I was made to decide whether my own mother’s life would be allowed to go on, and I do not remember what I said. This decision was quickly taken out of my hands, however, when at a little past five in the afternoon of May 20, the doctor called to say my mother had died. Months before she died my mother confided that she was feeling depressed. She felt increasingly that her life had been filled with episodes of disappointment and scarcity, and the unending need to look after others. This was not kept entirely secret. After she died, her closest friends and neighbors came up to me to tell me about my mother’s depression. Maybe to ask if I knew, because I was away in Manila living my own separate life and tending to my own preoccupations. They might have also suggested, in the roundabout way of older women, that perhaps that was why she refused intubation until it was too late.

I came home again for the inurnment service in June, 40 days after my mother died. We could not have it right away; my 9-year old nephew had remained positive for COVID for some time and I had to leave town to take care of things. I could not cry as we buried her urn. My brother was quietly breaking down and my father looked shell-shocked. I was leaving for Manila the next day, and then for New York in two weeks. There were insurance policies to check and claim against, and we had loans to settle. Someone had to keep it together.

When I was growing up in Cagayan de Oro we lived near a coconut plantation. Every so often they would cut rotting trees that were no longer giving fruit. They did this in the afternoons as I took my nap. The high-pitched gnawing, grating sound of the metal chainsaw would find its way in my dreams somehow, until I would be woken up startled by the unmistakable thud of a tree trunk as it hit the ground. It all sounded so distant — the shrill metallic sound, the ensuing thud of the trunk — but for some reason I could feel all of it in my gut. This to me most closely resembles grief. – Rappler.com

John Philip Baltazar is a contracts lawyer. In his spare time, he writes fiction and creative non-fiction.