[New School] Fighting stereotypes: How to be a true LGBTQ+ ally 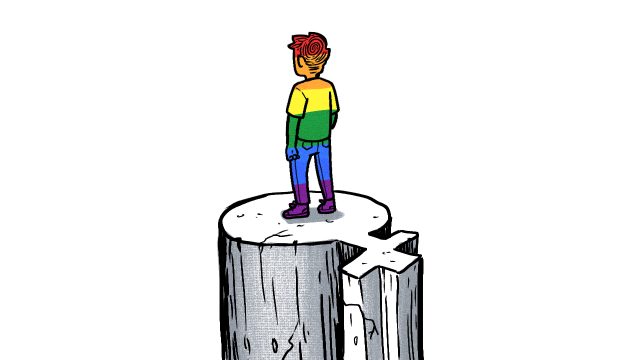 When a friend of mine came out to me, the first thing that popped into my head was that I’d never expected them to be gay. They dressed like all my other guy friends. I’d never seen them wear makeup or show an interest in it. They were athletic and liked video games. They had traits I’d just never related to a gay person.

I once thought that I could instantly tell who was gay in a group of people. Gay, for me, was people like Vice Ganda and Awra. Tropes like the “gay best friend” was my guide to spotting the gay ones among my peers. Without knowing it, I had fallen for the trap of stereotyping.

But since my friend’s coming out, I started to view the LGBTQ+ community differently. More and more diverse representations of gay characters have also been introduced since, especially on social platforms like Tiktok. Social media debunked the stereotypical, one-dimensional gay I’d familiarized myself with and introduced me to all sorts of individuals from the LGBTQ+ community. That was when I realized that femininity did not equate to gayness – that how masculine a person appeared did not necessarily correspond to their gender identity. Although there truly are gay people out there who prefer makeup over sports, not every gay is that way, and these two kinds of people are equally valid.

Gay people can prefer masculine traits over feminine ones, vice versa, or even be a bit of both. I mean, some girls in my class can beat the guys in games like Call of Duty and Mobile Legends, while some guys are better at cooking and sewing than us. Times have changed. The roles of men and women are no longer as heavily divided. Women now have a more active role in society, while men are starting to partake in responsibilities at home.

It’s about time the LGBTQ+ experience change, the change that brings out their truest selves and gets rid of stereotypes and false impressions. This change can be achieved with everyone’s help, including that of straight allies.

How to be a true ally

A person’s ability to become an ally depends on how open-minded and willing they are to change their prejudices. I had only recently understood that I wasn’t always accepting of the LGBTQ+. My friends have told me that I’ve had my fair share of slip-ups, however unconscious, which have made them feel uncomfortable. But I didn’t like being corrected back then, which meant I was also subconsciously assuming that they were just being sensitive.

But who was I to undermine how they felt and overlook my wrongs?

The road to becoming an ally is challenging. Despite this, change is needed, and it doesn’t have to be a grand gesture. Even the smallest act of kindness can help in building a safer community for the LGBTQ+. Although I cannot fully empathize with the LGBTQ+, I can understand that being seen as someone you’re not can be upsetting.

Being vocal about the misconceptions and inaccuracies about the gay community can help people recognize this community’s value and worth. Don’t get me wrong; they do not need to prove themselves or seek validation – but helping them to be treated like any other human being would be better for everyone. What we also need to work on is accepting the LGBTQ+ outside of our group of friends. I thought that being friends with some members of the LGBTQ+ already made me an ally, but if I don’t stand up for them or support their beliefs, then I am no different from someone who simply tolerates them, and tolerance isn’t enough. I know that there are laws out there that help the LGBTQ+ community be acknowledged, but to change the hearts and minds of people is also vital in the pursuit of equality.

I realized that it really takes courage to correct the people around me. Thoughts and fears can cloud my judgment and tighten my throat. But I can no longer stand the injustice and discrimination done toward the LGBTQ+. Everyone has a right to be respected, no matter your gender, sexuality, race, etc. Instead of idly sitting back, a proactive approach is what we need.

In the words of Daniel Radcliff, “You don’t have to be gay to be a supporter. You just have to be human.” – Rappler.com

Erika Jimenez, 16, is an incoming Grade 11 student at De La Salle Araneta University, and a former news writer of The Seed. She enjoys writing in her free time and is currently studying how to be a podcast editor.