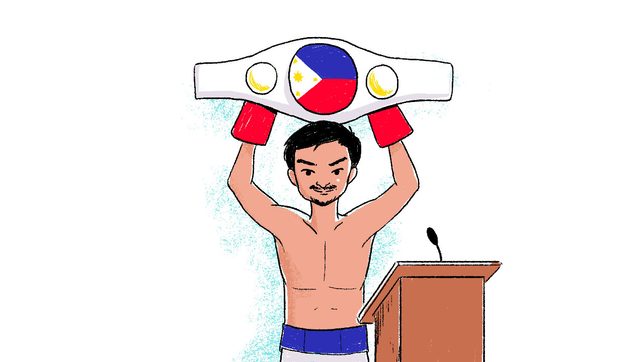 In his announcement on September 19, Filipino boxing legend Emmanuel “Manny” Pacquiao expressed his hope of scoring another title. This time, however, instead of carrying the banner of a patriotically united Filipino nation, he carries the standards of a bitterly fragmented political party; instead of crossing gloves with a solitary opponent, he will be crossing political willpower with a plurality of rivals; and instead of the title “World Champion,” the fighting senator shall be vying for the title “President of the Republic of the Philippines.”

From his poverty-stricken childhood, eating one meal a day and sleeping on the streets, to his current status as a billionaire, Pacman has been hacking down Goliaths in the ring and beyond. His rags to riches story has inspired many a Filipino. His triumph over the adversities of life cements him as the gold standard for disciplines requiring a Herculean mentality – disciplines such as running the government of a country, for instance.

The measure of a commander-in-chief, however, goes beyond the mettle of one’s spirit. No one has made this clearer than the legendary Miriam Defensor-Santiago herself. During her presidential crusade in 2016, in a campaign rally at the University of Cebu, the late Iron Lady laid down the three qualities that make a good president, viz. academic excellence, professional excellence, and moral excellence.

Coerced by the fetters of poverty, Pacquiao had to drop out of his secondary education in his youth. Nonetheless, the Department of Education had conferred upon him a high school diploma after he took and passed a high school equivalency test in 2007. A year later, he enrolled in a course on Business Administration at Notre Dame of Dadiangas University. After one year, however, he withdrew, expressing his desire for an informal alternative learning program in order to focus more on his boxing career. This wish came true in the form of the Expanded Tertiary Education Equivalency and Accreditation Program (ETEEAP) that allowed Pacquiao to complete his tertiary studies in 2019, graduating from the University of Makati with a Bachelor’s Degree in Political Science.

While his efforts to attain education are laudable, the question with regard to the adequacy of informal learning in grooming him for the highest office still stands. With a surplus of college graduates from premier universities on the unemployment line – many of whom possess sterling academic credentials – why would the Filipino people hire someone who has blatantly displayed higher interest in boxing over studying to handle the reins of their country for the next six years?

[OPINION] ‘The best and the brightest’ In his 11-year stint in Congress (six in the House of Representatives, and five in the Senate), Pacquiao had maintained a notoriously consistent absentee record. Representing the Lone District of the Province of Sarangani, the then neophyte lawmaker tallied a total of 60 missed sessions during his first term in the 15th Congress; he expanded this record on his second term, having been present only once in 52 session days during the last leg of the 16th Congress. As a senator, the People’s Champ incurred a grand total of 22 absences – more than any of his colleagues in the Upper House.

In defense of his truancy, the presidential hopeful had asserted that he needed to oversee his Pacman Village, a housing program in Sarangani and General Santos that Pacquiao himself had personally funded. Pacquiao added that his record as a senator speaks in his defense; purporting co-authorship of 96 bills, he argued that in spite of his absences, he was still able to fulfil his legislative duties.

It is indubitable, however, that the presidency is entirely different from the legislature. Presence plays a pivotal role in executive jurisdiction. After nearly six years under a commander-in-chief with slumbering habits that make Sleeping Beauty blush, the Filipino nation cannot afford to be cradled by another absentee father.

In addition to the above-mentioned housing program, the fighting senator’s foundation also sponsors COVID-19 relief operations and human trafficking victim support. In his entire career, many of his earnings went to charitable causes up to and including scholarship grants, agricultural apparatuses for farmers in underprivileged areas, churches, hospitals, disaster relief, environmental causes, etc. The aspirant presidential candidate had so visibly and religiously practiced the virtue of charity that even his boxing archrival Floyd “Money” Mayweather himself admitted that charity “is just Manny.”

A proud pastor and Evangelical Christian convert, Pacquiao would most certainly attribute his generosity to his faith, as he does with his rationale for his legislative votes and policies. Citing his support for capital punishment, for instance, the senator stated that “even Jesus was sentenced to death.” He also used a purported biblical basis for his argument on gender dress appropriation. In his apology for those affected by his comparison of members of the LGBTQ+ community to animals, Pacman confirmed that his opposition to same-sex marriage was in fact biblically-inspired.

It would be to the interest of the members of a free nation intent on preserving their democracy to contemplate whether it’s better for the philanthropist to continue with his charitable advocacies or for the politician to pursue his agenda of establishing a “sola scriptura” rule in a constitutional and tolerant republic.

For want of a champion in fulfilling the Filipino dream of economic prosperity, societal justice, and national unity, 62 million voters registered for the upcoming presidential election. It is said that if you just shoot for the moon, even if you miss, you’ll end up among the stars. In electing the leader that shall spearhead the Filipino exodus to the Promised Land, the deepest prayers are offered that the credentials of whosoever that leader may be would not make Juan de la Cruz’s aspirations be a mere suntok sa buwan; and that if we do land among stars, it wouldn’t be the result of a knockout punch of incompetence, inadequacy, and indecency. – Rappler.com

Ian Dave A. Gultiano, 18, is a Philosophy seminarian from St. Vincent Ferrer Seminary in Jaro, Iloilo. You’ll find him killing time in one of the more quiet nooks and crannies of a the seminary, indulging in the works of Edgar Allan Poe, Arthur Conan Doyle, Agatha Christie, H.P. Lovecraft, or Fyodor Dostoevsky.