Did government go too easy on Iglesia ni Cristo? Facebook Twitter Copy URL
Copied
It was all a display of power by a church, a government, and a public that found its voice online

For 3 nights, Iglesia ni Cristo (INC) members blocked EDSA, Manila’s main highway, even as the city mayor went out of his way to grant them a permit and two presidential candidates expressed statements of support.

Cops and intelligence officers were deployed to monitor the situation – but only to watch out for other groups that may join and take advantage of the crowd, such as the usual anti-government groups.

On Day 5 of the protest that began in front of the Department of Justice building on Padre Faura, Manila, on Thursday and stretched to the long weekend, the INC ordered its members to pack up and go home. Security officers and impatient commuters heaved a sigh of relief.

Did the government go too easy on Iglesia ni Cristo? Should any group be allowed to occupy EDSA? Why didn’t authorities immediately mobilize to barricade major streets as soon as the INC leadership announced – publicly! – that they were moving to EDSA from Padre Faura? At that point, they had not even secured a permit to hold a rally in the EDSA-Mandaluyong area.

A top security official conceded it was a difficult situation. A dispersal was out of the question because they decided that it was best to leave government and Iglesia discuss the matter.

“We can always cite rule of law to justify tough measures that we may be tempted to take. But there is a counterveiling right to peaceful assembly that would have to be considered. I guess in the end it would be best to settle the issue amicably,” he told Rappler.

Metro Manila residents who already struggle with traffic every day were subjected to the most horrendous traffic logjam on the worst day – payday Friday – to be trapped on EDSA. They lashed out against government for its so-called special treatment of Iglesia.

Compare it to smaller protest rallies that leftist groups hold during the President’s annual State of the Nation Address (SONA), for example, when the government would not let them near barricades and water cannons are par for the course.

But National Capital Region Police Office (NCRPO) chief Joel Pagdilao argued that even leftists, who call for the overthrow of government, are allowed to hold their programs.

Besides, it’s not right to compare the INC protests to those staged by leftists, he said.

“They were not critical [of government]. It’s a religious group. Madaling araw nandoon sila sa Shaw Boulevard Crossing so sinabi natin na wala silang permit (At dawn they were at Shaw Boulevard Crossing, and we told them they did not have a permit). They waited for Mandaluyong City to issue permits. There was constant dialogue,” Pagdilao said. 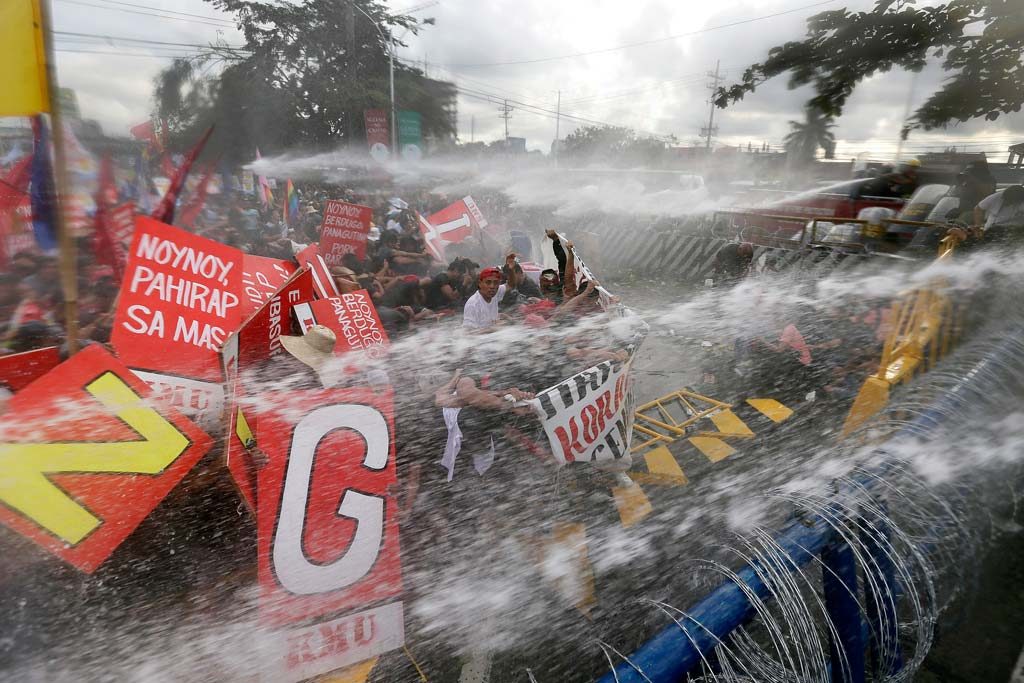 Similar sentiments were expressed by security officials interviewed by Rappler.

While netizens blew their top over the traffic that INC caused and friendships were torn apart online as INC members and critics unfriended each other, soldiers and cops had no reason to worry as long as the protest was “peaceful.”

“Besides, this is not a group that will overthrow the government,” he added, noting the festive mood on EDSA Crossing where families were seen holding picnics.

Suffice it to say that if the Catholic Church decided to hold similar mass actions, it will probably get the same kid-glove treatment so long as the protests remained “peaceful.”

A display of power

INC flexed its political muscle to show its strength to a president they voted for but one who proved to be unwilling to pay back. The protest was about INC demanding Justice Secretary Leila De Lima to stay out of an abduction case filed by an expelled INC minister against INC leaders.

Political pundits watched in suspense as to who was going to blink first, especially in the midst of a political season gearing up for the May 2016 presidential race. Candidates naturally want to court Iglesia’s bloc vote.

“We only come in when it becomes a matter of national security. It did not reach that point,” said a military officer who said they’ve always considered the INC rally a police matter. Military and police sources denied reports about INC’s supposed recruitment of cops or soldiers to overthrow government.

Even as there were speakers who criticized government on stage, an officer clarified that political matters are for government officials in Malacañang to assess.

“Ang utos lang sa amin bantayan baka may mag-take advantage (We were only ordered to watch out for people who will take advantage of the situation),” he said.

Here’s what got me thinking: For one intelligence officer, the problem was not so much that the government was too easy on INC as it was about the failure of the Metro Manila Development Authority (MMDA) to reroute traffic Friday night.

Would the netizens have cared so much about the INC protests if these did not choke the streets? If the members stayed in their limited space on Padre Faura, would so many people have weighed in on INC’s issues about the separation of church and state? It’s a battle that INC has arguably lost – at least online – as it was interpreted by critics as its refusal to abide by the rule of law. As it became unclear how the INC protest was going to end, a security officer admitted his mood changed on Sunday, August 30, when the INC crowd got bigger.

That night, President Benigno Aquino III called an emergency meeting in Malacañang. The national security adviser, the defense chief, the chiefs of the police and the military were present. But so were, curiously, the commanding generals of the army, navy, and the air force who had nothing to do – at least not their tanks and combat choppers – with a supposedly police matter. This was all captured in a photograph that Malacañang released Sunday night.

Was Malacañang too worried about the situation that it was ready to use government force on Iglesia ni Cristo? Or was the photo meant only to send a message? I’m inclined to believe it was the latter. If Malacañang was worried at all, I doubt it would even think about taking photos and releasing them online.

Whatever the case, the INC members ended their protest the following day. (READ: Inside Story: The end of Iglesia ni Cristo protest)

In the end, it was all a display of power by a church, a government, and a public that found its voice online. Who won? Who gave secret concessions? The coming months will probably provide the answers. – Rappler.com