I’m not from one of the best schools. So what? 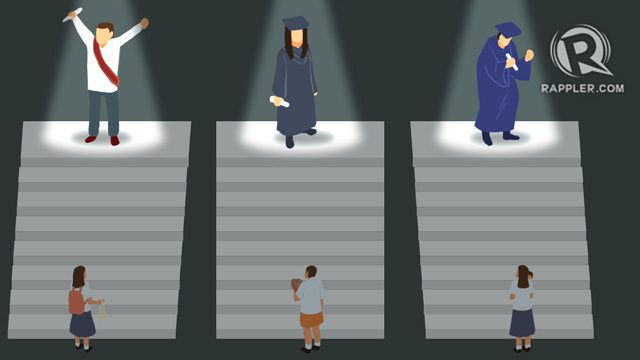 Facebook Twitter Copy URL
Copied
No one should be discriminated against on the basis of what he or she has achieved because most of the time, achievements are made possible by opportunities, which not a lot of us have

I am proud because I have to be.

If circumstances were kinder to me, I know in my heart I would have been a colorful graduate of Ateneo or UP or La Salle or UST or whatever proud university mafia exists in the company you currently work for whenever it’s the UAAP season. But that was not possible for me.

At one point, my family could have been among the poorest in this country. Not because my parents lacked the will, wit, and energy to work but because life was unfair. We went hungry several times in a house that was barely a home, with a window that was barely a window, and a door that was barely a door. No electricity for years at a time.

I would come home early from school to wash the uniform sets that my siblings and I each had just one of, just so we would have something to wear again the next day.

I would wake up in the middle of the night if there was a cold storm because it was destroying the bamboo window in our bedroom and the water was coming in. I would try to keep it from flying by holding one end of it while half asleep.

Even if I carry a valedictorian badge with me, which should give me a tuition fee discount, it still would not have been enough to send me to a top university. Back then, we may have not even been able to afford a public college because that would still mean a daily allowance for me too.

I am an alumnus of AMA University. It’s the sort of school that somehow I feel like people expect me to whisper about whenever they ask me where I went. But the only reason that I got into college was because I was promised a full scholarship in AMA. So, I am eternally grateful for it. I was made to be proud.

I am proud because I came from the littlest public school in Bago City, Negros Occidental. It was so small that no one even bothered to tell the students that there were pre-exams for the big universities. I guess the thinking was that no one usually gets out of that little town anyway, let alone make it to college.

But being proud of success because it happened in spite of challenging circumstances signals that discrimination exists.

What about the promising students who weren’t able to get a bachelor’s degree? What about those who shouldered early on paying off the family’s debts and house bills, so getting into graduate school, medical school or law school were not options even if they wanted it?

Poverty is a hindrance, and it reveals two conflicting sides. I’ve been successful because I was able to weather the storm. I’m a failure because, by some popular standards, I may have had more doors opened or may have achieved more if I came from one of the top universities in the country.

A Facebook post from a UP graduate who did not attend his graduation went viral. He said he boycotted his final rites because his success is “nothing but a reflection of the failure of others.”

My success is also an indication that many of my studious high school classmates never got their chance to go to college – some more so than other college classmates who did not seem to value the opportunity enough. They are discriminated in life for it – for not wanting a college degree enough, for not finding a way, for having imperfect grammar, for choosing to have a family early, or other inconsiderate assumptions.

No one should be discriminated against on the basis of what he or she has achieved because most of the time, achievements are made possible by opportunities, which not a lot of us have. Everyone struggles with something.

We all have different circumstances and we all deal with them differently. Many times, discrimination is a product of ignorance.

Whatever life has offered each of us, we’re better off accepting the differences and being more encouraging of each other. – Rappler.com