When Duterte dines with media 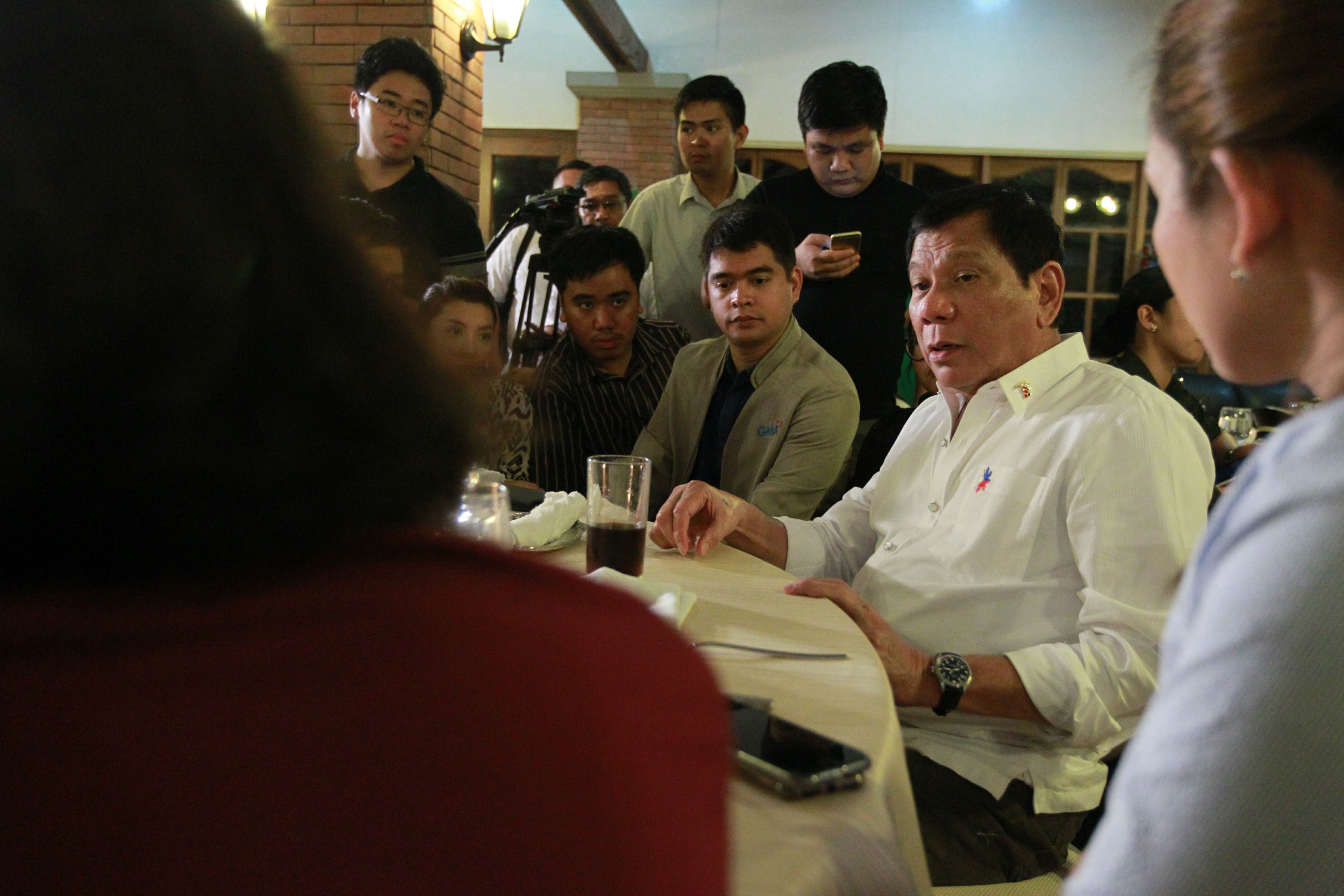 On August 21, a rainy Monday night, President Rodrigo Duterte walks into the Malacañang Golf Clubhouse with his right hand raised to the people in the room.

No need for them to stand up just to welcome him, he says, surrounded by security personnel and Malacañang staff.

“I’m not a priest anyway,” he quips as he makes his way in.

The President reserved this particular courtesy for his guests that night – journalists from various media companies, the same media he has publicly rebuked and threatened; the same media his rabid online defenders would call his enemies.

That August 21 dinner is the 3rd time he has invited members of the press to spend an evening in his company.

It’s more proof that what the President says in public is not always consistent with his actions.

In his presidency so far, Duterte has threatened media of “karma,” warned that he would file estafa charges against TV network ABS-CBN, vowed to crack down on owners (now former) of the Philippine Daily Inquirer, and claimed that Rappler violates constitutional provisions on media ownership. (READ: Lies about foreign ownership a form of harassment – Rappler)

Duterte’s frustration with the media is real and many don’t doubt he will make good on his threats. But like any politician, Duterte knows he needs the media. His constant interaction with them has also created a certain rapport, a rapport the politician in him will always seek to cultivate.

In his 3 dinners with media, Duterte has been all playful charm and good humor.

Gone are the threats and insults in his speeches. Instead, he joked around with reporters, listened, and gamely answered questions. He teased reporters, such as when he offered ABS-CBN reporter Doris Bigornia the post of social welfare secretary, and shared a little bit about himself and his life in Malacañang.

But Duterte is selective about who he invites to these dinners. The first one, held after his first State of the Nation Address, involved around 8 journalists – those who covered him during the presidential campaign and Davao-based journalists he has known since he was mayor.

During the second dinner held on November 15, a bigger group  of 20 was invited. This was composed of the campaign reporters, Malacañang beat reporters, and certain reporters who covered Duterte in out-of-town events.

These dinners were meant to be private and were thus not included in his schedule of events blasted to the Malacañang Press Corps (MPC). The conversations were all off-the-record, unless Duterte said he was willing to go on-the-record on specific topics. In the last two dinners, the President granted a press conference, allowing his guests to ask him “anything under the sun.”

Such social gatherings with a sitting president are not new. All presidents had their own ways of getting to know reporters who covered them.

One of the first things Benigno Aquino III and Gloria Macapagal Arroyo did in their day was to have dinner or lunch with MPC members. Fidel Ramos hosted a few media luncheons that were not limited to the MPC but also included editors, columnists, and journalists from international news organizations based in Manila.

During his brief term, Joseph Estrada would sometimes invite the MPC to lunch, followed by an interview at the Premiere Guest House which served as his official residence.

During her term, Cory Aquino even took the trouble of preparing liver paté for media when she hosted a dinner for them.

In contrast to his predecessors, Duterte is yet to attend an MPC Christmas party or invite the entire MPC to dinner. Meeting Malacañang media was not also a priority in his first few months in power.

In fact, his “boycott” of them, which began during the transition period in May, ended only a few months after his oath-taking, on August 1.

Duterte is particular about the journalists he invites to these dinners, so much so that he himself has a hand in making the guest list.

According to two Palace sources, Duterte himself would add and subtract names from a list of invited journalists handed to him by presidential communications staff.

Duterte has so far not excluded reporters from media outfits he has publicly criticized. He has even become personally acquainted with some of them, especially those who covered him during the campaign.

One can only speculate why Duterte invites media to dine with him.

Does he use media to pick up information, to get an idea of the prevailing public sentiment? Does he use it to get feedback? To be sure, Duterte asks his own questions during these dinners. He also listens to responses and reacts to them.

Or is it the other way around? Does he use it as an opportunity to feed lines to the media, to explain himself to them with the hope that this could “guide” their coverage of him?

Or perhaps it’s a little bit of both. It was during the last media dinner when Duterte was first asked whether or not he would attend the wake of Kian delos Santos. His explanation to reporters then made it to subsequent speeches, whenever he touched on the Caloocan teenager’s death.

Or perhaps it’s just Duterte being the politician he is. His mayorship and now his presidency has taught him that media will constantly be breathing down his neck.

He sees the same set of faces covering his official events, reads the same names in bylines of articles about him, his decisions, his words.

Politicians will always want to keep the people who work close to him even closer.

He is still adjusting to his place under the national spotlight, with its new set of journalists, higher stakes, and more unknown variables – a world away from the comfort of Davao with its smaller media community and more manageable bureaucracy.

Only time will tell if Duterte’s attitude to the media will change and how media will respond to whatever happens next. – Rappler.com