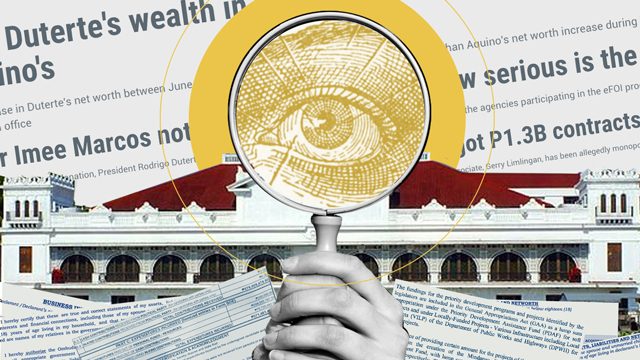 Facebook Twitter Copy URL
Copied
It's important to keep an eye on what public officials are up to. Along the way, we also test the government's commitment towards transparency.

It’s a task journalists and researchers have gone through to complete a story: requesting official data from government.

From quick statistics to crucial documents, getting official information is a story in itself.

We in Rappler, especially those in the Research Team, have experienced a mix of gladness and sadness over acquiring these files. Along the way, we also test the government’s commitment towards transparency.

First off, the SALNs or Statement of Assets, Liabilities, and Net Worth. It’s meant to give a peek into the wealth and lifestyle of public officials, with details such as properties they own and their total net worth.

It’s such a powerful document that a Chief Justice of the Supreme Court has been ousted for not declaring certain assets in his SALN. Just this year, many top officials have been questioned (and almost went through impeachment) over the contents of their SALNs.

From our end, the difficulty of getting SALNs varies, depending on which repository agency you get them from.

For instance, Malacañang releases SALNs of Cabinet members and other executive officials upon request. So do the Office of the Ombudsman (for the SALN of the President, Vice President, and heads of constitutional bodies) and the deputy ombudsmen in Luzon, Visayas, and Mindanao (for local officials).

The Supreme Court issues SALNs and Personal Data Sheets (PDS) of justices upon request, but only of the current ones. The SC had denied requests for copies of ex-justices’ SALNs. But it can be granted if the request contains the considerations under Republic Act 6713 or the Code of Conduct and Ethical Standards for Public Officials.

So far, the most “uncooperative” institution is the House of Representatives. Every year, it releases summary tables of the assets, liabilities, and net worth of its nearly 300 members, which are useful to determine the richest and poorest lawmakers in the House

However, we have yet to secure the SALN copies of all representatives in bulk from a central source. We have been told to request copies from each congressman. It’s a daunting task for us and our interns to follow up on every legislator, even to the point of doing door-to-door visits in the House.

In contrast, the Senate releases the SALNs of all 24 senators in one go. 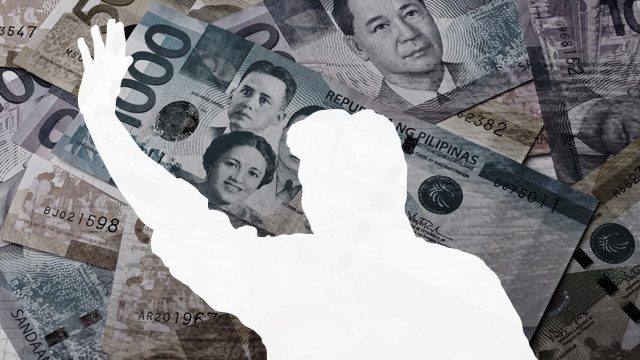 Another document used to assess the probity of an elected official is the Statement of Contributions and Expenditures (SOCE). Winning and losing candidates are required to list in their SOCEs their election campaign contributors and the amounts they received.

Rappler has written many stories using SOCEs as reference. We reported on the background and clout of certain personalities who donated to campaigns, especially of winning candidates.

We also looked into the limitations and weaknesses of campaign finance rules.

Nonetheless, the Commission on Elections (Comelec) has been very helpful and accessible in releasing SOCEs, as well as election results, certificates of candidacy, election-related statistics, and other documents.

It’s a good thing that the Freedom of Information (FOI) program has enabled access to data and documents in the entire executive branch.

To be fair, pre-FOI, we have been able to request for information through request letters sent personally, via fax or via email. Some agencies even upload reports and statistics on their websites regularly.

President Rodrigo Duterte’s Executive Order No. 2 added more features such as an online portal to file FOI requests and a 15-day period for agencies to respond.

Rappler invoked the FOI, for example, in pursuing a story on President Duterte’s foreign trips.

Based on our experience, while some agencies still need to iron out their workflows, many have abided by the FOI tenets, such as responding through email or the eFOI portal, and providing requested data promptly. (READ: How serious is the Duterte administration about FOI?)

But we encountered problems in requesting data from the Philippine National Police (PNP). While it provided aggregate figures, it denied our request for breakdowns of the data.

Extending FOI provisions to all branches of government – both national and local – through an enabling law would truly promote the people’s right to access to information. Part of this proposed FOI law, for instance, is a provision compelling lawmakers to upload online the full details of their SALNs. The bill remains pending in the House. (READ: Why the Philippines needs a freedom of information law)

It’s important to constantly keep an eye on what the government does and what its officials – both elected and appointed – are up to. We should hold them to a higher standard as public servants and our representatives in government.

With the FOI enabling access to information, and despite difficulties we encounter along the way, we at Rappler will continue to keep public officials in check, making them accountable if needed. – Rappler.com