[OPINION] We’re not here to be your friends 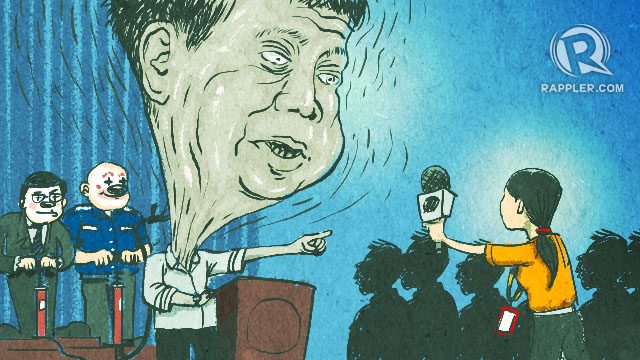 Facebook Twitter Copy URL
Copied
It's time we call out reporters who are overly chummy with government officials, who ride the wave of this administration's popularity at the cost of critical and impartial reporting and commentary

In recent weeks, we’ve seen an almost comically obvious crackdown on the critical press. Rappler has been banned from presidential events as it faces the threat of shutdown and now a tax evasion complaint. President Rodrigo Duterte is back to scoring the Philippine Daily Inquirer and ABS-CBN in his speeches.

The public is made to doubt the credibility of media groups that point out this administration’s wrongs because doing so, according to the spiel of diehard supporters, is unpatriotic, destructive, and unethical.

People are eager to punish critical reporters, but what of the other side? What of the reporters who sound as if they are supportive of the administration?

Take this interview by Leo Palo, a radio reporter for dzME. On March 7, Palo invited Presidential Communications Secretary Martin Andanar to his show to talk about Special Assistant to the President Bong Go’s possible Senate bid.

The topic, being one of public interest, is acceptable. But what is cringe-worthy are the praises sung by Palo, a Malacañang reporter, for the President’s right-hand man.

(Secretary Bong Go is, I’ll say it, a man of few words. But he really acts, especially in public service. He doesn’t need to talk, he really acts.)

He went on to talk about the “worldwide support” for Go when he faced the Senate during the hearing on the Philippine Navy frigates deal.

Palo, reading out a comment from a listener, even relayed a suggestion to Andanar.

(What if we just establish, like this comment, Secretary Andanar: ‘You should put up a Go for Senator Bong Go Movement.’ This person wants a movement.)

With Andanar’s own effusive compliments for Go and Palo only reading out pro-administration comments from listeners, the entire interview came across as overwhelmingly in favor of the government.

Palo did not even discuss Go’s alleged involvement in the frigate deal, subject of the hearing, or ask any questions about it. In fact, he didn’t ask Andanar any substantive question at all.

The interview was largely a conversation propping up Go’s possible Senate run.

Palo and Andanar even discussed a possible campaign slogan for Go (“Gorabels 2019”) and a campaign jingle (“Wake me up, before you go, go…”).

This is not the only case of such pandering media.

Angelo Palmones, in a show on dzRH, labeled reports on Go’s alleged involvement in the frigate deal as “fake news” as he interviewed Presidential Spokesperson Harry Roque.

(Like this very glaring fake news. Because in the Senate hearing, it was clear that there was really no basis but the Philippine Daily Inquirer still stands by their report. What can the public or those subjected to such news do about such fake news?)

Palmones, rather than take a neutral stance on the issue, went ahead and labeled the Philippine Daily Inquirer as a publisher of “fake news” and declared there was no basis for its report. He echoed the government’s position rather than allow his listeners to make up their own minds by discussing the facts of the hearing.

Objectivity, impartiality, as most people understand these terms, mean you don’t take a side. You’re not biased for or against a person.

Another standard of good journalism is a reporter’s ability to be critical. You report not just the newsworthy words or actions of a public official, but also point out the possible repercussions and pose questions with the interest of the public in mind.

A reporter can be objective and critical at the same time. But a reporter can’t be a suck-up to government and be critical too.

A reporter who is too chummy with public officials, who allows the wave of an official’s popularity to get in the way of critical reporting, deserves the suspicion and doubts of the public they are supposed to serve.

Consumers of news should watch out for commentators, reporters, and anchors who let public officials get away with an inaccurate or unfair statement, who ride along with the government’s script or narrative, and who conveniently forget to ask questions that go to the heart of a controversy.

Nowadays, it’s too easy to be pro-government. You’ve got a charismatic president whose popularity will protect you. You’ve got officials who are more likely to be interviewed on your show if they know you won’t ask tough questions. You’ve got a mass of online accounts that will “like” your pro-government Facebook post or egg you on when you commend the President.

Our current political environment rewards those who side with power and punishes those who dare question it.

It’s hard to be critical. You’ll get punished for it, whether in the form of daily online death threats or a government crackdown. The President will threaten you in his speech. The trolls will run after you and your family. You might lose your job.

Critical media are branded by rabid Duterte supporters as “bayaran” (paid hacks). Yes, media corruption is real. But the government is yet to prove that reporters critical of them have been paid by their enemies.

And never forget, “bayaran” can go both ways. If reporters can be paid by politicians to destroy their opponents, politicians can also pay reporters to report favorably on them. The public should be equally wary of the latter, as with the former.

It doesn’t help that public officials have taken to skewing the relationship between government and the media.

Case in point, Presidential Spokesperson Harry Roque’s oft-repeated assertions that I “lost” my relationship with Duterte and now have to suffer the consequences, i.e., no more access to the President.

Such assertions are a disservice to the public and a total misunderstanding of the role of journalists.

Roque, who defended journalists’ rights as a former human rights lawyer, seems to think that journalists should protect their “friendship” with government officials more than their role as government watchdogs.

“They were together since the elections so the President treated Pia like his own granddaughter. The President really felt he was betrayed,” he said the next day on UNTV.

The Constitution does not grant rights to media on the basis of how great their relationship with the government is. As Roque himself said in a press conference after I was banned from Malacañang, personal dislike is “not a valid reason”  to bar a reporter from the Palace. Of course, when it was revealed that Duterte himself ordered the ban, Roque changed his tune.

For Roque, it seems, relationships with the powerful trump all other considerations. Perhaps such thinking is acceptable for politicians. But journalists are not politicians.

It’s true that when a reporter’s source feels they were misquoted or treated unfairly, they have a right not to reply to the reporter if they reach out again. But Duterte’s act of totally prohibiting Rappler coverage goes far beyond this right. It’s overkill and, as the National Union of Journalists in the Philippines says, it’s petty.

It’s true that, since I began covering Duterte in September 2015, we developed a certain rapport. I’ve been to his house and his favorite bar, met his family, ridden in his car and helicopter, even shared a drink with him.

It’s normal for reporters to get to know the person they are covering. It’s even been rewarding, being able to observe such a fascinating person up close.

But Duterte and his underlings should never for one second expect that reporters would prioritize the preservation of this rapport over their job to report critically about his manner of governance.

What’s more, Duterte and his underlings must respect that professional distance and not take critical articles personally.

I continue to consider some officials in this administration as my friends. My respect for them grows when they don’t let Rappler’s reportage affect our relationship. They tell me they understand that we are just doing our job.

It’s this class of public servants who really deserve the title. They may get their own bad press at times, but they will never lose the respect of journalists. – Rappler.com