Speaking about the PH media situation and Rappler in Hong Kong

Dec 3, 2018 11:07 AM PHT
Alexa Villano
Facebook Twitter Copy URL
Copied
There is still hope, despite the challenges thrown at us 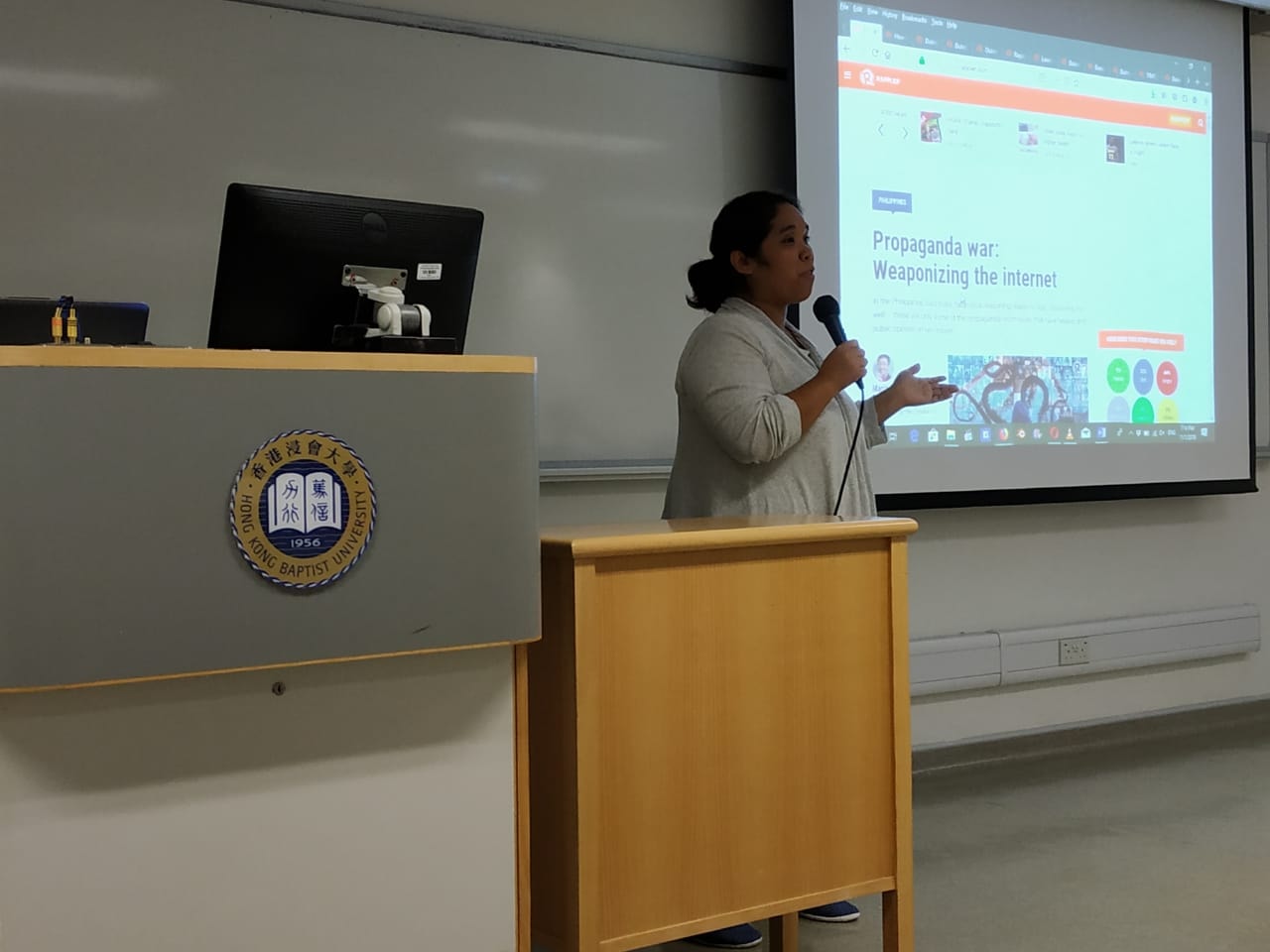 This was the question posed by my Indian journalist colleague as we left for Hong Kong International Airport.

“I won’t lie. Of course I am afraid. But we’ve been through this early this year. This is not new,” I told him.

He was referring to the cases filed against Rappler. When he asked me this, I was on my way back to the Philippines. Just days before our depature, news came out that the company and our CEO and executive editor Maria Ressa was about to face the possiblity of being charged for tax evasion.

And indeed it happened. On November 29, it was announced that Maria and Rappler Holdings was charged with 4 tax cases, as well as a fifth in Pasig. Early this year, the Securities and Exchange Commission also revoked the company’s license to operate. The case is still currently pending.

Back to the story. The Indian journalist and I were among 9 journalists who were hosted by the Hong Kong Baptist University for two months for a journalism fellowship. In the program, we were required to do a final presentation. In between, we had classes and gave sharings to students about our experience. 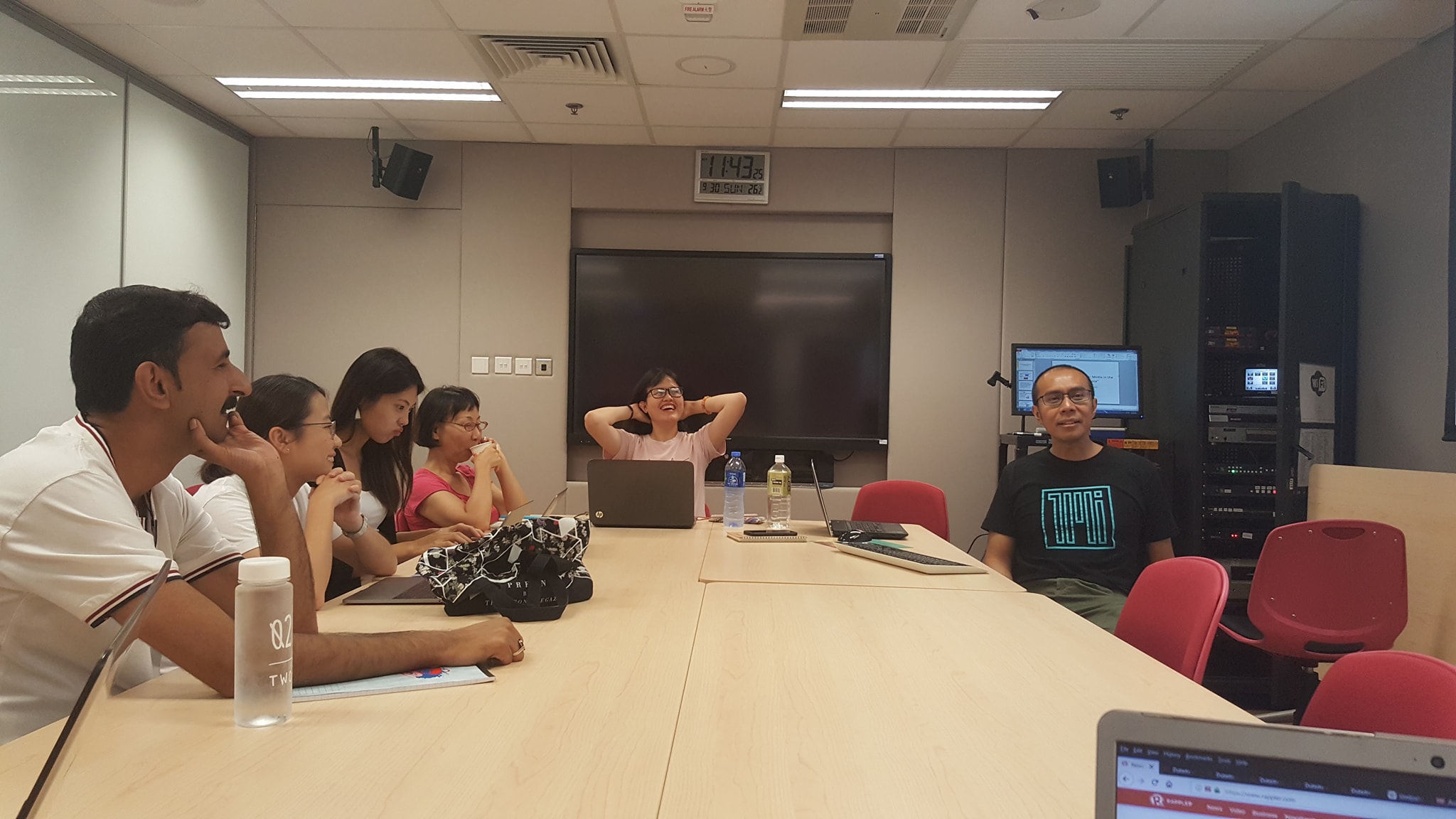 To prepare ourselves for the final presentation, all 9 of us, plus some other friends that we met would gather every Saturday from September to the first week of November to share the experiences from our countries. 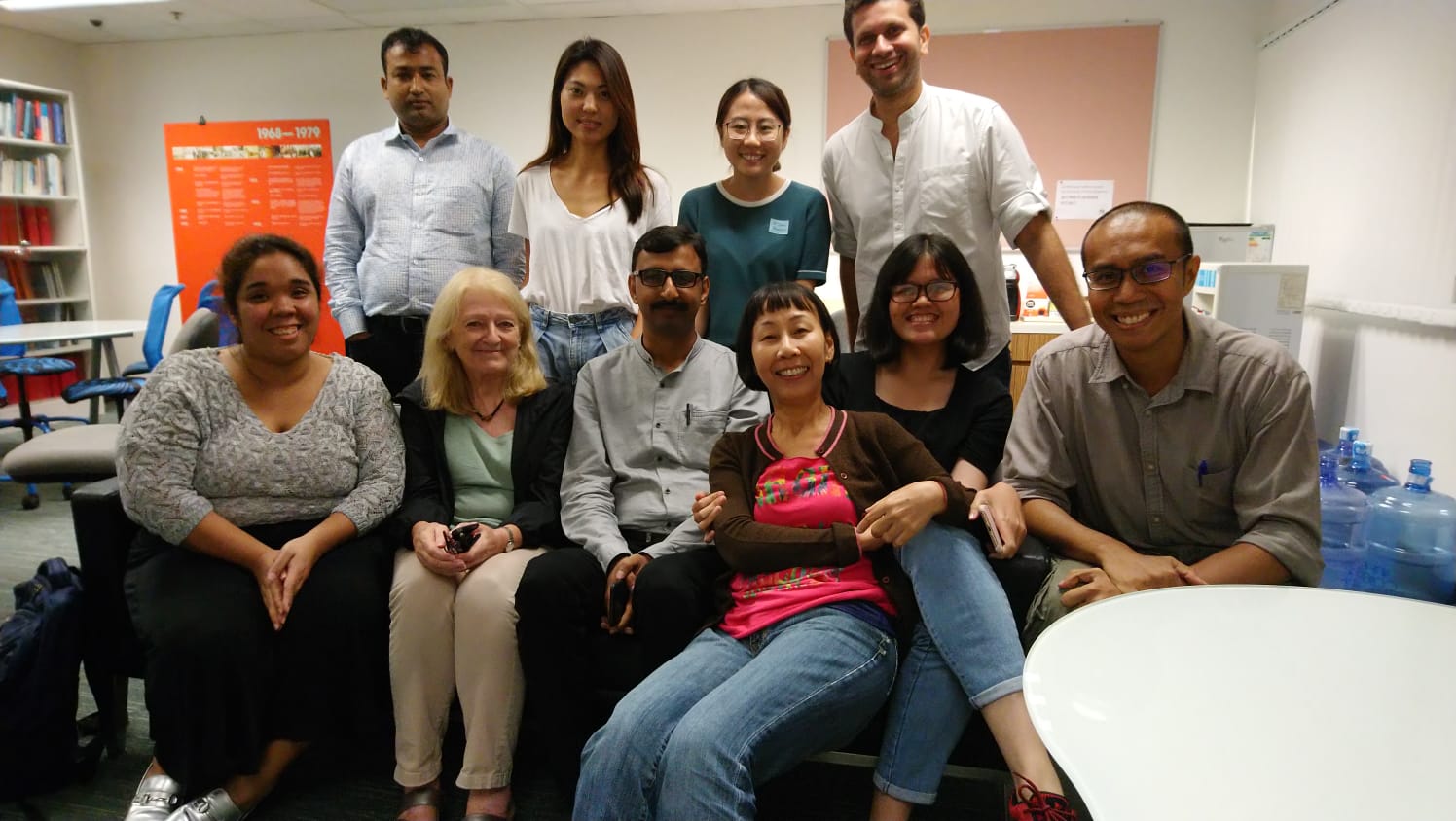 During the course of the discussions, we all realized we were all going through the same problems. Press Freedom, I told them would be a core issue to come out, but I did not expect how big it was going to be. (READ: Lessons from Pulitzer Prize winners)

I began my sharing by talking about women in media in the country and the sexist and misogynist comments we receive in our line of work. I also shared how Rappler was established and how predominantly female the employees were. 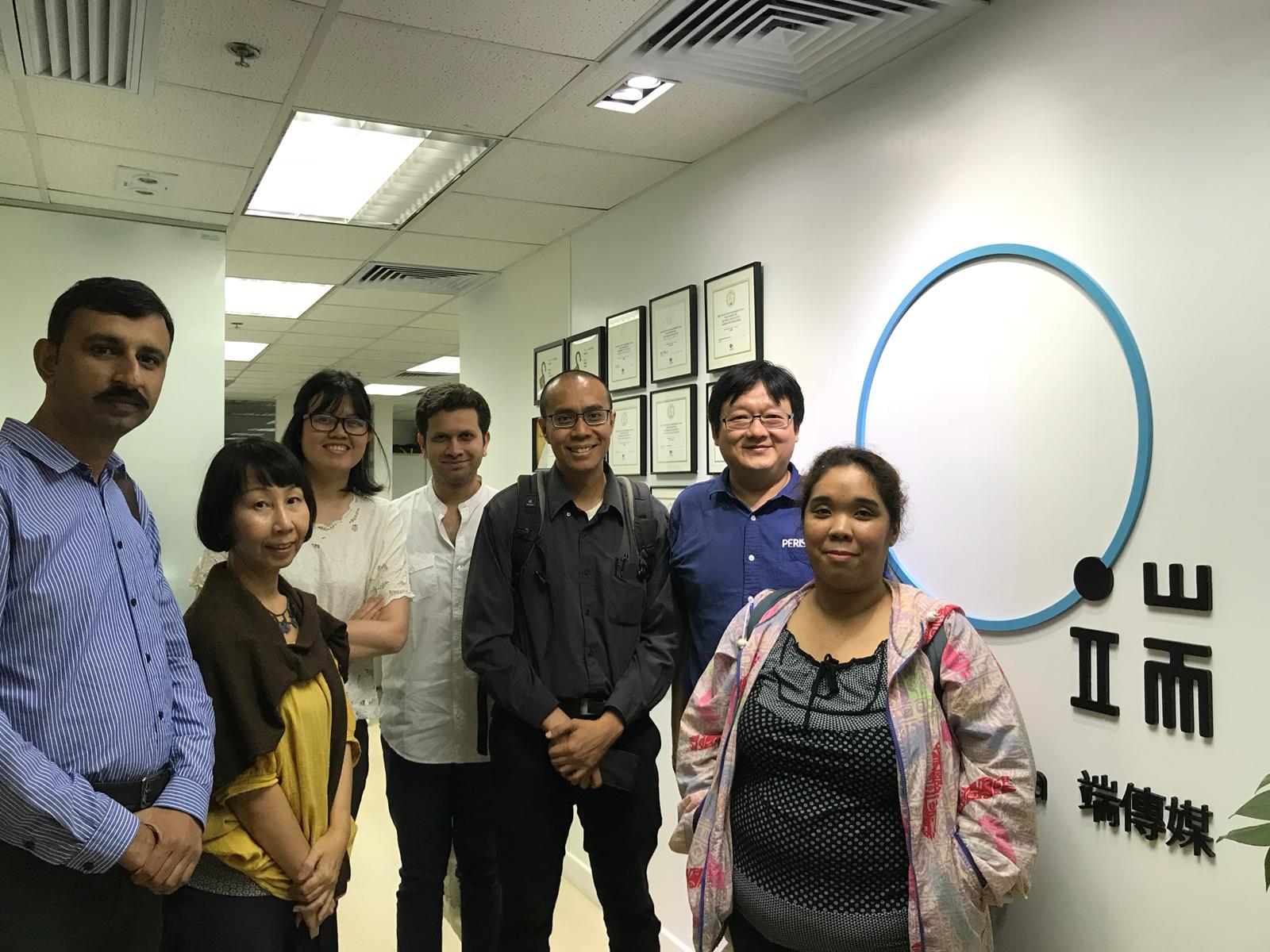 From women in media, the next round of talks would be about the situations in our countries. In an international journalism class, I was asked to talk about President Rodrigo Duterte’s war on drugs. I was able to give them some insights – the conflicting numbers given by the Philippine National Police as against the numbers by other groups and the claim that there was no such thing as extrajudicial killings.

I also talked about the infamous photo by former Philippine Daily Inquirer photographer Raffy Lerma evoking the war on drugs. That photo actually won an international prize. But of course, Duterte attacked it, saying it was a staged photo.

I also got a chance to travel to Guangzhou for two days. We visited a radio station and got to present to students at Jinan Univeristy. I chuckled at the memory when I asked them what comes to their mind about the Philippines. Someone mentioned banana. That actually surprised me. 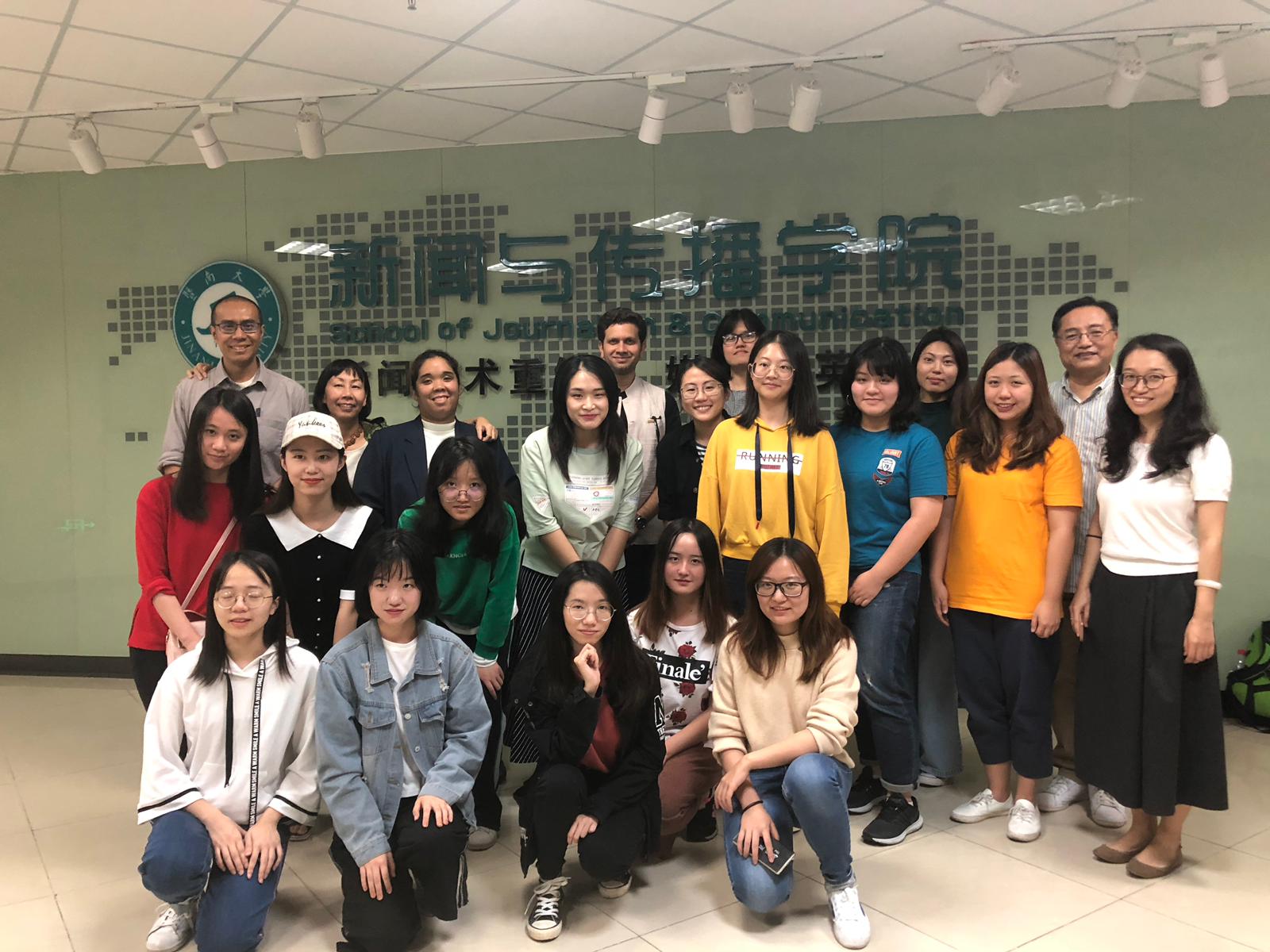 We also got the chance to go to other media organizations in Hong Kong such as Initium, Phoenix TV, New York Times, and the Hong Kong Free Press. During the meetings when I would hand out my calling card, the editors or staff would tell me how they met Maria in forums they’ve attended.

In one talk at the school, South China Morning Post CEO Gary Liu was the guest speaker and when I gave him my card, he launched into how he has also learned a lot of stuff from Maria.

What a small world indeed.

In one sharing, I decided the best way for the students to know about the Philippine media was to watch the Defend Press Freedom videos that were produced early this year at the height of the attacks against Rappler. From sharing our Palace reporter Pia Ranada’s story, I zoomed into the last video which I used twice in the presentations I did – “Be afraid, but do the job.” 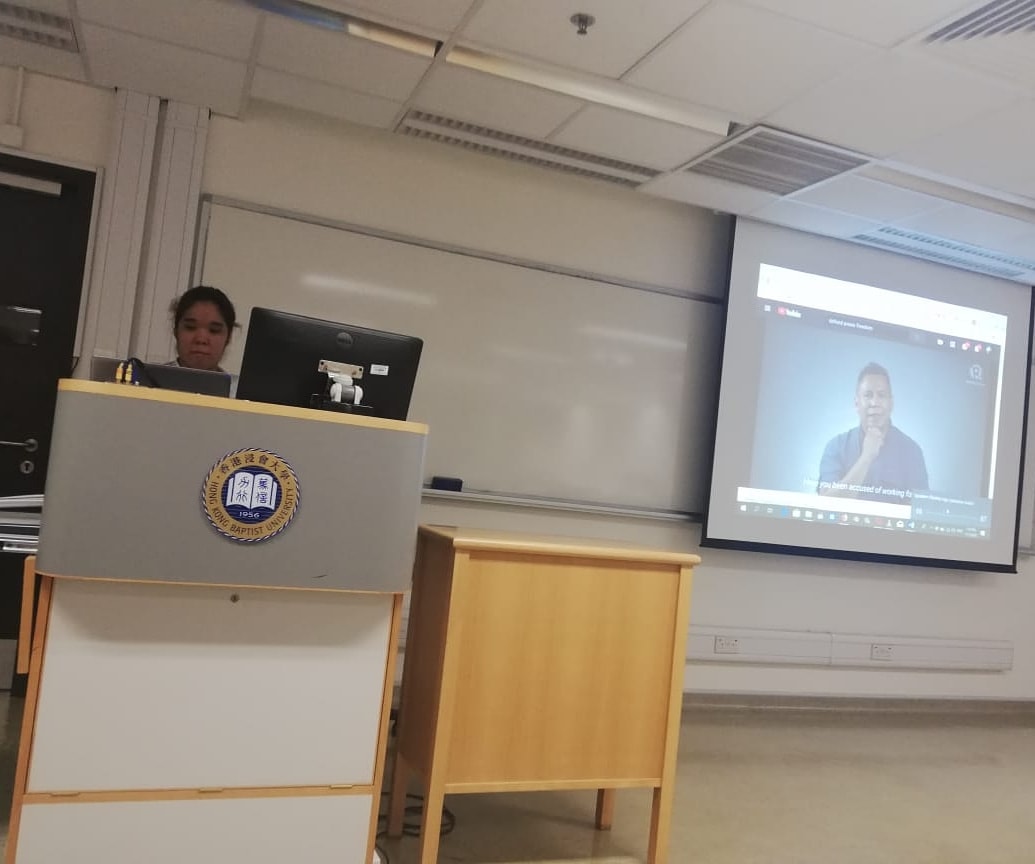 The term “Be Afraid But Do The Job” were the words uttered by veteran journalist Ed Lingao in the video. When asked if he was afraid, he said yes. But he also reminded all reporters to do the job.

Following these presentations, a student approached me if he can interview me for his paper. His name was Ken and we met one Monday afternoon to talk about everything.

Ken began to ask questions as I answered in between bites of Cantonese food at the restaurant we were in. I gave him the details I know – from the time the SEC announced they were revoking the operating license to the cases we were facing. At one point, I asked him why he was interested in our story.

He then told me about Hong Kong’s current situation. Four years after the Umbrella Movement that hit them, Hong Kong media he told me was getting a lot of pressure and censorship. Freedom of Speech, he told me, was at risk.

He said Rappler’s story was very inspiring because despite the bullying and criticism [ and the cases for that matter], we refused to back down.

I told him I appreciate his views and it does get tiring fighting and explaining the whole thing. But he said that what we were doing is a ray of hope for students like him. I simply smiled and express my gratitude. He then in turn shared his experience participating in the movement, which I also found inspiring.

These kids, I thought to myself believe in media companies like Rappler. There is still hope despite the challenges thrown at us.

In one final talk I attended, SK Witcher, New York Times Hong Kong bureau editor, talked about media ethics. C. K. Lau, HKBU professor and one of the panel members who picked us for the fellowship, asked us to give some insights about the topic. At that time, me and the journalists from Vietnam and Japan were there.

All of us then stood up one by one and gave some short insights. SK then mentioned about the indictment case against Rappler. Of course, I had to say something and I told the students that times were difficult.

“I know you are all worried about the future of journalism here, but you’re not the only one going through it,” I told them, citing the challeges the Philippines, Hong Kong, India, Bangladesh, Vietnam, and China are going through.

“Hold the line.” I found myself repeating that familiar phrase. I’ve heard it so many times, that there’s a running joke that it was a long line.

Early back in September, there was one incident back in Central when a group of Filipinos got annoyed with me for taking photos of them without permission. I never forgot that experience. They tried to make me delete the video and threatened to call the police. I deleted a photo but refused to delete the video. I simply turned my back at them. I never told them I was a journalist.

On a serious note, journalism is going through dangerous times and all of us are trying to fight back.

India is battling disinformation in a different way. Whatsapp, one of the most popular social media tools for communication, is used to spread disinformation. (READ: WhatsApp limits forwarding in India after lynchings)

Media in Bangladesh are also fighting what they call the “anti-press” digital law. Under the 2018 Digital Security Act, journalists “could be convicted of espionage for entering a government office and gathering information secretly using any electronic device – an offense that would carry a 14-year jail sentence.”

Vietnam and China, being under communist leaderships, still have a lot of limitations in the media.

Pakistan is also facing its own problems similar to what we’re going through.

Malaysia is currently going through a transition of the press. After years of being under an authoritarian regime, they have been given some free movement and trying to go through it. It’s a positive development, but it’s still being determined as to how they will use it.

As my plane departed Hong Kong International Airport, I quietly pondered what to do next with all of the lessons I’ve picked up from the fellowship. One thing is for sure, it gave me wisdom.

As for feelings of intimidation, I don’t think it will disappear. I’ve already experienced it.

One thing’s for sure: I’m breaking my silence and speaking up this time. – Rappler.com