Sweeney Todd Manila: The dark side of Lea Salonga Director Bobby Garcia calls it ‘Hot Wheels Sweeney Todd,’ and you will understand why the moment your eyes hit the stage. It’s different. Radically different from what you would expect if you have seen other Sweeney Todd productions, but the set (designed by Tony winner David Gallo) was masterfully executed and utilized to tell the story. The only thing missing? The iconic barber’s chair. 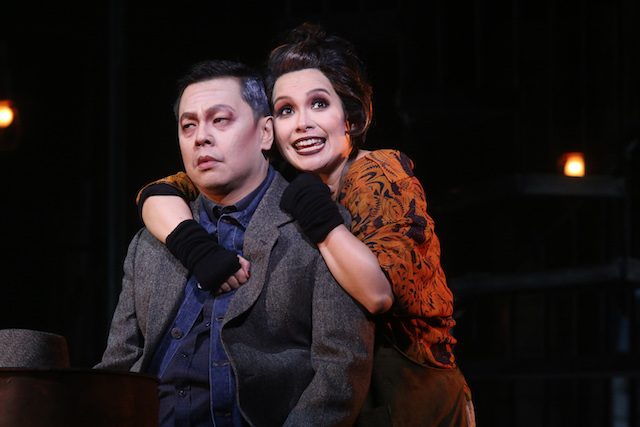 Jett Pangan’s exquisite vocals roared inside the theater the moment he started singing. I basked in the power and texture of his voice while he sang “My Friends.” I wanted to put that moment in a bottle and take it home with me. His Sweeney Todd is not as dark as I have imagined and preferred – his is this man, exhausted from life’s tragedy, searching for a semblance of peace and justice in the guise of killing fueled by revenge. (READ: Jett Pangan: ‘Nothing prepared me for Sweeney Todd’)

I was expecting greatness from Lea Salonga, but I didn’t expect to be punch-drunk from her portrayal of Mrs. Lovett. Salonga sunk her teeth into the meaty role and became Mrs. Lovett. It’s as if she packed all the goodness in her in a box, leaving nothing but her dark side for everyone to see. This role displayed her versatility and growth as an actress. It cemented the fact that her talent is limitless and that the only way for her is to keep on improving as a performer. 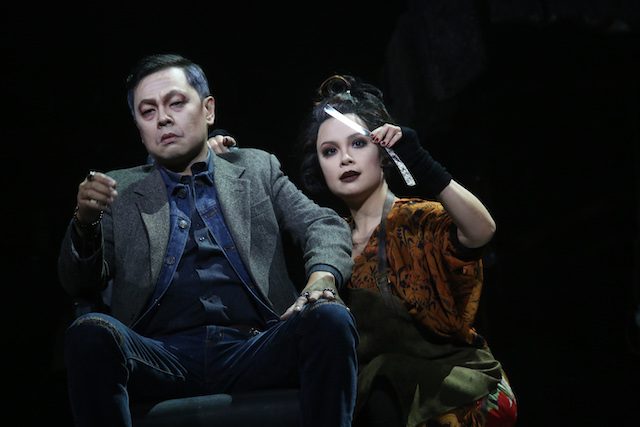 One of the surprises of the show is Gerald Santos.

Santos plays Anthony Hope, a young sailor who falls in love with Todd’s daughter Johanna. Santos brought Hope to life, embodying nothing but unadulterated kindness. He was like a light that pierced through the darkness of the show. It’s like watching the sun rise after a long night. Soundheim’s works are notoriously known for being complex and difficult, but the entire cast pulled it off it with their talent and unbelievable set of pipes. Kudos to maestro Gerard Salonga and the ABS-CBN Philharmonic Orchestra for skillfully adding an exquisite dimension to the storytelling.

From Garcia’s vision to its completion, this production has become an amalgamation of creativity, hard work, dedication, and taking risks. It’s definitely not for everyone, but I enjoyed it and I’m going back to Fleet Street for more pies.