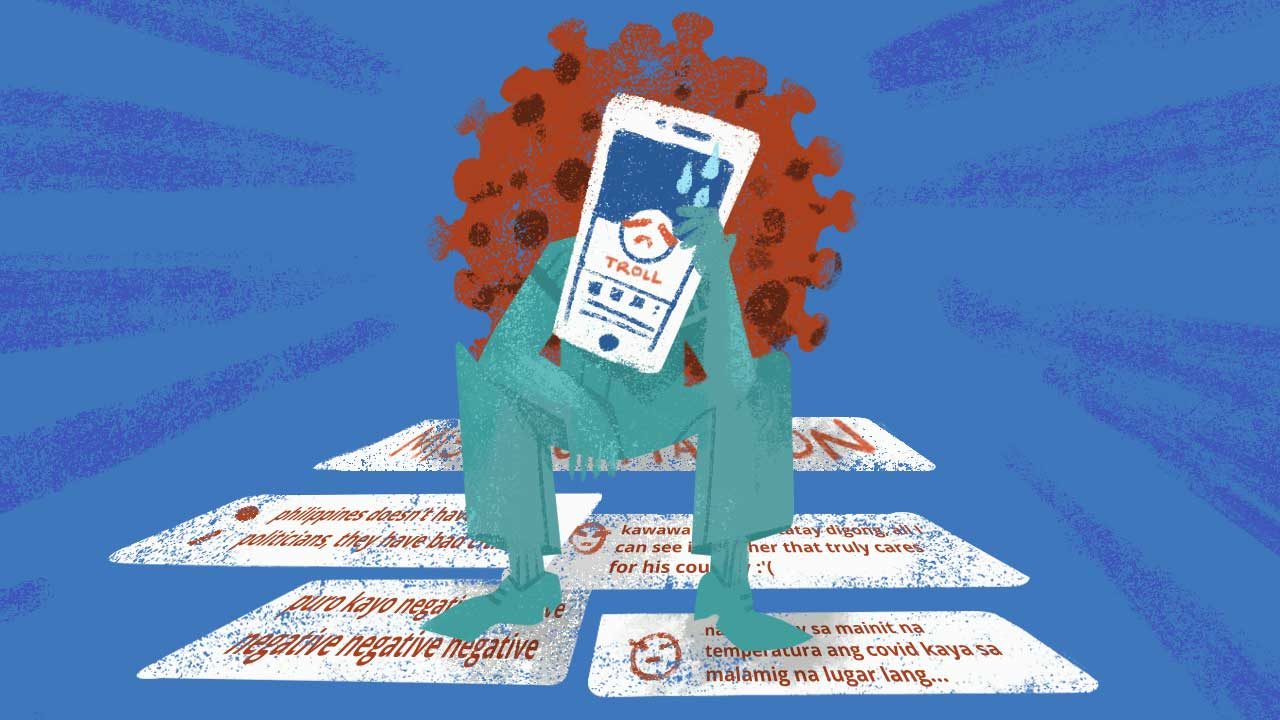 Facebook Twitter Copy URL
Copied
The very least you can feel about all of this is a huge and crushing regret, and a conviction never to take on the job of chief disinformation architect ever again

Virus-borne tidings to one and all!

Just wanted to check in on how you guys are doing, though I have a pretty good idea of what you’re going through. Let me guess…

Tired and dejected after lining up at supermarkets for 8 hours only to find most shelves gutted? Paranoid that the slightest lapse in physical distancing will lead your senior citizen parents to an overburdened emergency room – and to their death? Waking up in a cold sweat at night, the terror of whole months of possible unemployment looming over you, its nefarious cousin Hunger waiting in the shadows, claws out and fangs bared? (READ: ‘A mess’: Coronavirus economic impact on Philippines worse than projected)

That’s how most of us have been feeling. And I know that’s how you’ve been feeling too, because it’s not like your fate has ever been disentangled from ours. You are Filipino citizens too, and have always been. Whatever fate befalls us befalls you too, except that for the longest time, it was fairly easy for you to believe that your actions would never end up biting you back.

But that’s the thing: given the nature of your transgressions, of course there would be serious consequences soon enough. You play around with democracy in a country sorely in need of good leaders, and you think it’s not going to affect you in a major way? What did you think would happen? That you’d orchestrate the election of malicious power-grabbers and not be beholden to their incompetence?

For people who got paid millions for that job, your lack of foresight is embarrassing. (READ: Chief disinformation architects in the PH: Not exactly who you think)

I’ll never forget that tidbit in Cabanes and Ong’s study where one of you, when asked how she could even sleep at night given how unethical her job was, related the work to being like Game of Thrones’ Olenna Tyrell – a powerful matriarch moving the pieces around and manipulating the playing field.

Thanks partly to your decision to use your skills for disinformation, choosing to be architects of entire networks of paid liars and bullies, we now have government officials who are barely doing anything to stem this deadly pandemic. We have a President who has all but gone AWOL despite having over P200 billion to use for this crisis. We have a health secretary who finds it far more urgent to kiss ass than save lives. We have a senator inconsiderate and self-centered enough to actually walk around a hospital knowing full well that he could be COVID-positive and not admit that this was probably the dumbest, most dangerous thing anyone in public office has ever done in decades.

This hot mess – that’s not just on them. There’s blood on your hands, too. They wouldn’t be in power if it weren’t for you.

The very least you can feel about all of this is a huge and crushing regret, and a conviction never to take on the job of chief disinformation architect ever again. Hopefully, it has finally occurred to you what your fun little Game of Thrones role play can do, and that you can manage to mine out that tiny speck of dignity you have left buried within you and try to right your wrongs however way you can.

This is just a naïve hope on my end, I know, but there isn’t much else I can do from the prison of my own home.

It gets pretty maddening being stuck here, knowing this isn’t going to end anytime soon. But why am I even describing it to you? You know exactly how it feels.