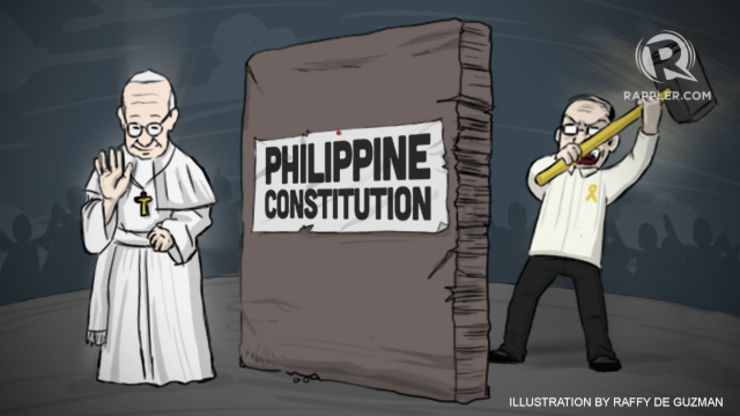 As someone who does not believe in the existence of a god, some people might assume that your visit to the Philippines would not matter very much to me. Maybe, to some, it would be just like me walking past a church on a Sunday, bearing momentary witness to the rituals and pronouncements of something I don’t believe in, and thus feeling nothing.

But as much as I do not believe in any religion’s claim to authority, I do know that a visit from the head of the Roman Catholic Church still matters immensely to me – just not in the same way it matters to quite a lot of my countrymen, who are, to put it mildly, rapturous in glee at the thought of your presence. (And I don’t blame them. I was a 9-year-old Catholic schoolgirl when John Paul II came over, and immersed as I was in rote rehearsals of “Tell the World of His Love” in the school gym day after day, I was pretty damn excited, too.)

Your visit matters to me because not since the heyday of the Reproductive Health Bill debates a couple of years ago has secularism been in so much danger in this country (and believe me, it’s violated here a lot). And that’s troubling not just for me, but for anybody, regardless of their faith or lack thereof.

Here are just some of the instances that rang alarm bells, from what I consider subtle but nonetheless disarming, to flat-out disturbing:

b)   The City of Manila and, later on, the entire National Capital Region, being placed on a days-long, school-free, non-working holiday, which will deprive citizens of precious learning/working/earning time;

c)    The President’s appointment of quite a lot of government officials (salaried, needless to say, by taxpayers) to organize every single aspect of your visit;

d)   And the one I find most damning of all, the President’s intention, in his capacity as the leader of this country, to speak with you regarding “ways to promote ‘The Kingdom of God’ during his presidency.”

I can already sense the comments threads that will spool out after this letter is published, where some readers will invoke the idea that since a majority of Filipinos are baptized Catholic, and since Catholics are supposed to hold the Pope in the highest regard, it’s safe to say that such government measures are justified, and that I should just sit quietly in a corner and behave. But this argument of theirs is an appeal to popular belief, which is a classic logical fallacy; just because most people think it’s okay doesn’t make it okay.

My country’s Constitution states that “the separation of Church and State shall be inviolable.” This means that our government is not allowed to give any one religion special attention or special funding (but, alas, in the examples I listed above, the government is violating the Constitution on overdrive). My country may have a lot of Catholic citizens, but that doesn’t make it a Catholic country. It is made up of people with differing beliefs; even baptized Catholics differ in beliefs among themselves.

Presumably, each and every person on the planet should be treated equally, regardless of gender, income, or yes, belief. You yourself, Pope Francis, are incredibly popular for your more progressive pronouncements about, for instance, the LGBT. That’s your “hook,” your “selling point”– that you’re trying to dust off the cobwebby, crotchety notions of faith from your vestments, never mind that toppling the Goliath that is the Catholic Church-as-centuries-old-institution-with-tons-of-money is, well, mind-numbingly difficult. So, given all that, you should be able to see the predicament your visit is causing. The scales are tipping – toppling towards – one specific side.

The violation of secularism is no different from sexism, or racism, or classism. It is favoring one group of people over others. And just like all these other –isms, even the subtlest acts can lead to painful consequences. I would imagine that you are aware of the concept of structural violence, in which the very way a place is run is already harming certain people, placing them at a disadvantage. I already live in a country where 800-1000 women die each year because of unsafe abortions; where the LGBT are killed for being who they are; and where people are trapped in abusive, nightmarish marriages for the rest of their lives.

We should want to make things better, but first, we have to keep things from getting even worse, and it’s the government’s bias towards Catholic ideas against contraceptives, a wider scope for sexuality, or divorce, among others, that’s making things worse.

Yes, technically, I understand that you’re just doing your job. To complicate things further, you’re also head of the Vatican as a sovereign city-state, which means that you’re technically also coming in as a diplomat. (I naturally have qualms about this Vatican city-state issue but let’s reserve that doozey for another letter.)

Because of this, our government can easily invoke your diplomat status to defend itself from being accused of violating secularism. It can claim that it’s just treating you the same way it would treat, say, Obama. But judging from the time Obama came here in early 2014, I can categorically say that all the fuss over him pales in comparison to the preps being made for you. And, well, let’s face it: I don’t think anybody who sees you when you arrive will be thinking, “Oh hey, it’s Diplomat Bergoglio, come to strengthen inter-state ties.” What people will see is a man who eats, sleeps, and breathes religion; a man of faith; a man who walks around with the word “holy” hovering, glinting, over his head, and that is the man our supposedly secular government is bending over backwards to accommodate.

So, all that being said, if you truly want to champion the rights of every person on this planet, regardless of who they are, then call my government out for their callous violation of our Constitution. You present yourself as a simple man who wants to rid his position of its jarring pomp and circumstance. You yourself stated that you shouldn’t be the focus of your visit. Please tell that to my government, which is tripping over itself to aggrandize you using taxpayer’s money. It’s the least you can do given the centuries of oppression (and ongoing injustices) done here in the name of your faith.

I’m not speaking on behalf of all atheists in this country. No two atheists are alike, the same way no two Catholics are alike. But what I do know for sure is that all of us, no matter who we are, deserve to be treated equally and humanely. That is what I believe in.