What I don’t understand about Pope Francis 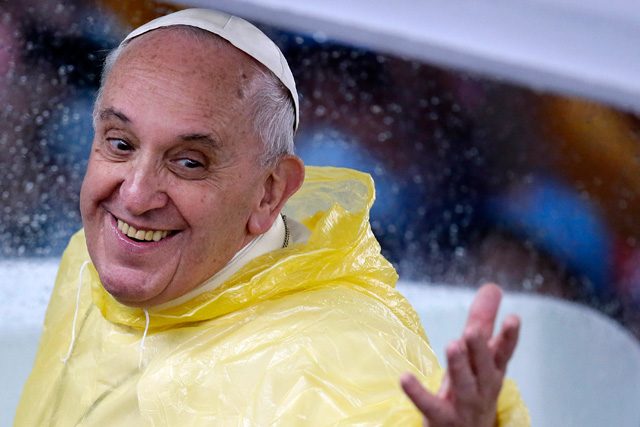 Facebook Twitter Copy URL
Copied
I cannot quite comprehend why people would wait for hours under the scorching heat or rain to see the Pope. But to borrow a quote from Pope Francis, 'Who am I to judge?'

There were no tears, goosebumps, even illusions of being awestruck when I first laid eyes on Pope Francis, Vicar of Jesus Christ, and leader to millions of Roman Catholics.

As I was perched on the center island along Roxas Boulevard corner Quirino Avenue, the 78-year-old Argentinian pontiff to me, was like any other principal I was tasked to cover.

If anything, my eyes were fixed not on the man in clean, crisp white robes but on the men in suits preceding and trailing him, their eyes darting from one spot to another along the dark boulevard, watching out for anyone who might try to do something stupid. (READ: Agenda: Securing Pope Francis)

You see, I, Bea Cupin, cannot and will not claim to be a good Catholic.

For that matter, I cannot claim to be a good person.

When I was younger, I prayed the rosary, the Angelus, said “Angel of God, my guardian dear” fervently every night, and attended Sunday Mass with my family like all good Catholic girls do.

Somewhere along the way, cynicism and life happened and I found myself going to Mass less and less, praying (at least, in the Catholic sense) even less, and foregoing the sign of the cross altogether.

Pope Francis, Jorge Mario Bergoglio before he was elected Bishop of Rome, was an ordinary old man with kind eyes and an energetic smile. He’s a wonder to catch on camera.

But I could not deny – neither did I want to dismiss the cheers, shouts and excitement wherever he went during his 5-day stay in the Philippines – the crowd at Roxas Boulevard corner Quirino Avenue on the day Pope Francis arrived was infectious (almost).

They would clap and cheer every time they heard something vaguely related to the Pope’s arrival. Even the “one, two, three” counts of the choreographer over the PA system at the Villamor Air Base sent them into a frenzy.

Once the Pope’s convoy left, turning right at Quirino and heading straight to the Apostolic Nunciature, the crowd quickly dissipated. And since I was stuck there (a crowd of hundreds takes time to dissipate, obviously), I was forced to try to understand what just happened.

Why were people crying? Why were they so happy? What is this that we in the Philippines spent sleepless nights over? But I got a text message from my editor and pushed those questions aside.

There was an article waiting to be written (#journlyf and all, you see).

I have always been skeptical about religion, especially the one I was born into. I have the Jesuits to thank for that, I suppose. It was during my college years that I realized I could, and even preferred to draw my energy and hope from something other than religion.

The irony that this pope is the first Jesuit pope is not lost on me. It was weird when Bergoglio emerged from the Papal balcony, with that shy smile of his and awkward wave.

After the breaking news high went away (it’s the best kind of high, you should try it) came another wave of excitement.

The new pope was a Jesuit! A “kind looking” one, for that matter. (I’ll always have a bias for the Society of Jesus. In many ways, I’m the adult I am now thanks to Jesuit brainwashing…I mean, education. But that’s another matter altogether.)

Crowd at Luneta 4 hrs before mass led by @pontifex is supposed to start #showthepope pic.twitter.com/inmWC1Mn8e

I cannot quite comprehend why people would wait for hours under the hot Philippine sun or endure typhoon rains just to catch a glimpse (literally, a glimpse) of this man because, well, he is a man.

Then again, he just so happens to be the leader of a centuries-old church.

There were times during his trip when it was painfully clear he was exhausted, but the man has an uncanny ability to push that exhaustion aside in an instant. Local church leaders and his spokesmen say he draws that energy from the Filipino crowd.

I cannot claim to be a huge fan of the Pope but I don’t hate him either. I understand, but I am also quite dismayed by the Church’s unchanged stance on homosexuality, divorce, and “irregular” families. Don’t get me started on contraception.

But I am thankful enough for what the Pope brings to the country: hope and inspiration through his compassion.

Although, like I said, I don’t understand why people are more than willing to compromise their comfort and sometimes, safety, just to see the Pope, I understand the effect he has.

A language that I get is that of inspiration. It may have been the lack of sleep or me just being carried away, but for the first time, I did the sign of the cross on my own volition because Pope Francis told the crowd in the Mall of Asia Arena: “Let us pray.” Several times, I teared up when the Pope approached the sick, especially little Brandon. I laughed when I saw his attempt at “learning” sign language on-stage.

I laughed even harder when he urged couples not to forget the “illusion” they had when they were boyfriend and girlfriend and aww-ed just a little when he apologized for his poor English.

I shed more tears that I would like to admit when I saw videos and photos from his trip to Leyte.

Being in the province weeks following Typhoon Yolanda (Haiyan) 2013 gave me a good (albeit limited) understanding of what his visit meant to the survivors, many of whom lost everything to the deadly typhoon.

It is not the center of mine but that doesn’t make me less of a good person; nor does it make those who do not put religion at the center, naive.

It’s easy to dismiss the millions who clamored to see the Pope as a crazed flock, religious fanatics with a shallow understanding of their faith. It is easy but it is also unfair – not only to the people being judged, but to the judger.

I don’t know the stories of the people who attended the Pope’s many gatherings in the country. I don’t know what motivates them, I wouldn’t know if something in the past touched them so profoundly that they were willing to sacrifice just to see the leader of their Church.

(But let it be known that I am deeply bothered by people who insisted on bringing infants and small children to the Luneta Mass. The conditions were hard to bear, even for a full-grown, generally healthy adult.)

For the most part of his 5-day visit, my eyes were always fixed elsewhere: the crowd, the police trying to control the crowd, and the daily security briefings with government officials.

To borrow a quote taken from Pope Francis, “Who am I to judge?” – Rappler.com