Feb 21, 2015 4:43 PM PHT
Miriam Grace A. Go
Facebook Twitter Copy URL
Copied
The mayor of Mindanao’s largest city is testing the waters for the presidential polls. If ever, he would chip off Binay's support base: local governments 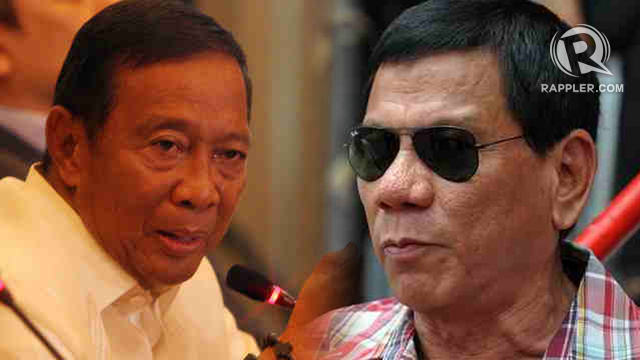 It’s been quite obvious, from the first federalism forum in Butuan City graced by Rudy Duterte, that the mayor of Davao City is gauging whether a possible presidential bid would gain ground.

The idea of him seeking the highest post had been floated before that. Federalism is an advocacy that resonates with the two of the country’s 3 major island groups – the Visayas and Mindanao – home to 33.47 million registered voters as of 2013.

The information caravan has reached Luzon, however, and it’s made clearer another aspect of a prospective Duterte campaign: it may threaten what most of us thought would be Vice President Jojo Binay’s solid hold on the local government sector as a vote base.

The former mayor who is constrained to make controversial statements because he is vice president now, versus the tough-talking mayor who doesn’t lose anything if he says now that he’d put in place a revolutionary government if, under his presidency, the reforms don’t materialize in 6 to 12 months.

The former human rights lawyer, who is reputation-bound to say let’s uphold the rule of law, versus the local chief executive who strikes a chord with citizens even outside Davao with his very “practical” approach to addressing criminality. (Hands down favorite of late would be him instructing security personnel to shoot looters who would try to hijack a convoy of aide givers on their way to Leyte after Super Typhoon Yolanda.)

A former mayor whose governance has been marked by allegations of bigtime corruption versus a mayor whose been called out for alleged human rights violations against crime suspects. Tell me which sin most voters would consider worse.

Clearly, the Pimentels of PDP-Laban saw the potential – of Duterte’s bid, and of using Duterte’s bid to get back at Binay. As I write this, the party has sent an advisory to newsrooms that Duterte would be a guest speaker at its 33rd anniversary celebration late Saturday afternoon, February 21, in Intramuros, Manila.

It wouldn’t look contrived. Former senator Nene Pimentel is the father of the current Local Government Code, which devolved a lot of powers to local governments – a good first step for any country contemplating a shift to federalism. Their family, like Duterte, is from Mindanao, and it is there where PDP-Laban is reportedly trying to regroup.

Until the last election in 2013, Binay chaired PDP-Laban, the small party that helped form the United Nationalist Alliance that became the vehicle for his successful vice presidential bid in 2010. But he resigned after disagreements with Senator Koko Pimentel, who was offended when UNA adopted as senatorial candidate in 2013 Migz Zubiri, who had cheated him out of the senatorial polls in 2010. The younger Pimentel now chairs the party.

Binay won on the idea of Makati being a successfully-run city by making the most of local autonomy, and promising to replicate it nationwide. With the spectre now of a Mindanaoan who has also run a city considerably well, voters may start to question how valid Binay’s campaign line was: of course, Makati could deliver services galore, the biggest companies in the country pay their taxes there.

In contrast, many of the provinces and cities, especially outside Luzon, have either progressed largely through local government efforts or have remained in poverty due to imperial Manila’s neglect – not through effortless, almost automatic, huge tax collections. With them, a prospective candidate like Mayor Duterte can’t go wrong with floating the idea of a system that gives regional governments extensive freedom to keep and manage their own resources and run their own affairs.

It will be simplistic to pit Luzon’s 29.27 million voter population going for Binay against Mindanao’s 22.73 million going for Duterte. (And there’s the question of with whom the Visayas’ 10.74 million will side.)

But then it also doesn’t work to rely on the history of Binay topping the polls in 20 Mindanao and Visayas provinces in 2010. He didn’t have a true blue Mindanaoan as rival at the time. In fact, at the kickoff of Duterte’s “listening tour” disguised as a series of federalism forums, he was joined by Vice Governor Manny Piñol of North Cotabato, one of the provinces that delivered for Binay in 2010.

Is Duterte worth watching? Yes. I’d like to think he’s not out to just increase his name recall for a senatorial run – he’s been uncomfortable with legislative work (he couldn’t wait for that single term as congressman to end, 1998-2001, while waiting for the term ban on the mayoral post to pass). At the very least, he may be positioning himself for a vice presidential bid – which was the path that Binay took going into 2010.

Whether Duterte’s Mindanao (and Visayas) ties will translate to votes and prevail against Binay’s 2010 machinery of sister cities, APO fraternity, and the Boy Scouts is another story. We will see in the next several months. For now, the idea is undeniably a welcome tease. – Rappler.com