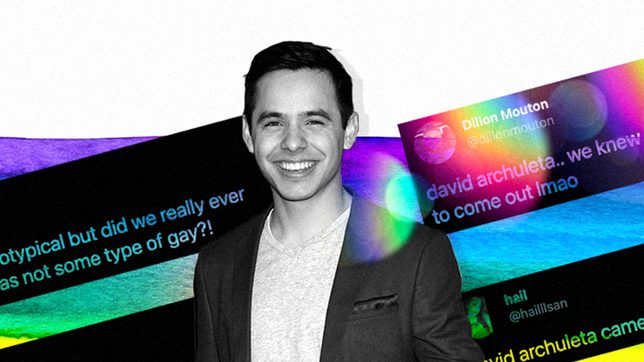 Facebook Twitter Copy URL
Copied
'When a member of the LGBTQ+ community needs to say something, you don’t say it for them. You let them say it. And you listen.'

I’m straight. I identify as heterosexual, and I’m cisgender, too. I’m just a regular girl who turns into the cheesiest, most disgusting hopeless romantic whenever I catch myself getting feelings for a boy. It’s even become a running joke among my closest friends – a lot of whom are part of the LGBTQ+ community – that I’m a very fierce Kinsey scale zero.

Another thing all of my friends know is that I’ve been a David Archuleta stan since he made his big break on American Idol. I was 10 years old when I first saw him grace the TV screen, and I’ve loved him for 13 long years. I’ve seen him perform live on different occasions, I got my copy of his memoir signed when I met him, and I even remember taking my copy of his debut album with me everywhere I went.

David recently came out on social media, and it was the first thing I saw when I woke up last Sunday morning. My happiness was immeasurable – it was the only thing I talked about all day, and I was overjoyed he mustered up the courage to publicly reveal such a personal thing, especially considering his religious background.

David Archuleta comes out as member of LGBTQ+ community

But apart from being happy for him, I was also very frustrated reading the comments on different articles about his coming out story. Bigots would say something along the lines of “We knew all this time,” or that the news wasn’t surprising to them because it was an “open secret.”

I don’t know what it’s like to come out, and I probably never will. (I know that sexual attraction can change over time, so I can’t say for sure.) But so far, I’ve never experienced that for myself, the inherent fear that comes with the act. The fear of how people will respond. The fear of others treating you differently. The fear of your loved ones possibly refusing to accept you for your sexuality or gender identity.

But from what I’ve seen on social media and through the experiences of my friends, I do know that coming out is a very personal act – a brave one at that, because it means you were strong enough to fully live your truth, to take control of your narrative, to decide who you were going to be from now on. That’s what annoyed me so much about many of the comments online. They made his coming out story about themselves.

And even if you choose not to come out, or at least take your time to do so, that’s something people need to learn to respect, too. People are allowed to announce whatever they want, whenever they want. I didn’t realize there was a deadline for someone to come out – are people supposed to make public announcements as soon as your “gaydar” starts acting up? What value do you add to the discussion when you say you knew about someone’s sexual orientation before they opened up about it? Congrats, do you want a prize?

This is not to say I’m the perfect LGBTQ+ ally. I’m still learning, that’s for sure. I have to teach myself to be mindful when I talk about my friends’ same-sex relationships when their parents don’t know. I have to get used to my friends’ preferred pronouns, which I admit can get difficult for me when I’ve spent years with them pre-transition. As someone who works for Rappler’s social media team, I have to be very careful about the LGBTQ+ posts we put out there, so that we don’t put anyone in harm’s way. And I sure as hell am not going to say you’re automatically an LGBTQ+ ally if you have queer friends. You can have queer friends and still say demeaning, dehumanizing, invalidating things about the LGBTQ+ community. Over the years, I’ve learned the best thing you can do as an ally is to shut up.

I don’t even mean this in a “if you can’t say something nice, don’t say anything at all” way. Some cishet people mean well, but end up talking over members of the LGBTQ+ community. Let’s get things straight (pun intended, thank you very much) – the LGBTQ+ community doesn’t need a spokesperson. They can speak for themselves.

In an age where virtue signaling has become a pandemic of its own, it’s tempting to spew out statements to show everyone how much you care (or seem to care) about LGBTQ+ rights. It’s tempting to social-justice-warrior your way into telling the world they need to see queer people as humans. I think what gets lost in today’s notion of activism is that speaking on behalf of others can do more harm than good.

Respect over acceptance: On coming out as LGBTQ+ I’ve learned the best thing you can do as an ally is to not take up spaces that aren’t meant for you. The LGBTQ+ community made that space for themselves, and they deserve to enjoy that after being overshadowed by cishet individuals for decades. I don’t want to talk about myself when it comes to these issues, because there are more important voices that need to be heard. I’ve learned to stay silent when it’s not my place to speak. When a member of the LGBTQ+ community needs to say something, you don’t say it for them. You let them say it. And you listen.

Every Pride, queer people protest against widespread prejudice and celebrate their true selves, and it makes my heart swell. I know this isn’t a battle the LGBTQ+ community can fight on their own, but I’ve always supported them from the sidelines. I know that Pride Month isn’t for me. It’s for my Twitter mutual who told his parents he was gay and they accepted him just the same. It’s for my longtime friend who got his first binder and now feels more comfortable in his body. It’s for all my schoolmates who are still in the closet and can only be who they really are in online spaces, away from judgmental relatives. And I love them all with every fiber of my being.

To my fellow cishet individuals, we’ve got so many of our own personal moments to be proud of. Let’s let the LGBTQ+ community have theirs. – Rappler.com