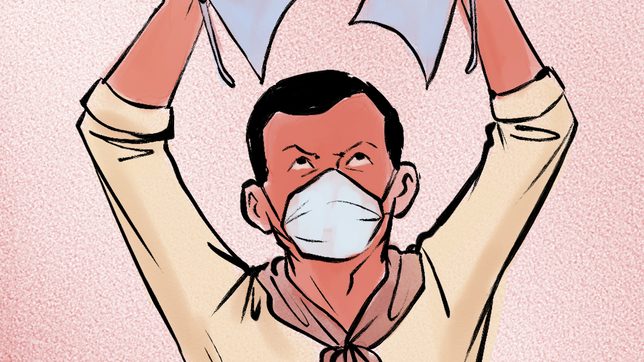 Facebook Twitter Copy URL
Copied
'You are not here to keep us from harm. You are here to make a bunch of heartless men rich.'

When you were first made mandatory, I hated the idea. I wanted so badly to contest it. You made it hard to see, to speak, to breathe. The air became warm and stifling the second I put you on. In fact, since I wore glasses, even putting you on was a chore. I can’t count the number of times I’d already be out of the house and realize I’d left you behind. It felt absurd and humiliating having to run back and get you, knowing full well every other nation on the planet didn’t think you were necessary. I think I speak for every Filipino when I say you are an infuriating inconvenience.

But I did my best to suppress my distaste. At the time, the virus was laying waste to so many people around me, and a vaccine remained a pipe dream. To rail against you seemed blasphemous; I didn’t want to come off like one of those whiny anti-maskers in the US who valued their own personal comfort over the health of the general public.

Yes, the World Health Organization made it clear that you were only good for COVID-19 as eye protection, and only in conjunction with medical masks, but some friends reasoned that every tiny bit of protection could help – and the country clearly needed all the help it could get. This reasoning also put a spotlight on my privilege; I was healthy and employed while so many were not, and making a big stink about you seemed insensitive; tone-deaf. So as much as I wanted to give a loud, rambling speech about health security theater to every security guard who told me to put my shield on, I succumbed to that itty-bitty percentage that you weren’t so bad and tried to go on with my life.

But then Pharmally happened.

Apparently, you were instrumental in what appeared to be the siphoning of billions in taxpayers’ money. Yes, the case was specifically about the versions of you ordered for our public health workers, but let’s not kid ourselves: Your presence as consumer goods – as a Shopee purchase, as shelf stock at 7-11, as a roadside buy on the steps of the MRT – is insidiously intertwined with that government deal.

And so, as much as this exposé on corruption upset me, it also suddenly gave me full permission to declare my hatred for you in public, with gusto. Yang, Lao, Duque, Duterte, and every other slimebag in between – their smug deflections gave me all the validation I needed. It was clear: You are not here to keep us from harm. You are here to make a bunch of heartless men rich. No amount of measly eye protection can make up for the fact that you are the physical embodiment of this country’s rotten system. The metaphor you create is both apt and unfortunate: The corruption is literally right there, right in front of us, a literal inch from our faces, and still we endure it. That gives me every right to be mad at you, and to tell everybody about it.

But being vindicated in my hate for you is not much consolation now. A year since you were forced upon us, the virus is still laying waste to many, and while vaccines are no longer a pipe dream, they only come into this country in pathetic little trickles. The heartlessness of men continues to prevail, so whatever relief we thought we would have by now hasn’t come and won’t be coming soon. At this point, there are clearly worse things for Filipinos to be furious about.

But I carry with me a sliver of hope, though slim.

I write this on the second day of the filing of certificates of candidacy for the 2022 elections – the day of the M. Night Shyamalan twist of Bong Go running for VP and Duterte retiring from politics (at least for the next few weeks). Political machinations are full steam ahead, and it looks like it’s going to be yet another tortuous road to that one day in May.

Chances are, you’ll still be part of the protocol then, stifling people already suffering in the summer heat, making the long line into their precinct seem 10 times longer. I hope, as these people finally get to hunch over their ballots, pen in hand, sweating and squinting behind their flimsy prison of plastic, that they are so pissed off with you and your bullshit that they vote all of the right people in. – Rappler.com