APEC: Special lanes for whom?

Nov 14, 2015 10:47 PM PHT
Facebook Twitter Copy URL
Copied
There was a time before APEC and before the era of globalization, that people's lives got better, even if slowly and sometimes haltingly, and economic policy was not so methodical in supporting corporate profits and swelling oligarchic wealth It isn’t really just about the special traffic lanes or even the reorganizing of the life of the nation’s capital for a few days because of the Asia-Pacific Economic Cooperation (APEC) summit.

Although they do make visible the real problem with APEC – it’s an exclusive organization that for the last 26 years has been promoting the most exclusionary economic policies the world has ever seen. The people of the Asia Pacific region, including the Philippines, are the worse off for this.

The clearing of Metro Manila’s streets around the time of the APEC summit is a minor feat of social engineering. The government declared a 4-day holiday, asked those with money to spare to go out of town on vacation, obliged those on “no work, no pay” schemes to stay home, and removed homeless and others apparently deemed unsightly.

The reorganization of entire economies through free market policies of the kind APEC has promoted since its inception, on the other hand, is a massive feat of social engineering. Decades of countless globalization-oriented international trade deals, domestic economic laws and policies, and business practices have shaped industries, commerce, public utilities, social services, governance, and even the way people think and interact with each other.

The problem is that APEC is very much an elite club. The highest ranking heads of state or otherwise economic leaders that give APEC its unique political prominence in the region very much come from elite political classes. APEC institutionalized how these political elites work with economic elites. Chief executive officers (CEOs) and the business elite do not just hobnob with officials during the annual summits but are an essential part of the APEC organizational structure and are involved in its work program throughout the year.

This is in stark contrast to how the farmers, fisherfolk, workers, vendors, small-scale traders, and others in the informal sector who compose the majority of citizens in APEC member countries are conspicuously absent in APEC processes. If anything, as we will doubtless see during the APEC year-capping summit itself on Roxas Boulevard, they will be forcibly kept as far away and as out of sight of APEC leaders as possible. 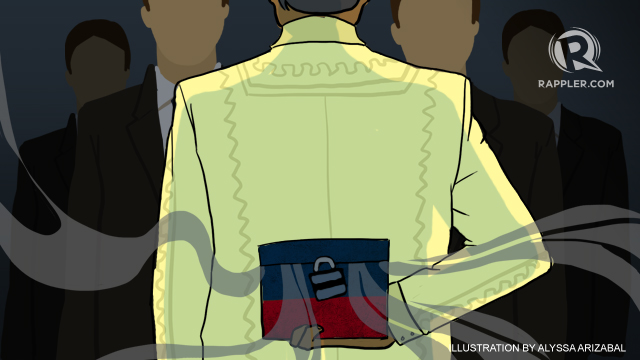 APEC’s considerable economic work is consistent with its character as an elite club. APEC was created in post-Cold War 1989 to give even greater momentum to the neoliberal free market economic policy offensive which picked up as the Berlin Wall and the Soviet bloc came down. But so-called free market policies have never been democratic and have ever since benefited primarily those who have the economic power to dominate markets to begin with. In the current world economic order they particularly benefit the biggest capitalist powers US, Europe, Japan, and of course the newest challenger, China.

APEC’s first-ever Joint Ministerial Statement on its creation talked about advancing “global trade liberalization” and “regional cooperation” and supporting the Uruguay Round talks of the General Agreement on Tariffs and Trade (GATT). The United States (US) convened the first APEC leaders’ summit in 1993. While the leaders’ declaration loftily declared the vision of “prosperity for people” it also gave the critical final high-level political push for the conclusion of the Uruguay Round and the creation of the World Trade Organization (WTO) in 1994.

The leaders’ declaration from the last APEC summit in the Philippines in 1996 reflected the globalization hype of the time. It “reaffirmed the primacy of an open, multilateral trading system based on the WTO” and “launched the implementation phase of [the] free and open trade and investment agenda”. It also formed the APEC Business Advisory Council (ABAC) as a key, high-level body in APEC to “[engage] the business sector as a full partner in the APEC process”. This institutionalized the belief in the benefits of the invisible hand and profit-seeking.

Amid criticisms from the mainstream Philippine Left, which launched the People’s Campaign Against Imperialist Globalization (PCAIG), including a kilometers-long protest caravan to the summit site in Subic, the 1996 leaders’ declaration from the Philippines “affirmed [the] commitment to sustainable growth and equitable development” and boldly expressed “full confidence that the APEC process will produce substantial, concrete, measurable and sustainable results which will tangibly improve the lives of all our citizens by the turn of the century.”

Globalization, free trade, and investment liberalization have since moved forward in the Asia-Pacific on the back, not just of the high-level summit, but also hundreds of APEC technical committees, working groups and task force meetings annually. These support and complement the binding deals made at the multilateral WTO, as well as in regional and bilateral free trade agreements (FTAs). They also influence market-based policies implemented through domestic legislation and economic programs.

Today, 19 years later, the criticisms from the mainstream Left in 1996 have proved prescient. Notwithstanding considerable growth hype and prosperity for a very few, the majority of Filipino people and the national economy are actually much worse off than before.

The Aquino administration has made much of rapid economic growth under its watch. The 6.3% average annual gross domestic product (GDP) growth over the period 2010-2014 is certainly markedly faster than the 3.5% rate in 1992-1996. As might be expected upon opening up the economy, trade and foreign investment have also increased since the 1990s.

However all this growth, foreign trade and FDI have not produced real development. For instance, producing goods using available natural and human resources is critical for national development and needs to be given priority over being a merely service economy. But the Philippine has fared very poorly here over the last decades of globalization. We are now more of a low value-added service and trading economy than a producing economy.

The agricultural sector has shrunk since the last APEC summit in the Philippines 19 years ago. Its share in the economy has fallen from 21.1% of GDP in 1996 to 10% in 2014 and its share in total employment has also fallen from 42.8% to 26.9% over that same period. Some 1.4 million agricultural jobs have been lost since 1996.

The shrinking of the country’s most important job-creating sectors explains why the number of unemployed and underemployed Filipinos has kept growing since the last APEC summit in the Philippines. The economy today is only creating half the number of jobs it did 19 years ago – the 766,967 jobs created in 2014 is almost exactly half the 1.5 million jobs created in 1996. IBON estimates of 12.2 million unemployed (4.3 million) and underemployed (7.9 million) Filipinos in 2014 is 3.9 million more than during the last APEC summit in the Philippines in 1996.

This is the worst jobs crisis in the country’s history and drives increasing numbers of Filipinos overseas. The number of Filipinos still forced to find work abroad every day has tripled. The 1,809 overseas Filipino workers leaving every day in 1997 increased 278% to 5,021 daily in 2014. To put this figure in perspective, this number of Filipinos deployed last year is nearly double the only 2,800 jobs created domestically per day. The number of overseas Filipinos increased by 3.3 million, from 7 million in 1997 to 10.2 million in 2013.

But these are not even all that the market forces unleashed by globalization have wrought. Real wages are stagnant and work made contractual for the sake of “competitiveness”; farmers without market power are kept landless by market-based land reform; agricultural land has been converted to more profitable commercial, residential and industrial use; water, power and rail transport rates are driven inexorably upward; schooling and health are becoming unduly expensive, and more.

There is also no doubt where the benefits of growth, foreign trade and FDI have mainly gone. The net income of the country’s top 1,000 corporations, including foreign transnational corporations and domestic oligarchs’ conglomerates, increased four-fold from P251 billion in 1996 to P1 trillion in 2013. This corporate bloat underpins the staggering record wealth of the richest 25 Filipinos at $65.4 billion in 2015 – which is equivalent to what the poorest 76 million Filipinos would earn and struggle to live on in an entire year.

More than a few of the 25 richest Filipinos will probably be attending the summit, while any from the poorest will be kept at bay at the boundaries of the security zone or, at best, working for an honest day’s low wage inside.

All this of course makes the “Building Inclusive Economies, Building a Better World” theme of the Philippine hosting even more ironic. The sub-themes of supporting SMEs, developing human resources, and resiliency sound appealing, but should be interpreted in the context of the deeper exclusionary underdevelopment model that APEC is pushing.

The APEC economic leaders summit and its famous family picture wraps up the year-long APEC process of some 240 APEC-related meetings including at least 166 in the Philippines costing the country P7.9 billion just in 2015 (aside from another P2.1 billion in the 2014 budget). As before, the leaders’ statement will uphold “regional economic integration” and the long discredited globalization policies needed for this. These will keep the Philippines and the rest of the region on a dangerous path of underdevelopment for the many, and indeed, also ecological catastrophe for the planet.

None of which is to say that nothing can be done to change the situation and genuinely improve the conditions of the many. There was a time before APEC and before the era of globalization that people’s lives got better, even if slowly and sometimes haltingly, and economic policy was not so methodical in supporting corporate profits and swelling oligarchic wealth.

Economic policies were about the national economy producing goods, creating jobs, raising incomes, and providing public education, health and housing. At that time promoting capitalist enterprise and private profit was just one among many means to development and even then known to have serious limits. The need for the State to ensure purposeful, responsible, and democratic national action was widely acknowledged.

Today capitalist profit-seeking such as pushed by APEC is glorified as the main mechanism for development where improving social conditions are merely a side-effect or a matter of charitable dole-outs. But economics can be rational again and the severe imbalances in wealth and power that fetter human development and stifle economies can be dismantled.

The social and economic inequities in the country are exploding. Fortunately, in a larger sense and far beyond the likely forgettable episode of the 2016 elections, the political upheavals we sorely need to correct these cannot be far behind. This won’t be taking the special lane. – Rappler.com

Sonny Africa is Executive Director of IBON Foundation. He was taking his undergraduate and graduate studies at the London School of Economics and Political Science when the Berlin Wall was taken down and the neoliberal economic offensive picked up.