Part 1: The Philippines at its best at Paris climate talks

Reports of deaths and damages from the two most recent typhoons (Onyok and Nona) that devastated the Philippines have raised the urgency of understanding how the new global climate agreement can particularly help Filipinos address disasters. We have noted how typhoons seemed to have always marked the UN climate change negotiations, with super typhoon Yolanda, one of the strongest storms to make landfall in history, hitting the country in 2013 while the climate change talks were happening then in Warsaw, Poland. In 2014, the negotiations transpired while typhoon Ruby was also battering Manila; thankfully, there were fewer casualties then, but one life lost is one too many.

Recognizing the eerie coincidence, Sec. Emmanuel de Guzman, vice chair of the Climate Change Commission and also head of the Philippine delegation, started his final plenary speech recalling this: “For each of the past 4 years, at this time when we come for annual climate meetings, as our Earth spins to another end and another beginning of her voyage around the sun, a powerful typhoon visited the Philippines, carving out an immense swathe of devastation, deprivation and death of many of our countrymen, persistently and rudely reminding us of the significance of our role and the urgency of mission in this Conference of the Parties.”

He went on to describe how, for the Philippines, climate change means sorrowful catalogues of casualty and fatality; the countless voices of the homeless and the grieving – their very tears and screams carried to us by the winds and waves that blew their homes away. Secretary de Guzman pointed out also how “victim” is inadequate to capture the loss and damage visited upon us as each body counted “has a name and an age – is workmate or lover, neighbor or friend, son or daughter, father or mother:

Now typhoons Nona and Onyok came days after 195 countries – including the Philippines – adopted the climate change deal in the 21st Conference of Parties (COP21) in Paris, France. What difference does it make now though that we already have a legally binding climate change deal? How could this agreement concretely impact the lives of people from the countries and communities most vulnerable to climate change? What did we fight for and win in the Paris conference?

The Philippine delegation to Paris was ably led first by President Aquino who spoke at the leader’s summit and opened a big meeting of the Climate Vulnerable Forum on the first day of the conference. Aside from his presence being a big morale booster for the delegation, we considered Aquino’s two speeches as additional instructions for us, and as articulating our priorities for the two weeks of negotiations. 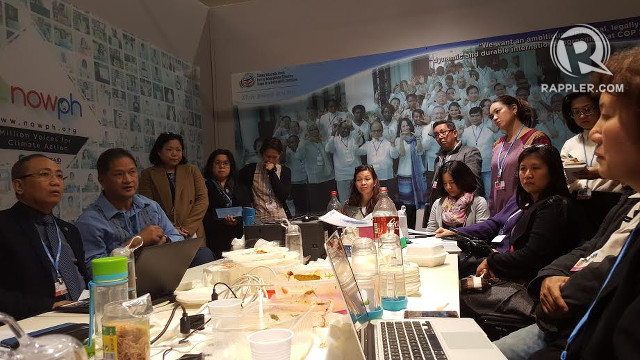 Our diplomats, let by Assistant Secretary and now Ambassador to New Zealand Gary Domingo, were also very competent and conscientious. We felt very assured that the country was represented in Paris by a sterling group of Foreign Service officers. It felt like going to battle and you had everything covered.

Critical also to our success in Paris was the presence of senior officials and technical experts from the Climate Change Commission, Office of the President, National Economic and Development Authority, PAGASA, and the Departments of Agriculture, Environment and Natural Resources, Transportation and Communication, Science and Technology, Finance, and Energy. We personally witnessed how our colleagues from government worked very hard to advocate our issues.

It would be fair to say that the Philippine delegation was enriched, its capacities substantially enhanced, by the inclusion of civil society advisers and experts from academe in its ranks. Indeed, some of us from civil society and the academe have been following and participating in these negotiations for many years and provided solid intelligence on what was happening, as well as strategic advice on what interventions would work best to promote Philippine interests. If in the future, civil society presence in climate change negotiations were challenged, Paris is the best illustration of why such presence is good, even essential for our interests. – Rappler.com

Conclusion: Part 2: The Philippines’ influence on the Paris Agreement