The country’s next leaders should focus on the youth

Apr 28, 2016 7:00 PM PHT
Klaus Beck
Facebook Twitter Copy URL
Copied
'Reaping the fruits of a demographic dividend is not too late for the Philippines, but it will not happen without investing in and involving the youth' In 2014,the United Nations Population Fund (UNFPA), released the State of World Population report, The Power of 1.8 Billion: Adolescents, Youth and the Transformation of the Future, which discussed the potential economic gains that countries with large working age population can enjoy through a “demographic dividend.”

The Philippines, which has more than 100 million people with one-third comprising of young people aged 10-24 years old, stands a good chance to benefit from this demographic dividend should it happen. That is the good news.

But to realize the demographic dividend, countries must be able to ensure that the young working-age populations are equipped to become educated, healthy, and productive members of the society.

(READ: UNDP: Invest in people to sustain growth in Asia-Pacific)

Demographic Sweet Spot and Dividend in the Philippines: The Window of Opportunity is Closing Fast, a study undertaken by UP School of Statistics Dean Dennis Mapa for UNFPA and the National Economic and Development Authority (NEDA), says that “the Philippines faces a demographic window of opportunity – a rare opportunity – to benefit from its relatively young population.” 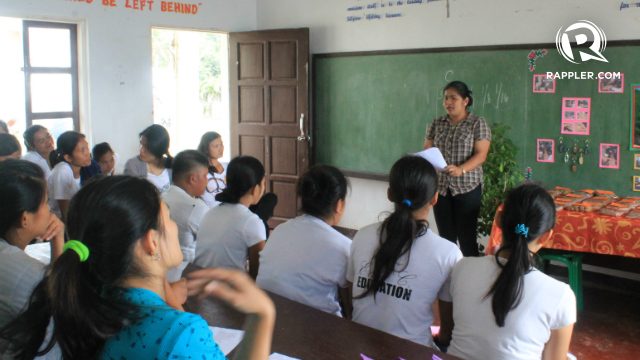 The study shows that this window of opportunity, however, is facing two major challenges: the slow reduction in fertility rate (the average number of children among Filipino women), particularly those from the poorest households, and the high unemployment and underemployment rates among young workers.

So what do we need to take advantage of the demographic window of opportunity? The study points out that putting in place policies and programmes that will: a.) address the unmet needs for family planning; b.) ensure that young people (especially girls) get proper education; and, c.) provide opportunities for productive employment, are critical during this period to prepare young people as they enter the working age phase of their life.

Globally, governments are paying more attention to their youth population through public policy initiatives. However, young people in general still encounter many challenges that hinder their smooth transition into adulthood and entry into the workforce.

The Philippines’ Responsible Parenthood and Reproductive Health Law, or the RPRH Law, attempts to address the problem of high fertility among the poor by making family planning more accessible. However, the law has a unique approach when it comes to Filipinos under the age of 18. It restricts access of minors to modern contraceptives in government health facilities unless they do so with parental consent.

This, despite the fact that teen pregnancy in the Philippines has been increasing over the years. A study released recently by UNFPA on the sexual and reproductive health of young people in Asia-Pacific shows that teen pregnancies in countries in the region have slowed down except in the Philippines where it continues to rise. Young Filipinos’ lack of access to reproductive health information and services is the main reason for this.

Other challenges hound the RPRH Law more than two years since the Supreme Court affirmed the Constitutionality. Acting on the petition of a private sector group, the Court issued a temporary injunction prohibiting the Department of Health from distributing and dispensing certain modern contraceptives, including a subdermal implant, which has grown popular among women since it was introduced in the Philippines a few years ago.

For most girls, especially the poor, getting pregnant at a young age is a total game changer. They drop out of school for fear of stigma and discrimination. The responsibility of being a young parent also pushes them to take on menial jobs in exchange for an income that is often not enough to make ends meet. That is, if they even survive the many risks posed by pregnancy and childbirth on their young bodies.

With their education and reproductive health safeguarded, young people will be better prepared to become and remain part of the workforce and contribute to sustainable development.

The Sustainable Development Goals cannot be realized without the youth – today’s SDG Generation, or Generation S. Addressing their concerns and needs are integral to ending poverty. Reaping the fruits of a demographic dividend is not too late for the Philippines, but it will not happen without investing in and involving the youth. – Rappler.com

Klaus Beck is the Philippine Country Representative of the United Nations Population Fund.

YouthVote Philippines and Young Public Servants are hosting “The Filipino Youth Agenda on SDGs and the 2016 Elections,” a public forum for congressional candidates on Saturday, April 30, at the Samsung Hall in SM Aura, Bonifacio Global City, Taguig. The event is in partnership with UNFPA, the Philippine Legislative Committee on Population and Development, the SDG Youth National Convergence, and Rappler.com. To participate in the forum, register at http://tinyurl.com/YVPForum2016. For more information, visit UNFPA Philippines’ Facebook page.