Why contractualization is bad for everyone, not just for workers As expected, business groups such as the Employers Confederation of the Philippines and individual business leaders are claiming that the epidemic of contractualization plaguing the country is actually good for workers and for Filipinos.

They suggest that contractualization – or the practice of hiring workers as “contractuals” rather than as “regular” workers so as to avoid giving them the benefits that they are legally mandated to receive – allows capitalists to increase their profits, hire more workers, contribute to economic growth and therefore benefit all Filipinos.

If we ban or significantly limit contractualization, they argue, many companies will either close down or not be able to open to begin with. Their profits will fall, many workers will lose their jobs, the economy will contract, and all Filipinos will consequently suffer. Hence, to ban or limit contractualization is not only anti-worker but also anti-Filipino.

This argument is not only self-serving, it is also wrong.

By allowing capitalists to intensify their exploitation of workers, contractualization actually enables capitalists to pay workers less for the same work, stunt economic development, and therefore harm the interests of all Filipinos – including of capitalists themselves.

But, more than that, contractualization also enables capitalists to weaken the working class’s ability to resist exploitation, organize collectively, and fight for a better society.

Capitalists exploit workers by expropriating the “surplus” or the extra products they produce on top of what they produce in order to survive.

Capitalists are able to do this because, deprived of access to the means of subsistence under capitalism, workers are forced to sell the only thing they possess—their labor-power or their ability to work—to capitalists in order not to starve and die.

To buy this labor-power from workers, capitalists pay workers a wage which is more or less equivalent in value to the goods and services (food, clothing, housing, etc.) needed to produce the labor-power workers sell to capitalists—value that workers are typically able to produce during just part of the working day.

But in exchange, capitalists gain control of workers’ labor during the entire working day, enabling them to appropriate the value of all the goods and services they produce during the entire day—value which is greater than the wages they receive.

Driven by competition, however, capitalists are also forced to intensify their exploitation of workers by extracting more surplus value from them. They usually do this in two ways: by making them work longer for the same wage or by making them work faster.

But they can do this by effectively reducing the value of their wages – i.e. by depriving them of all the additional benefits (13th month pay, SSS contributions, etc.) that they are otherwise obliged to give them.

This is effectively what contractualization amounts to: a wage cut or a de facto reduction of the value of the labor-power that workers sell to capitalists – an attempt to work around the minimum wage laws won by workers’ struggles.

This could increase the profits of individual firms and lead to hiring additional workers for a time but more people suffer as a result.

This is because by giving tens of thousands of contractual workers less than what they should be receiving had they been employed as regular workers, capitalists also effectively reduce demand for the goods and services that the workers would otherwise have demanded from the subsistence-goods sector, thus reducing the profitability of firms in these sectors and driving these firms to fire workers – or hire fewer workers than they might otherwise have.

Moreover, at least part of the additional value that would have otherwise gone to workers had they not been contractual goes instead to capitalists who – under conditions of reduced demand – spend this amount not on expanding production but on luxury goods and services or on speculation.

But the practice of contractualization does not only hurt workers’ and capitalists’ immediate interests, it also undermines their long-term interests.

By giving tens of thousands of contractual workers less than what they should be receiving had they been employed as regular workers, capitalists are also depriving them of the resources they could use to lift themselves from abject poverty and perennial insecurity. 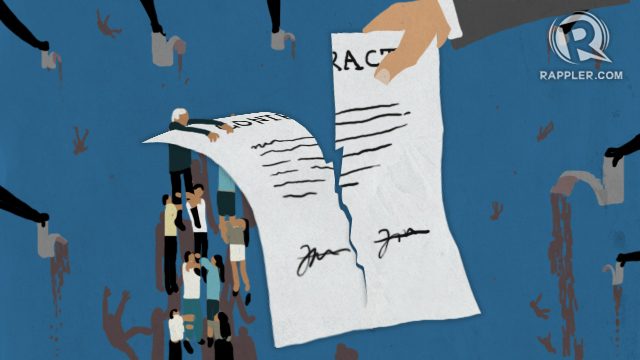 Insofar as freedom from destitution and insecurity enables or improves workers’ capacity or confidence to engage in politics, capitalists are therefore also depriving workers of the resources they could use to enhance their capacity to fight for their interests, resist exploitation, assert their democratic right to determine their own destinies, and build a different kind of society.

Workers who are constantly desperate to have their contracts renewed by their employers are likely to be even more fearful of antagonizing capitalists, let alone of engaging in political struggle.

Simply put, workers facing the axe are less likely to do anything that could make the employers remember their names.

And even if they were willing to fight for their rights, their ability to do so is even more constrained than usual since they are not even legally allowed to form or join unions as contractual workers.

And even if they did risk joining or forming workers’ groups, their ability to sustain these groups is also hindered since they typically aren’t allowed to stay long enough in the same firm or factory, and they are therefore also unable to form the lasting relationships with fellow workers that they need to enhance their political organization.

All these may be “good” for individual capitalists who want to crush unions or workers’ groups so they could keep their own workers’ wages low and increase their profits.

But this is bad for the larger society since strong, organized labor movements have proven to be a crucial precondition for advancing progressive social reforms which have proven to be beneficial to all – even to capitalists themselves.

Think, for example, of the 8-hour work day, social services such as public education, health care – or for that matter the right to regular and secure or non-contractual employment: all of these were won through the action of organized workers and all these have ended up actually saving capitalism from itself.

More importantly, however, weakening the labor movement is also bad for the larger society since strong, organized labor movements are necessary for the broader social transformations needed to create a better society – one that can save capitalists from themselves.

Not a just an economic but a political fight

Contrary to short-sighted business organizations, then, contractualization is actually bad not just for workers but for all Filipinos.

The question is: Why – after promising to immediately end this practice as soon as it assumes office – is the Duterte government still seeking a compromise with business groups which are unable to see, and which refuse to advance, the general interest?

Why – after promising to make a clean break from the ‘yellows’ and to crack down on the “oligarchy” – is the Duterte government shirking from ending a practice that was effectively encouraged by the previous administration and that benefits some of the country’s largest oligarchs?

Why, after nearly 100 days in office, is the Duterte government still just hemming and hawing and now championing a win-lose deal – a win for capital, a loss for workers – that has been rejected by even the more conservative labor federations in the country?

Why, in short, is the supposedly progressive Duterte government helping perpetrate a practice that is patently anti-worker and anti-Filipino? – Rappler.com

Herbert Docena is a PhD candidate in sociology at the University of California, Berkeley and a member of the Bukluran ng Manggagawang Pilipino.