[Newspoint] The mouse that roared

Oct 30, 2016 9:30 AM PHT
Vergel O. Santos
Facebook Twitter Copy URL
Copied
It's about a tiny European duchy that, having fallen into economic desperation, decides to declare war on the US on the historical evidence that no nation has ever gone hungry again having done that

One’s moment on the world stage – that was the opportunity that proved too good to pass up for Rodrigo Duterte in China. And so, like the compulsive performer he is, he seized the opportunity, and spoke his line.

“I announce my separation from the United States, both in military [and] economics,” he told his audience in Beijing’s Great Hall of the People. “I’ve realigned myself in your ideological flow, and maybe I will also go to Russia to talk to Putin and tell him that there are three of us against the world – China, Philippines, and Russia.”

Duterte was doubtless miscast; he lacks the stature to be even remotely credible as a triumvir with Xi Jin Ping and Vladimir Putin, and so does his country compared with theirs. Both Xi and Putin had long won their battles for leadership supremacy, battles fought mercilessly, as always the case in communist-party politics, when Duterte himself was yet a mere mayor of a provincial city (population: two million people, a 50th of the Philippine total – a 500th of the Chinese) or congressman for a district.

Still, Duterte has won his craved attention; after all, he is president of a country, too, and what he did in China (and has been doing actually as a matter of habit) was a bold thing – come, see and, in a sense, conquer; indeed, he has got much of the world, not the least the US, looking, askance.

Surely, it all goes beyond theater, but for now it seems just as interesting and instructive to set it in that light as in any other – as life imitating movies, if not art.

Duterte seems to me a natural for theater – that is to say, abnormally perfectly cast for it. He doesn’t have to act, he doesn’t need to make the effort, he just acts. Theater acting is a very conscious craft; one trains for it – hard – then, for competitive edge and staying power, hones one’s skills for it continually. Inhabiting another character, the very essence of theater, means living another consciousness.

Duterte does not possess the capability, therefore has no use for it. Whatever capability he happens to have would in fact seem irrelevant; he wings the presidency, and, seemingly, much everything else. How to explain him normally when he is cast in a mold all his own?

His, indeed, is a life circumscribed in a clinical profile entered in evidence in a marriage-annulment suit brought, and won, by his wife, and now a matter of court record. In that document, Dr. Natividad Dayan, a former president of the International Council of Psychologists, pronounced him “narcissistic”, tending “to demean [and] humiliate others, and violate their rights and feelings”, and possessed of “a grandiose sense of self-entitlement.” 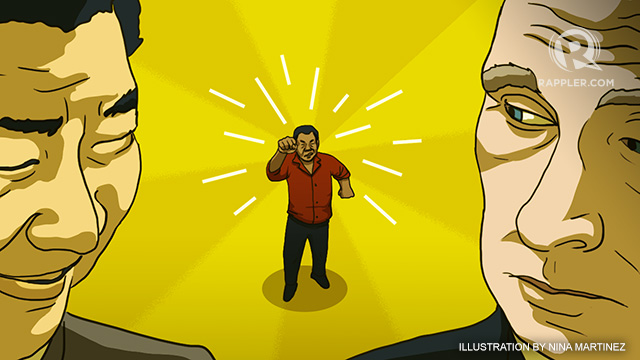 Rebel and Mouse happened in the same decade, the first in 1955, as a movie, the second as a satirical novel in the same year and also as a movie a few years later. We were both – Digong and I – in our pre-teens at the time, but I have seen both movies in later reruns. If Digong saw them, too, I don’t know what impression they left him – if they left any at all – that might have been deep enough to influence his character.

At any rate, I won’t go into it; I’d rather leave it for clinical parsing – and with great confidence I do so – to the expert Dr. Dayan, whom I happen to have known somehow.

But for what public interest or insight they might contribute to the understanding of Rodrigo Duterte, our president, let me recall what the Rebel and the Mouse are about.

Rebel Without a Cause is about a troubled young man who arrives in town and stirs up the town’s youth’s own rebellious spirit. In case you might be interested as a moviegoer, it’s a five-star James Dean starrer.

The Mouse that Roared is about a tiny European duchy that, having fallen into economic desperation, decides to declare war on the US on the historical evidence that no nation has ever gone hungry again having done that. It is rated four-star – no Peter Sellers film has rated lower, I guess.

While the Rebel may have informed today’s stock references for growing-up identity crises, the Mouse continues to inspire fresh analogies in relationships between nations. And The Mouse that Roared is precisely the role Duterte played, if impulsively, unconsciously, on the world stage from China. – Rappler.com