Nov 9, 2016 10:32 AM PHT
Rappler.com
Facebook Twitter Copy URL
Copied
'It is our duty as senators, as Filipinos, as students of history, to stand against this travesty and say – as has been said before – never again' 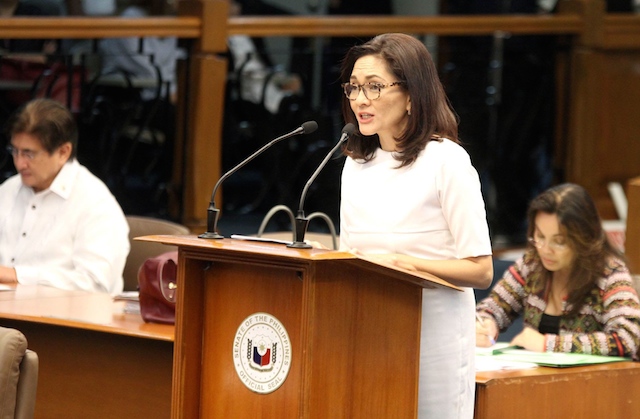 Neophyte Senator Risa Hontiveros took a step further and delivered a privilege speech the same afternoon the ruling was promulgated. An activist in the 1980s, she has lately been going around, helping organize book readings for children to teach them about the evils of Martial Law.

In her speech at the Senate, she said the ball is now in the hands of President Rodrigo Duterte, if he will stick to his original plan to allow the dictator to be buried at the Libingan ng mga Bayani (Heroes’ Cemetery), or drop the plan altogether despite the High Court’s decision.

Below is the full text of Hontiveros’ speech titled “Failing the test of history.”

Mr President, I rise on a matter of personal and collective privilege.

I rise on behalf of Susan Quimpo, a prepubescent girl during the early years of Martial Law, who spent her weekends packing cooked rice for detainees at detention centers holding political prisoners. Five of her siblings were imprisoned during Martial law – all of them student activists belonging to the underground movement. Her brother Nathan was stripped naked and clubbed several times by his captors. Her brother Jan, and I quote from her book Subversive Lives, “had his head repeatedly immersed in a commode filled with urine, water was injected into his testicles, and his feet were doused then jabbed with live wire.” Jan Quimpo joined the ranks of the desaparecidos, and the last conversation Susan had with him was when he asked her to leave some dinner. Another brother, Jun, was shot in Nueva Ecija in 1981.

I rise on behalf of Sixto Carlos, now a jolly man in his 70s with ruddy cheeks and an easy laugh. He was arrested with no charges filed in 1978 and put under solitary confinement for two years. He was viciously beaten, had boiling water poured at him, and was hung from the ceiling from his handcuffed hands. In his own words, he said, “I was held on either arm by two men and the third man sat on my lap. The blindfold was removed and replaced by a towel on my face. They commenced to put water over the towel on my face. I had the sensation of drowning.” This is what is known as waterboarding, an innocuous name for a torture technique so repulsive and dehumanizing.

I rise on behalf of Etta Rosales, former congresswoman and former chairperson of the Commission on Human Rights, who was repeatedly raped and tortured during Martial Law. She recounts her torture under the hands of her prison guards: “They tried to make me speak by burning me, pouring what felt like hot wax from a burning candle on my arms and legs. When that didn’t work, they tore off my clothes, pressed the barrel of a gun against my temple and played Russian roulette.” When she was elected congresswoman of Akbayan in 1998, she met one of her captors who had now become her colleague. “The last time I met you,” Etta said, with her trademark candor, “was in the military safehouse where I was tortured.”

I rise to tell them, during this winter of anxiety and uncertainty, that there are many of us who still remember.

I want to tell them that there are mothers like myself, who tell their outspoken millennials that their freedoms in social media did not come for free and that their counterparts in the ’70s were being thrown in prison for speaking their mind.

I want to tell them about the many young people I have met – so far removed from the stereotype of the uncaring, self-absorbed millennial – who ask me what they can do to fight the forces of historical revisionism that are at work and who assure me that the struggle to preserve our collective memory is a struggle their generation shares with ours.

But we also know that the decision to give the late dictator a heroes’ burial lies ultimately in the hands of President Rodrigo Duterte. I call on the President to respond to the challenge of history and reject with finality all plans to give Marcos a hero’s burial. The Libingan ng mga Bayani is the designated place for Filipino soldiers, war veterans, and citizens whose contributions to the nation render them fit to be called heroes.

Given the long history of the Filipino people with tyranny and oppression, the Libingan has been created to honor the memory of our brave countrymen who fought for freedom and liberty even in the face of superior force, so that the present generation may remember and emulate their legacy. It should be the final resting place of heroes – a symbolism that is not lost on the Marcos family, who has been lobbying feverishly for his burial and, if our President is correct, even funded his campaign to secure this concession.

Mr President, in Germany, Adolf Hitler’s initial grave is now a car park in Berlin. Idi Amin, the Ugandan dictator notorious for maintaining torture chambers in Kampala, is not even buried in his own country. In Serbia, Slobodan Milosevic’s party pushed heavily for his burial in the Alley of the Greats, but was rebuffed. He is now buried in his hometown. In Haiti, Francois “Papa Doc” Duvalier, who brought Haiti to economic ruin, used voodoo legends to control his people and executed his political opponents, was denied a state funeral after his death. His grave in Port Au Prince is now in shambles. Pol Pot, known as The Butcher of Cambodia, was unceremoniously burned in a pile of rubbish. His cremation site in Anlong Veng is now a tourist destination and many Cambodians travel to the site to spit on it. Muammar Gadaffi’s body, after being displayed for 5 days by the new leaders of Libya, was laid to rest in a simple unmarked grave.

But, Mr President, it is not only for the victims of Martial law that I rise, for the generation of my parents and for my generation who have lived with the enduring wounds of martial law. I also rise for our younger generations – those who will only get to listen to the stories of our wounds, and who we hope will see in these stories our deepest truths. I rise for our millennials who will probably never meet Susan and her siblings, or Sixto Carlos, or Etta Rosales, but who we hope will realize that the heroes of Martial Law were young persons like themselves. Ang nagpabagsak sa diktadura ay katulad lang din nila, katulad din ng aking mga anak: masayahin, palabarkada, palatawa, may pangarap sa buhay. Ngunit tumalima noong hinamon ng kasaysayan.

Mr President, nagpasya na ang Korte Suprema. But no tombstone, no grandiose cemetery can change the fact that Ferdinand Marcos was not a hero. He was a plunderer, torturer, and a thief with a family now seeking to rewrite history to serve their interests. He coopted institutions – this Senate included – in order to consolidate all power to himself.

It is our duty as senators, as Filipinos, as students of history, to stand against this travesty and say – as has been said before – never again. Only then can we look back to the past with pride, and to the future with hope. Let us not fail the test of history. – Rappler.com

Do you agree with Senator Hontiveros’ views about the hero’s burial for Marcos? What do you think of the Supreme Court’s ruling? Leave your comments below, or write a blog on X.