Reexamining the Philippines’ place in the world

Nov 27, 2016 11:40 AM PHT
Gideon Lasco
Facebook Twitter Copy URL
Copied
Lasco: 'This intimacy with different lands should not only place us at the heart of the world; it should also should give us a heart for the world' CUSCO, Peru – The Philippines, with its 7,107 islands, can be considered part of the Pacific Islands and of Oceania. From Taiwan, the big bulk of the great Austronesian migration may actually have passed through the Philippines, and many of the languages from Madagascar to Easter Islands are similar to our own: when you call for “tulong” in Indonesia, they will understand. We share with Austronesian peoples root crops like gabi and ube; our knowledge in marine navigation; our intimacy with the sea.

The Philippines is, of course, very much part of Asia. We have been trading with our neighbors long before the coming of Magellan. When times were tough in China, Japan, and elsewhere, their people sought refuge in our country and we welcomed them with open arms (hence many Japanese-looking Pangasinenses). More than the rice that nourishes our stomachs, we share with our Asian neighbors values like strong family ties and deep respect for our elders.

Our having been a colony of Spain for over 300 years, for much of that time governed from Mexico, gives us much in common with Latin America. There is lechon in Puerto Rico; pork adobo here in Peru; chicharron in Bolivia. The Don Bosco athletes wear yellow in Ecuador, and of course the La Sallians wear green. We share with the Latinos culture-bound illnesses like pasma, values like palabra de honor, and a warm, easygoing approach to life.

The Philippines is very much part of the Christian world (we are the third largest Catholic nation), but we are also part of the Muslim world by virtue of Sulu, Maguindanao, Maranao, and many other proud cultures in Mindanao and elsewhere. Today, Filipino Muslims continue to enrich our culture and testify to the possibility of pluri-religious co-existence.

The Philippines was a colony of the US for 50 years and we are deeply connected to America. Despite our (rightful) mixed feelings about the US government and American hegemony, our bonds with America go deep, embodied by the 3.4 million Filipino-Americans that make Tagalog the fifth most spoken language in the US.

The Philippines is truly where East meets West, where Christianity meets Islam, where the ocean meets the continent. Far from historic past, these connections are living present, and continually growing, as the Filipino diaspora continue to enrich our bonds with other countries. This intimacy with different lands should not only place us at the heart of the world; it should also give us a heart for the world: an empathy for the struggles and sufferings taking place beyond our shores. Not just because there are Filipinos living out there, but because the peoples living there are our neighbors and friends.

Sadly, we have not maximized these bonds with other nations, both in diplomatic and cultural terms. Our foreign policy is largely oriented to the United States, Japan, China, the European Union, and of course, the ASEAN. Our cultural imaginary is even narrower: we are more familiar with Los Angeles, London, and Paris than Luang Prabang, Lima, and Palembang.

What do we need to remedy our global disconnectednes? 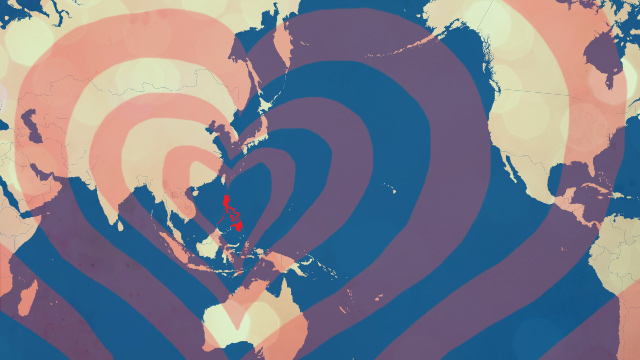 For sure, a truly “independent foreign policy” is a step in the right direction – for as long as it is grounded in respect. Health Secretary Paulyn Ubial’s warm reception in Havana speaks of the possibilities that lie when we go beyond our usual engagements.

But diplomacy can only do so much: APEC has not brought us closer to Peru, nor ASEAN to Laos and Cambodia. Though surely we can prod President Duterte to look beyond Vladimir Putin and Xi Jinping, we Filipinos – not just our leaders – must ourselves realize and take ownership of our place in the world.

Traveling, as I have experienced, helps a lot: it is thanks to my trips to different continents that I learned of our connections with them. Cultural – even culinary – exchange, is likewise beneficial, and the same can be said of the teleseryes that we Filipinos are exporting to – and importing from – various countries.

But most importantly and fundamentally, we need a renewed sense of history – or perhaps a retelling. Alas, much of our national narrative paints ourselves as objects of colonialism. Without denying the sufferings and betrayals we endured in the past (there are too many to mention), we should also be reminded of how throughout our history we have forged bonds with people from all over the world; and that oftentimes, these bonds have shown the best of humanity.

We need to be reminded that 15 US soldiers actually defected to the our side during the Philippine-American War, believing in the righteousness of our cause; and that Americans like Mark Twain denounced their own government’s colonial ambitions. By adding nuance to the way we regard other nations, we avoid generalizations that lead to hate, conflict, and suffering.

We need to be reminded that 112 Filipino soldiers died to fight for the freedom that South Korea enjoys today; and that we have always opened our doors to refugees, from the Jews during World War II to the Indochinese during the Vietnam War.

When we realize that we Filipinos, far from passive victims of history, have always been active in making not just our history but that of the world, we begin to overcome the feeling of smallness that sets back our geopolitical imagination. What our past should give us is not an enmity for those who oppressed us, but an empathy for those who experience oppression.

What our past should give us is a not a feeling of victimization or entitlement, but a dignity of a people that has suffered much – but has overcome more. – Rappler.com

Gideon Lasco is a physician, medical anthropologist, and commentator on culture and current events. His essays have been published by the Philippine Daily Inquirer, Singapore Straits Times, Korea Herald, China Post, and the Jakarta Post.