The proposal to fully subsidize tuition fees in all state universities and colleges (SUCs) is not as straightforward as it seems.

On the one hand, proponents in Congress say that this will help improve the plight of “financially disadvantaged but deserving students.” After all, the Constitution states that the State shall provide “accessible” and “quality” education to all (see House Bill 5905 and Senate Bill 1304).

On the other hand, critics say that subsidizing college tuitions will be fraught with many problems. Not only will it be inequitable (serving as a subsidy for rich students), but also distortive (inducing some rich students to shift into SUCs) and unsustainable (requiring enormous fiscal resources yearly).

In this article we argue that, although well-intentioned, the free tuition policy alone cannot make SUCs significantly more accessible to poor students. Instead, we need to focus more on the disadvantages that poor students face much earlier in their lives.

It’s true that poor students today have a harder time gaining access to education in SUCs. Figure 1 shows the distribution of college students across income groups, both in public and private colleges. The gray bars show that – as one would expect – students in private colleges are likelier to come from richer than poorer backgrounds.

If public colleges were an “equalizer” of sorts, one would expect to see an opposite trend in SUCs: students there should be likelier to come from poorer backgrounds. Subsidy to the richest students

The data above point to the glaring disparity between the rich and poor’s ability to access education in SUCs. To the extent that government surveys typically fail to capture responses from the richest households, the degree of education inequality may actually be larger.

If financial access were the only problem, then free tuition may help the poor access SUCs more. But this is not the case. Public colleges, unlike public elementary and high schools, almost always screen students using other criteria (e.g., admission tests and high school grades).

Hence, perhaps a more important policy issue to address is why the richest students can better access SUCs in the first place, and why they edge out their poorer counterparts.

The truth is, the poorest students today are edged out in SUCs due to many disadvantages they face in their early years.

Rich students usually find themselves being propelled through their education with the full, undivided support of their family, relatives, and community. They are likelier to be enrolled in exclusive schools with top facilities; likelier to be exposed to numerous extracurriculars and sports; and likelier to be paired with tutors whenever they encounter difficulties in school.

In contrast, poor students usually find themselves in more challenging situations. They are likelier to be enrolled in public schools with more crowded classrooms and subpar facilities; likelier to take on odd jobs to help in family finances; and likelier to study by themselves without the benefit of expensive tutors.

Such disadvantages are magnified by the relatively poor quality of public education, which has dragged the nation’s overall educational quality. Figure 2 shows that, although strides have been made in the past decade, the quality of math and science education in the Philippines still ranks among the worst in the region. 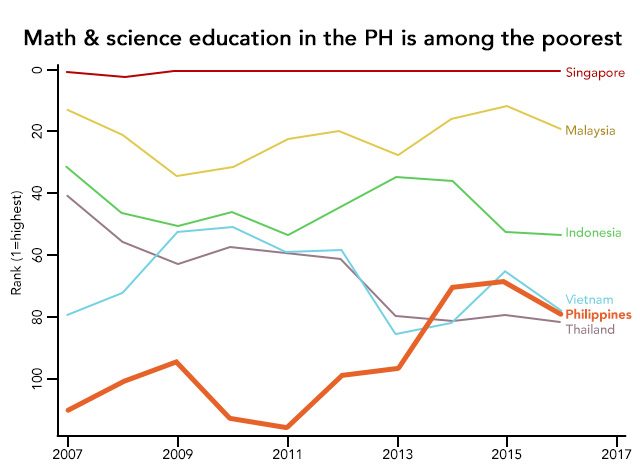 Of course, some public schools are of top-notch quality (e.g., science high schools). But today it is not uncommon to find some very rich families sending their kids to these public schools to boost their chances of admission in the top universities. Even at this level, rich students “crowd out” or compete away slots from poor but bright students.

We need to address more strongly these disparities between the early lives of rich and poor students. Otherwise, we should not be surprised that rich students are the ones in SUCs, not poor students.

Some programs already aim to bridge such inequalities of opportunity.

For instance, this is precisely the rationale behind Pantawid Pamilya, which incentivizes very poor parents to send their children to school, with the end goal of breaking the transmission of poverty across generations.

The K to 12 program is yet another intervention in basic education, albeit with a slightly different objective: to expand job opportunities and reduce the “education-skills mismatch” in the country. However, K to 12 still suffers from large shortfalls of teachers and facilities, and it will take longer for the program to help students better prepare for college or otherwise.

Many people see public college education as a great “equalizer” of Philippine society: a system that can help reduce the gaps between the richest and poorest Filipinos. But as things stand, SUCs are inequitable and accessed more by the richest students than the poorest.

There’s no denying that high tuition fees are an important barrier in SUC education. But rather than just subsidize tuition fees, our lawmakers should address “accessibility” in a much broader sense. That is, they should aim at the problems faced by poor students as early as their elementary and high school years, not when they are already in college.

If we fail to adequately tackle these early disadvantages, then free tuition fees will do little to make public college education the “equalizer” we all hope it to be. – Rappler.com