Apr 1, 2017 9:30 AM PHT
JC Punongbayan
Facebook Twitter Copy URL
Copied
With the vast popularity of the President, there’s no politically better time to push for a contentious tax reform bill

It’s tax season again, and as we troop to file our income tax returns, it may be a good time to revisit the state of the proposed tax reform law.

Unlike the death penalty bill, the tax reform bill (HB 4774) is having a much harder time going through Congress. It failed to hurdle the House Ways and Means Committee, and was reverted to a Technical Working Group. Lawmakers aim to craft a substitute bill that will harmonize it with many other tax-related bills.

One reason for the delay is that many lawmakers are anxious about the bill’s proposal to increase excise taxes on petroleum products. Since these could raise the prices of basic consumer goods and transport services, many lawmakers have taken turns branding the tax reform proposal as “glaringly anti-poor”, “heartless”, and “unreasonable”.

In this article we show that, despite some inflationary impacts, tax reform will not be anti-poor as many claim it to be. On the whole, it will even put more money in our pockets. A watered-down version of the bill that omits these revenue-enhancing measures may defeat the purpose of tax reform itself.

As I said in a previous article, our tax system not only burdens the poor and benefits the rich disproportionately. It also yields too little revenue given the distortions it creates.

TRAIN aims to make the tax system more pro-poor by taxing the poor less and putting more money into their pockets. Aside from continuing to exempt minimum wage earners, more workers (such as clerks and call center agents) will be exempt from income taxes and therefore enjoy considerable tax savings (see Table 1). 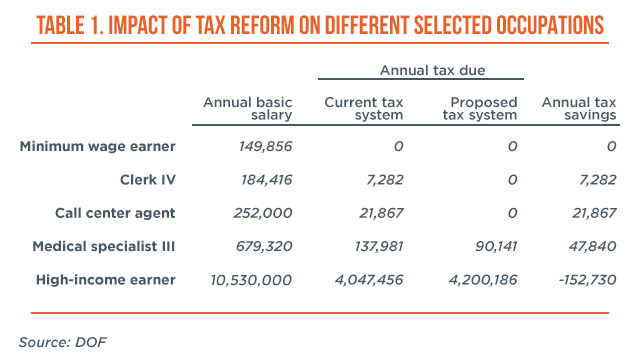 Figure 1 shows that by exempting all incomes below P250,000, around 83% of current taxpayers will be exempt from personal income taxes. Only the richest Filipinos (the top 1% of taxpayers) will be hurt by higher tax rates. 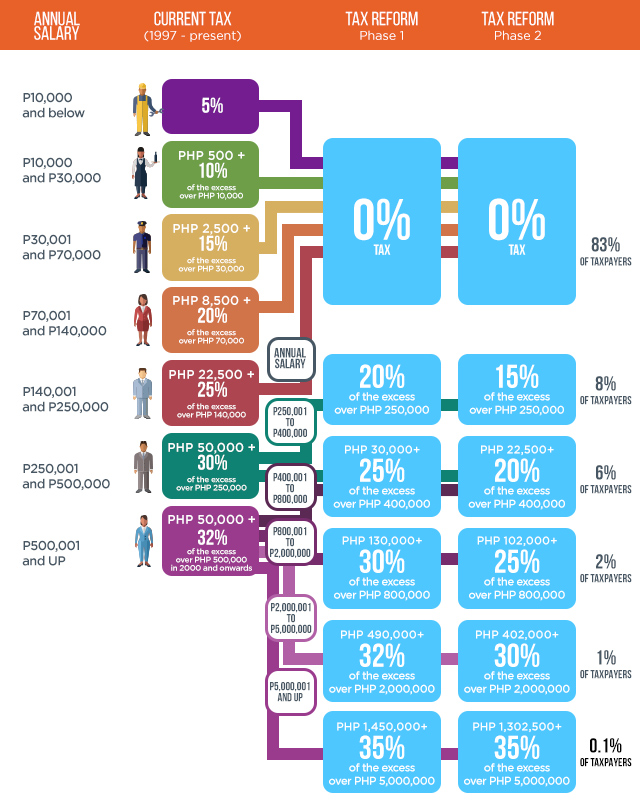 But making the tax system more equitable will entail huge tax revenue losses. That is why TRAIN aims to offset these revenue loses by imposing new or higher taxes on petroleum products, and reducing the number of tax exemptions.

Will higher petroleum taxes be anti-poor?

Many lawmakers believe that these new or higher taxes on petroleum products will, in themselves, be inequitable and anti-poor. To the extent that petroleum products are used in the transport of goods and people, they say that such taxes could stoke inflation and hurt the poor.

Figure 2 shows that excise taxes on petroleum products have been constant for the longest time. For instance, the price of premium gasoline increased by 344% from 1997 to 2016, yet the tax per liter has remained at P4.35/liter over that time (0% growth).

The price of diesel products similarly increased, and yet they have been tax-free for the longest period. All these represent huge forgone tax revenues that the government could have spent on many important projects. 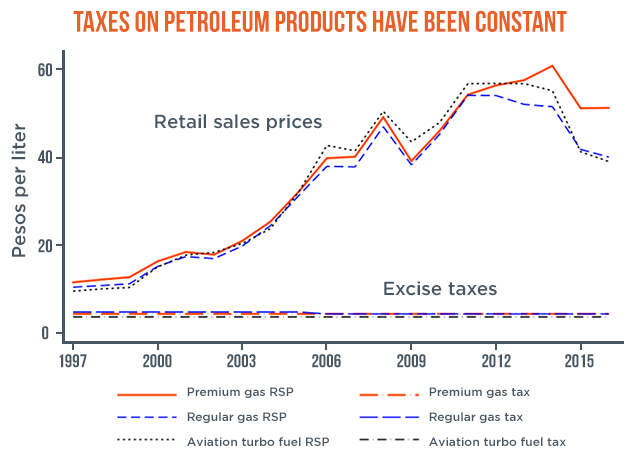 Even if not anti-poor, the Department of Finance concedes that the new taxes may, indeed, result in higher inflation in the short run: their calculations suggest that inflation may go up by 1.5 percentage point. With inflation already at a 2-year high of 3.3% as of February 2017, higher excise taxes could mean even higher inflation rates.

Even so, there are 3 reasons to believe that such higher inflation is not as bad as some lawmakers paint it to be.

First, as a testament to its robustness, our economy has successfully weathered higher inflation many times before. For example, there was a 76% increase in diesel prices from January 2016 to January 2017, but this was not accompanied by runaway inflation in food, transport, and utilities (see Figure 3). 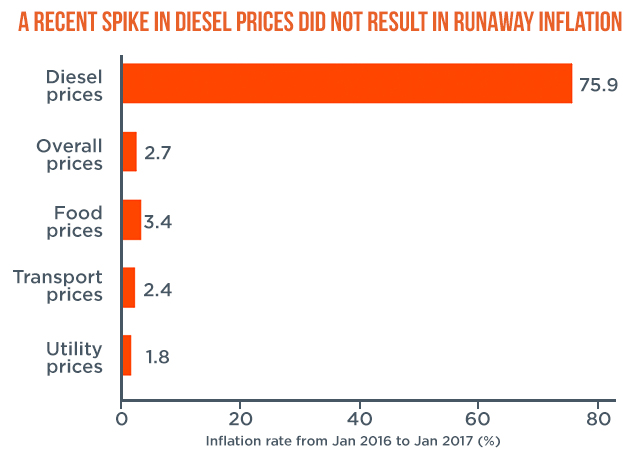 The RVAT reform of 2005, which raised the value-added tax (VAT) to 12%, also raised the inflation rate by 1.7 percentage points, before going down by 1 percentage point the year after. In any case, the Bangko Sentral ng Pilipinas always stands ready to rein in inflation if need be.

Second, part of the higher petroleum taxes will be used to cushion the effects of the short-run inflation spike. As much as P36 billion of new revenues will go to income transfers to the poorest 10 million households. Pantawid Pamilya beneficiaries will see larger transfers, and other poor households not covered by Pantawid will also receive unconditional cash transfers for up to a year. Cash cards will also be given to owners and operators of PUVs to offset higher transport prices, in a program called Pantawid Pasada.

Third, higher petroleum and automobile taxes will be used to combat our worsening traffic congestion and pollution problems, which cost Filipinos billions of pesos daily. Aside from discouraging new vehicle purchases and road use by the rich, a significant chunk of such taxes will fund infrastructure, public transport modernization, and similar projects that could alleviate our everyday “carmaggedon” woes. 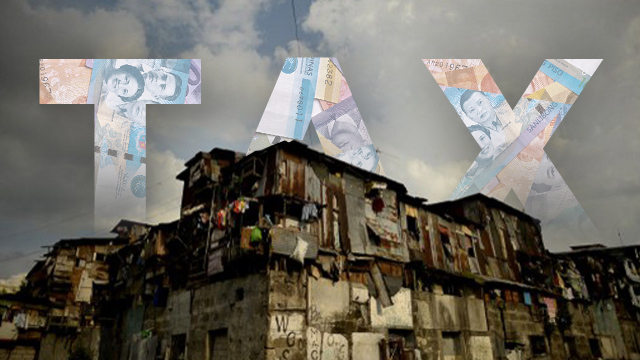 Many lawmakers seem to think that tax reform can be achieved even with just its revenue-eroding provisions, and without its revenue-enhancing provisions. In other words, they believe that we can make the tax system more equitable without offsetting the revenue losses it will generate.

Unfortunately, watering down the bill this way could only defeat the purpose of tax reform, and the government may end up with significantly fewer resources to spend both in the short and long run. For instance, without significant revenues, the proposed infrastructure “golden age” will be a pipe dream.

Lawmakers are right to believe that imposing new taxes on diesel, petroleum, and automobiles will somehow stoke inflation. Their apprehension is completely understandable: with the May 2019 elections fast approaching, the phrase “new taxes” might hamper their reelection bids.

Even so, our lawmakers need only ensure that the tax reform bill includes provisions that will cushion the effects of temporarily higher inflation. Also, with the vast popularity of the President, there’s no politically better time to push for a contentious tax reform bill.

If only our lawmakers set aside their politics momentarily, we can use this rare window of opportunity to solve our tax system’s enduring problems once and for all. – Rappler.com