May 28, 2017 12:50 AM PHT
Facebook Twitter Copy URL
Copied
Duterte is using a sledgehammer to take on a job that is properly accomplished with precision tools. It is the convenient but indiscriminate weapon of an authoritarian leader.

Burdening an already overstretched AFP with the responsibilities of administering and governing a civilian population of 22 million promises to divert military action against terrorists. Rather than give the AFP the upper hand against the self-styled local terrorists, martial law will instead pit the military against civilians.

The AFP as an organization, challenged as it is by internal and external armed threats as well as demoralization for its Commander-in-Chief’s capitulation to China and romance with the local communist movement, is completely unprepared to take over the functions of civilian government in Mindanao, much less in the entire archipelago. It simply was never trained for that. To add governance of civil society to its military role will only breach its already extended resources. This will only further result into a desire to shortcut its administration over civilians through the curtailment of civil liberties, as it will run Mindanao LGUs the same way it runs its military camps.

This is the nuance between the constitutional power of the President as black letter law and its practical but undesirable effect on civilian supremacy. More often than not, as proven by our own historical experience, martial law never defeats subversion, insurrection, or terrorism. Just because it is enshrined in the Constitution does not mean that martial law is a desirable option, especially when used by a president with authoritarian and dictatorial tendencies, who is anti-democratic and despises dissent in his most inner core, and who has displayed his capacity for enforcing a policy of social cleansing both as mayor and as president, resulting in the extrajudicial killing of more or less 9,000 human beings so far.

The martial law enshrined in the Constitution as an extraordinary measure definitely envisioned its use by an authoritarian president like Duterte. Thus, the Constitution likewise set in place check-and-balance measures of Congressional reporting and approval for extension as well as review by the Supreme Court. But already we are witnessing how these measures can be circumvented through the mere expediency of Congress, or the two heads of Congress, refusing to convene for a legislative deliberation on the propriety of the declaration of martial law and its geographical coverage. (READ: No joint session on martial law? Congress ‘shields’ Duterte)

The Constitution might be in place, but its Chief Executor’s desire to replace it even as he continuously undermines it with his authoritarian actions is also real. We are not reassured that this regime will respect the constitutional provisions on the check-and-balance measures on martial law, as it has now displayed its capacity to abuse this presidential power when Duterte invoked it beyond what is necessary, even as the AFP has repeatedly reassured the public that it is in control and capable of imposing law and order even without martial law.

Definitely we have already seen everything. The day has come when it is our men in uniform, our AFP, our soldiers, who give us the assurance that IHL and human rights are paramount, even as the civilian leadership in the person of Duterte can only guarantee that this martial law will be as harsh as Marcos’s martial law. The tables have turned. It is the AFP that is still interested in democracy, while its commander-in-chief and his political party cannot wait to impose a dictatorship.

What martial law definitely does is curtail civil liberties and, in the process, drive a wedge into the partnership between civil society and the military in their common goal to preserve peace, order and stability. More importantly, it does not help that the President’s model in its imposition is the dictator Marcos’s template, of martial law being harsh, and where, as he recently declared, he does not simply care how many are killed. According to Duterte: “So. be. It,” on the number who might end up dead. Duterte’s martial law will not be harsh on terrorists, but on civilians. It is the wrong option of social control, when what is immediately needed is military efficiency in surgical and precision operations against the terrorists, as what the AFP is now accomplishing in Marawi, while preserving democracy and civilian supremacy.

Without a doubt, there must be decisive action against terrorism in Marawi and the rest of the country. So far, this is what the AFP has displayed even without the implementation of martial law on the ground, after it has recovered from the initial shock of terrorist occupation of an urban center. This is what the AFP has displayed during the month-long Zamboanga City Siege in September of 2013, where the AFP focused on surgical military operations and containment strategies, without infringing on civilian government and civil liberties at the height of a massive urban warfare in one of the most populated centers of Mindanao. This was the AFP as protector of the people at its finest. 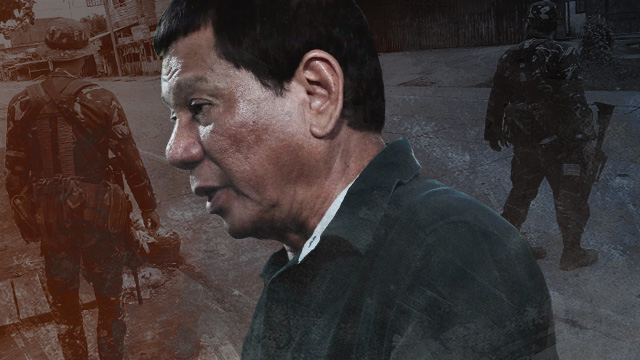 And then we have the martial law in Mindanao, with Duterte’s promise that it will be harsh, will only unravel an AFP at its worst as the oppressor of civilians. This is the logic of military government, and the consequences of giving the military absolute authority over civilians and their elected leaders. There will no longer be a partnership between the people and their soldiers, but only tension and enmity as the protectors gradually evolve into the hated oppressors.

Duterte’s declaration of martial law is not decisive action. It is an authoritarian leader’s preferred response to social problems, as shown by the fact that even without the Marawi siege by the Maute group, Duterte has long professed his desire to declare martial law, with or without the constitutional basis for its imposition. It is his policy for social control without consensus, and PDP-Laban’s declared path towards “peace and development.” There is even no longer pretense in Duterte’s and PDP-Laban’s pronouncement on their preference of martial law as a strategy for political domination and social control. This is creeping authoritarianism espoused by the largest political party in the Philippines, as its leader mulls imposing it on the rest of the country, regardless of any constitutional basis that there exists rebellion beyond what the AFP has been dealing with on a daily basis in the past 30 years.

We have come to this. The party of Ninoy Aquino and Nene Pimentel that launched the first legal and parliamentary opposition against Marcos’s and his Kilusang Bagong Lipunan’s (KBL) martial law is now assuming the mantle of KBL as the dictator wanna-be’s vehicle in pushing for martial law as this regime’s political and social mechanism for authoritarian development. Ninoy Aquino must really be turning in his grave.

This brings us to the very motivation behind Duterte’s and PDP-Laban’s preference for martial law. Martial law is now the ruling party’s strategy for political domination, and its President’s much long-awaited opportunity for absolutism and one-man rule. If Marcos has used communism as the bogeyman, Duterte is now using terrorism, and of course drugs – even straining to establish a link between the two with nothing but his usual anecdotal flare for excruciating drug monologues – to scare the population into accepting the curtailment of their civil liberties and submitting to martial law’s doctrine of social control imposed through the barrel of a gun. A terror threat that can otherwise be competently dealt with militarily by an efficient and motivated AFP, is now being used by Duterte to pit the military against civilians, by letting the military take over the civilian function of governance, thus perpetuating an authoritarian mindset that is only beneficial to his authoritarian designs.

This therefore explains why Duterte is using a sledgehammer to take on a job that is properly accomplished with precision tools. It is the convenient but indiscriminate weapon of an authoritarian leader. Why else declare martial law over the entire island of Mindanao, when the immediate disturbance is limited to a few hectares of a hundred-thousand square kilometer island? Because a leader who despises democracy, dissent, and popular participation in governance will always choose control and domination, rather than preserve civil liberties and democracy, given the excuse that the Marawi incident has presented to him. More than panic response, Duterte’s martial law in Mindanao, which also now threatens Visayas and Luzon, has always been his design for social control and political domination, on his way to absolute dictatorship.

What is new in this crossroads of our history is not the terrorism in Marawi or the Maute insurrection. We have dealt with such incidents in the past, oftentimes successfully given the spirited motivation and support to our armed forces. What is new is this President’s unabashed and unapologetic intention and policy of using martial law to perpetuate an authoritarian rule, regardless of the actual urgency for introducing the extraordinary and polarizing option of asking the military to rule over our daily lives, as martial law already did during the Marcos regime.

Unless we want to live once again in a society run like a military camp, we must resist and oppose Duterte’s desire to coopt the AFP into another authoritarian project. To our friends and colleagues in the AFP: your partners in peace and democracy are the people you swore to protect, not another dictator wanna-be. – Rappler.com