On the front lines of humanitarian work for families fleeing conflict Facebook Twitter Copy URL
Copied
UNHCR places the spotlight on 4 Filipino humanitarian workers on the front lines of protecting families on the run from conflict, violence, and persecution

World Humanitarian Day brings the world together to rally support for people affected by humanitarian crises and pay tribute to aid workers who help them.

As fighting in Marawi City rages on, and as global displacement hits record high, the United Nations High Commissioner for Refugees (UNHCR) places the spotlight on 4 Filipino humanitarian workers on the front lines of protecting families on the run from conflict, violence, and persecution:

Being a humanitarian connects directly to me, as a human being. Perhaps nothing can be more fulfilling than being able to demonstrate compassion to the people we serve. This must have been why I have been a humanitarian worker for nearly two decades now, the last 7 years of which have been with UNHCR, the UN Refugee Agency.

I serve as the Program Officer of the Philippine office, and since the conflict in Marawi broke out nearly 3 months ago, I concurrently headed our satellite office in Iligan City.

Whenever we do Protection Monitoring in evacuation camps in Iligan City and other municipalities neighboring Marawi City, we provide a listening ear to families who have fled the fighting. We capture what they say and elevate their concerns to the proper forum. 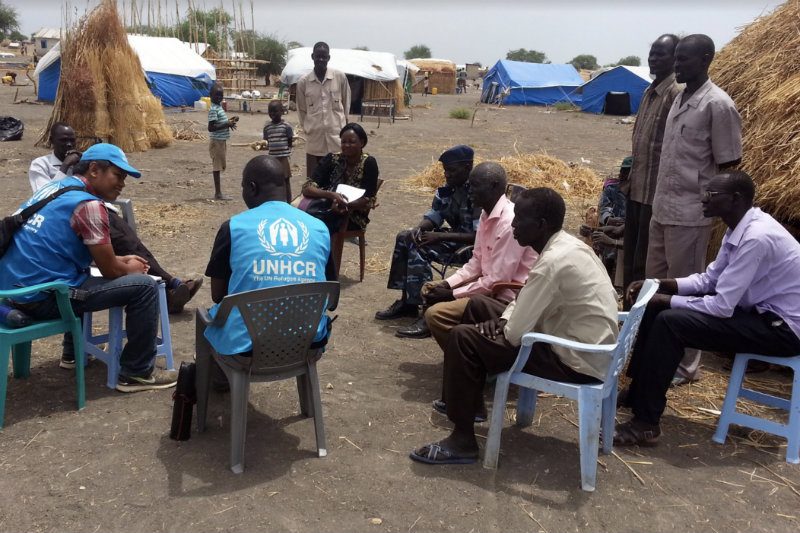 Every day, aid workers put their lives on the line to provide life-saving assistance to underserved families affected by conflict. However, humanitarians worldwide are increasingly being targeted. In 2016, for example, there were attacks against health workers and facilities in 20 conflict-affected countries, resulting in 863 medical personnel being killed or injured.

Another challenge that humanitarians face is accessing people affected by conflict.

At an IDP site in South Sudan, we found this child who was severely malnourished. I coordinated with our health counterparts and when we came back, the child had already died. There are a lot more stories like these because aid workers are unable to move, and move quickly, due to lack of access.

Despite these challenges, being a humanitarian worker brings me contentment and fulfillment that no other job would.

“Whoever saves one life saves the world entire.” This Oscar Schindler quote keeps me going as we humanitarians rise to the challenge of supporting people affected by humanitarian crises. Since fighting erupted in Marawi last May, my typical day revolves around listening to the stories of internally displaced persons (IDPs) and asking about their conditions so we can ensure a targeted response to their needs.

What I find especially fulfilling here is the solidarity built with these displaced families. For them, finding a listening ear is already a big thing. An elderly lady told me, in the Maranao language, “I thank Allah for you because you are able to hear my story.” This came to me as a surprise, because what we consider a minor task is a major thing for them. Talking about their ordeal also serves as a debriefing for them, a step towards recovering from the trauma caused by having to flee violence and armed conflict.

Though I find this job worthwhile and very fulfilling, one thing that makes it tough is that I am a Maranao myself. I am among the hundreds of thousands who have been uprooted from our homes in Marawi City. I live with my family in Iligan, and we are part of the home-based IDP population.

Whenever they (IDPs) tell me their stories, I sometimes realize I am also one of the characters. We sing the same tune and share the same hope that we will be able to return to our homes and live in peace. Serving with UNHCR after Typhoon Yolanda was tough, but this time, it’s tougher because I know the people here and I actually share their plight.

I have never imagined that as a humanitarian worker, I myself would be displaced. But now, I am both an aid worker and an IDP; the responsibility weighs heavily because I represent UNHCR and also my fellow Maranao. During a harsh winter in 2015, I was deployed to Serbia for 3 months to help in the Mediterranean humanitarian crisis.

One of my tasks was to provide refugees with information about their rights as individuals and asylum seekers. This information helps them make informed decision for their families. It also protects them from abuse and exploitation along the route. Extremely vulnerable individuals were prioritized to ensure they get immediate attention and care .

It was difficult seeing people fleeing from war, conflict, persecution every day – seemingly without an end in sight and without clear solution of what will happen to them. It broke my heart to see families, especially women and children, being pushed back because of their nationality.

The most rewarding part of my job is being inspired by people’s resilience, courage, and determination to prevail over their difficulties to provide a dignified life for their families. I also met a Syrian mother who was traveling with her husband and children. She spoke in Arabic but admitted in a hushed voice that they come from the Bedouin tribe and had to keep their identity secret out of fear of discrimination from other refugees. She and her family had UNHCR registration papers showing they are Syrian refugees. She said they were heading to Germany to seek asylum for the future of their children and medical care for her husband. I was totally inspired by her strength and determination to secure the future of her family.

Every day, I encounter many stories from refugees like her. Stories of suffering, persecution, insecurity, war and conflict, and being on the run. And yet hope springs eternal for them; there is always a reason to survive and hope. For more than 6 years now, war has become Syrians’ daily alarm. Being on the run has become their way of life. The only thing they know now is how to flee their homes to escape death. The pain of constantly losing their loved ones and properties, eventually made them forget how to live.

Here in Damascus, I keep an eye in the distribution of core relief items and shelter to support internally displaced families inside Syria. I help keep UNHCR’s sector partners well-informed on available stocks, distribution plans, and their overall achievement to ensure complementarity of efforts.

Understanding the political landscape of a humanitarian response is important. This, I believe, satisfies our ethos as humanitarian workers to be impartial hence balancing first-hand information we gather and making it work for the people that we serve. At the end of the day, any primary data collection initiative should adhere to the Do No Harm principle of humanitarian assistance.

Despite the challenges at work, being a humanitarian is a very fulfilling job and mission. The little impact of my work, both tangible and intangible, makes me alive. After all, this is not for me nor for UNHCR; this is for those families who remain displaced in their makeshift tents waiting for somebody to recognize their plight, alleviate their suffering, restore their hopes, and help them regain their dignity. – Rappler.com

This World Humanitarian Day, UNHCR invites you to share its commitment to provide life-saving aid to displaced families, protect their rights, restore their hopes, and help them rebuild their lives in safety and dignity. Your gift helps UNHCR and its staff across the world empower the families it serves. Support UNHCR’s work here.

Aisah Disoma serves as the Field Associate for Protection at the UNHCR Philippines.

Brenda Escalante served as UNHCR Philippines’ national protection officer for six years before being deployed to South Sudan. She was also briefly assigned to Serbia in 2015.