Oct 10, 2017 11:42 AM PHT
JC Punongbayan
Facebook Twitter Copy URL
Copied
At least one thing is for certain: the decline in President Duterte’s net satisfaction rating is not a fluke, it is evident across all major geographic and social divides across the country

Cracks are beginning to show in President Duterte’s image as a “populist” strongman.

But this is such a conspicuous dip that that even President Noynoy Aquino – who had a much shorter honeymoon period – scored a higher net satisfaction rating during the same time in his presidency. 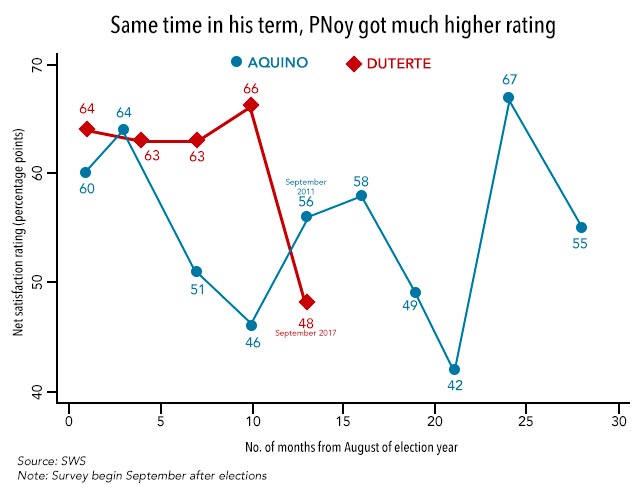 Breaking down the data

What could explain the big September drop in President Duterte’s ratings?

For starters, the latest SWS survey – conducted from September 23 to 27, 2017 – was no doubt influenced by a string of preceding controversies that rocked the nation.

First was the highly-publicized killing of teenagers Kian delos Santos, Carl Arnaiz, and Reynaldo de Guzman in the Philippine National Police’s “One-Time-Big-Time” operations mid-August. Second was the House of Representatives’ unpopular move to slash the Commission on Human Rights’ budget to a paltry P1,000. Third was the “National Day of Protest” where thousands went to the streets on the occasion of the 45th anniversary of Marcos’ martial law declaration.

But more striking than the dip itself is how broad-based it is: the President’s ratings dropped across nearly all regions and socio-economic groups. 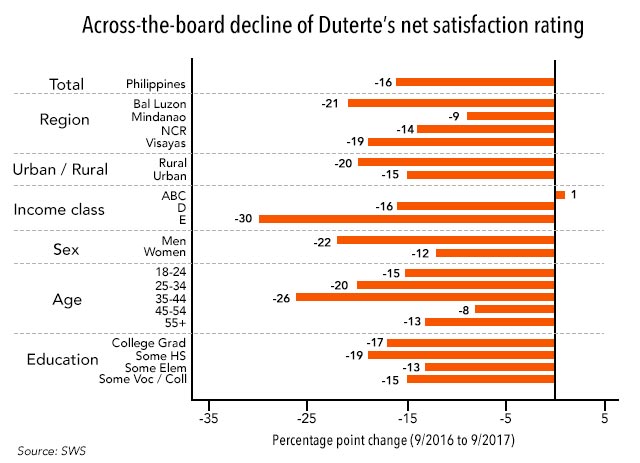 Figure 2. Note: for national percentages, the sampling error margin is ±2.5%; for balance Luzon it’s ±4%; for Metro Manila, Visayas, and Mindanao, it’s ±6% each.

Given the survey’s small sample size, it’s really hard to deduce anything conclusive from these numbers. Still, the patterns are telling.

Yes, even in Mindanao – the President’s stronghold – there was a sizeable decline. This may reflect some degree of dissatisfaction over the protracted Marawi conflict (4 months and counting) or the Mindanao-wide declaration of martial law.

Second, by far the biggest decline in any group came from Class E (30 points). This is unsurprising: it’s common knowledge now that Duterte’s war on drugs is overwhelmingly anti-poor, as corroborated by groups like Amnesty International and Human Rights Watch.

Meanwhile, the sole group that turned up with any positive change from last year is Class ABC (1 point increase). Although not statistically significant, ABC’s failure to register a statistically negative change – in line with the national trend – already speaks volumes. This seeming class divide shakes the notion that President Duterte is serving the interests of the masses more than those of the well-to-do.

Third, more men have been turned off by Duterte than women (22 versus 12 points, respectively). As one friend suggests, this may be partly due to the fact that those killed in the drug war are overwhelmingly males.

Fourth, those aged 35-44 registered the biggest decline (26 points), followed by those aged 25-34 (20 points) and 18-24 (15 points). Note that these groups comprise the working, tech-savvy, and millennial segments of the population. Older people seem harder to sway, but even they registered nontrivial declines.

Fifth, across educational attainment, those with some high school education and college graduates showed the biggest declines (19 and 17 points, respectively).

In all, it’s difficult to deduce from this graph the exact reasons behind the President’s declining popularity. The survey results also say nothing of the impact of recent economic phenomena, like rising inflation, widening deficits, shrinking reserves, and falling investments.

But at least one thing is for certain: the decline in President Duterte’s net satisfaction rating is not a fluke, it is evident across all major geographic and social divides across the country.

In the past – especially when the odds are against them – high-ranking officials of the Duterte government were wont to justify their bad actions and policies by trumpeting very favorable public opinion survey results.

But the latest SWS survey seems to signal the end of that era. Will future surveys continue to unravel the people’s discontent? If so, the Duterte government can no longer hide behind the veil of “excellent” or “very good” ratings, nor can they mask the foul smell of their blunders with fragrant, flowery numbers.

Instead, they must get their act together – and stop their bad policies – lest they soon exhaust their most precious resource, and so far, their only saving grace: the people’s confidence and trust.

It may have taken long, but now it seems that Filipinos are finally waking up, resisting Duterte’s charm, and breaking free from his spell. – Rappler.com