[OPINION] How rich are Filipinos compared to our ASEAN neighbors?

Facebook Twitter Copy URL
Copied
Compared to our ASEAN neighbors, the Philippines has treaded on a deviant growth path. Now, our poorer neighbors are growing faster than us. As we lead this year’s special ASEAN Summit, we might ask ourselves: How can we bolster our shaky standing in the region?

This year we’re hosting the ASEAN Summit for the third time ever, and also on ASEAN’s 50th founding anniversary.

It’s therefore as good a time as any to step back, take stock of our place in the region, and examine how we have progressed compared to our neighbors.

A good way to do this is by comparing average incomes across ASEAN countries, noting that income is one of the best – albeit imperfect – ways to measure and compare people’s well-being.

Figure 1 below compares the GDP (or gross domestic product) per person across all ASEAN member-countries and across time. This graph speaks volumes. 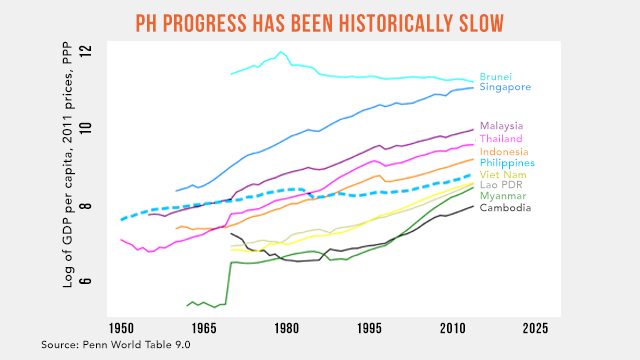 First, while ASEAN countries are generally becoming richer over time, some have advanced faster than others.

The Philippines’ rate of progress, in particular, has been embarrassingly slow. With the exception of Brunei and Singapore, the Philippines used to lead the pack in the 1950s. But Malaysia, Thailand, and Indonesia have long overtaken us: Malaysia in 1968, Thailand in 1984, Indonesia in 1989.

Fast forward to 2014 (when the latest comparable data is available), only the CLMV countries – Cambodia, Lao PDR, Myanmar, and Viet Nam – are poorer than us. But remarkably, their incomes have caught up so fast that they are soon poised to match Filipinos’ income levels (Viet Nam may have even already overtaken us).

For the greater part of the 20th century, Myanmar was indeed the poorest in ASEAN. But by 2014, the average Burmese is richer than the average Cambodian, and is now nearly as rich as the average Vietnamese or Lao.

What explains this remarkable turnaround? The gradual return of democratic institutions and economic openness partly explain Myanmar’s impressive rise from the doldrums. But starting from such a low base also explains much of its recent growth (also called “base effect”).

The Philippines, once the leader in the region, is now the follower. Who’s to blame for the country’s lackluster performance?

Many scholars have looked into this, and one common theme emerging from the corpus of research is this: a combination of external factors and bad domestic policies – compounded by President Marcos’ corrupt and debt-driven leadership – set us up for failure.

In the late 1970s and early 1980s, ASEAN countries faced much the same external shocks that led to economic troubles – oil price hikes from OPEC and a US recession that raised world interest rates and reduced export demand.

But only in the Philippines did these external factors result in a permanently lower income growth trajectory, commencing in the 1983 debt crisis. This recession – the deepest since WWII – is manifested in the dip of income per capita you see around 1983.

Back in the 1960s, however, the income path of the Philippines was already flatter than that of other ASEAN countries, especially Malaysia and Thailand. During this time, our neighbors pursued export-oriented industrialization. But Filipino leaders at the time focused too much on promoting domestic production in what’s called “import substitution industrialization.” In short, this means we boosted local firms’ output and protected them from foreign competition, in the hopes that they would develop their own production capabilities and technologies.

But instead, our industries got used to very high levels of government support and protection and failed to mature vis-à-vis their ASEAN counterparts.

This pattern was largely continued (and exacerbated) during the Marcos regime, whose crony capitalism – characterized by the proliferation of monopolies, special privileges, and damaged institutions – further removed businesses’ incentives to be efficient and productive, leading to the stagnation of manufacturing.

All in all, decades of bad economic policies and politics brought the country down. Using statistical techniques, Manuel Albis and I showed in a previous article that Filipinos could’ve been much richer now had we just followed the growth patterns seen in the rest of ASEAN. (READ: Were it not for Marcos, Filipinos today would have been richer)

Unless the Duterte government implements crucial reforms today – especially in foreign investments – our place in ASEAN will continue to be imperiled.

Investments drive future growth. But the data show that the Philippines’ investment rate has been historically low, owing in no small measure to our similarly low saving rate and the many restrictions that have diminished our attractiveness as an investment destination.

Vietnam is becoming an increasingly important competitor for foreign direct investments (FDI). Members of the South Korean Chamber of Commerce, for example, are reportedly moving to Vietnam because doing business there is around two-thirds less costly than in the Philippines.

A recent survey also revealed that US companies are choosing to expand their businesses mostly in Vietnam, Myanmar, and Indonesia. The Philippines is near the bottom of their priority list (see Figure 2). Our lacking infrastructure is a major investment turnoff. In the latest Global Competitiveness Report, the Philippines lags behind the rest of ASEAN in terms of the quality of roads, railroads, ports, air transport, and electricity supply. (In fact, we scored worst on roads and air transport.)

Aside from infrastructure, investors are also looking closely at prospective growth: they want to invest wherever growth is expected to be faster, not slower.

But the 2017 growth forecasts for the Philippines have been dropping in recent months, and converging toward the low end of the government target (see Figure 3). Among other things, this is on account of the slower-than-expected rollout of “Build, Build, Build.” Compared to our ASEAN neighbors, the Philippines has treaded on a deviant growth path. Now, our poorer neighbors are growing faster than us. As we lead this year’s special ASEAN Summit, we might ask ourselves: How can we bolster our shaky standing in the region?

In a sense, the answers are already staring us in the face: we need to step up our investment and infrastructure game – fast.

Although the Duterte economic managers are working hard on this, they have their work cut out for them. Business confidence is at a 3-year low and 52% of surveyed US businesses thought the current administration is “ineffective” in “boosting business confidence and promoting investment.”

The least we can do now is to do business as usual, and not make matters worse. But if our aim is to regain our economic leadership in the region, it’s clear that this alone will hardly suffice. – Rappler.com