[OPINION] Markets vs Duterte: Where do we draw the line?

Feb 21, 2018 9:55 AM PHT
JC Punongbayan
Facebook Twitter Copy URL
Copied
A lot of Duterte’s market interventions so far seem to stem not from a well-informed or genuine desire to correct so-called 'market failures,' but from an urge to brandish the awesome powers of the state whichever way possible 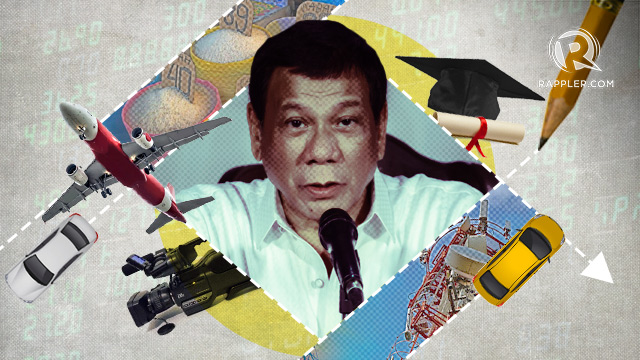 You may not realize it yet, but there is a growing list of markets and economic activities in which President Duterte and his allies want to intervene.

Although markets are generally good in organizing economic activity, they also occasionally “fail” – as in the case of monopolies, congestion, and disinformation.

In such cases, some form of government intervention might be justified. But economists are usually skeptical of this because some sort of failure by government itself is almost always bound to happen.

In this 3-part series we explore Duterte’s market interventions so far, which can be categorized into:

You will see that, no matter how well-intentioned, these policies by Duterte are undeniably heavy-handed and symptomatic of his authoritarian tendencies. In addition, many of them are likely to worsen market outcomes than improve them.

In response to “greedy” traders and the recent shortage of NFA (National Food Authority) rice, agriculture Secretary Manny Piñol boldly said he wanted to “take rice business out of private hands and give it to the government.” He also threatened to file economic sabotage cases against private traders.

He’s forgetting that rice is already heavily controlled by government. By law the NFA has a monopoly on rice importation. In recent decades it has allowed some degree of importation by the private sector, but not exceeding a fixed limit or quota per year.

Economists have long blamed the government quota on rice imports (and NFA’s monopoly status) as the primary reason for our high rice prices and susceptibility to supply shocks.

Proposals to remove this quota (and abolish the NFA altogether) have long been on the table, yet Duterte has failed to act. He even angrily fired an agriculture undersecretary on the (misplaced) assumption that she wanted to allow more rice imports.

This aversion to importation by the private sector is unfortunate: it could reduce rice prices and help temper the impact of the new tax reform law (TRAIN) on inflation.

Thus, contrary to Piñol’s view, it is the government – not the private sector – that is at fault here.

House Speaker Pantaleon Alvarez recently railed against Cebu Pacific over various issues, such as supposedly long queues, flight delays, and a “refusal” to use airport tubes.

Alvarez ordered Cebu Pacific to fix these issues within 45 days and migrate its domestic flights out of NAIA 3, on pain of a canceled congressional franchise.

Over the years Cebu Pacific, along with other airlines, has effectively promoted tourism and democratized air travel with its affordable rates. NAIA 3, despite its shortcomings, is also arguably the best of our airports.

Denying people’s access to both these services will just spell innumerable and needless inconveniences for air travelers. How could such a thought even cross the Speaker’s mind?

This is not the first time this government has attacked specific airlines. Last year Duterte himself threatened Philippine Airlines (PAL) with closure of NAIA Terminal 2 (which PAL uses exclusively) if it failed to pay its multibillion-peso government debts. In the process, Duterte even accused PAL owner Lucio Tan of funding “destabilization” efforts.

Such bullying seems to have worked: last November PAL gave in and paid P6 billion.

Government is also hot on the heels of ride-hailing services Uber and Grab.

Last year, the LTFRB also stopped the processing of new franchise applications, demanded P190 million to lift Uber’s suspension, and made a show of “losing” Uber and Grab’s accreditation papers in their office. Today, lawmakers are pushing a law that would eventually require Uber and Grab to get congressional franchises before operating.

Uber’s algorithms, which allow supply and demand to meet 24/7, are designed to make hailing fast and easy.

But the government’s incessant meddling in their operations – some say to protect vested interests in the taxi industry – has made hailing slow and painful. Waiting times have doubled or tripled in recent months, and vehicles now come from farther afield than before.

Although caps could arguably abate road congestion, chipping away at the convenience of Uber and Grab’s services – at a time when public commuting is arduous (even dangerous) – is nearly a malevolent act.

True malevolence has been manifest in Duterte’s constant threats to media outfits like the Philippine Daily Inquirer, Rappler, and ABS-CBN.

Back in April, he threatened to block the renewal of ABS-CBN’s congressional franchise because of allegedly unaired political ads.

After hurling several accusations – including “economic sabotage” and “swindling” – Duterte also pressured (successfully) the owners of the Inquirer to sell their majority shares to Ramon Ang, Duterte’s friend and major campaign donor.

Most blatant, however, is Duterte’s continuing attack on Rappler. It started in his 2017 SONA and led to the Securities and Exchange Commission’s revocation of Rappler’s registration in January.

Any democracy is founded on a free marketplace of ideas, and this includes a free and independent press. Duterte’s incessant attacks on media outfits is no ordinary attack on business: it is a direct assault on one of the pillars of our democracy.

To break the telecom duopoly between Globe and PLDT-Smart, Duterte himself is aggressively pushing for the entry of a third player, preferably one from China.

He wants operations to start as early as the first quarter of 2018, and even warned the courts not to “interfere” or “prolong” the process.

Although we do need more competition in this sector – to whip the existing duopoly into providing cheaper and faster services – so many questions remain unanswered:

Does the third player really have to be Chinese? How does this fit in Duterte’s overall pivot to China? What threats could a Chinese player pose to our national security? What special interests are at play? Why is Duterte personally rushing this?

Duterte’s threats have also not spared this sector. At no cost to the government, PLDT recently surrendered some of its radio frequencies, which Duterte plans to hand to the incoming third player. But this came after Duterte threatened to send over auditors and look into PLDT’s books.

When a dictator intervenes in markets

Sometimes government does need to intervene in markets (as in encouraging competition in the telecom sector).

But a lot of Duterte’s market interventions so far seem to stem not from a well-informed or genuine desire to correct so-called “market failures,” but from an urge to brandish the awesome powers of the state whichever way possible – even if it means constantly threatening, harassing, or extorting the private sector.

This brand of regulation is deviant and disturbing, but not remotely surprising: it is but symptomatic of Duterte’s nature as a bully and dictator, to which he has already confessed.

But bulldozing the private sector this way could come at the cost of worse market outcomes for our people: rice could be more expensive, air travel more inconvenient, ride-hailing more inaccessible, media less independent, and telecom less secure.

Which firms or sectors will the Duterte government threaten, harass, or extort next? Are they aware of the economic costs of their bully tactics? As the country slides ever deeper into authoritarian rule, where do we draw the line? – Rappler.com

(To be continued. Part 2: Duterte’s penchant for blanket bans.)