Apr 17, 2018 11:00 AM PHT
Marites Dañguilan Vitug
Facebook Twitter Copy URL
Copied
The President pushes for joint development in South China Sea. But China has no similar deal with any country in Southeast Asia where claims overlap 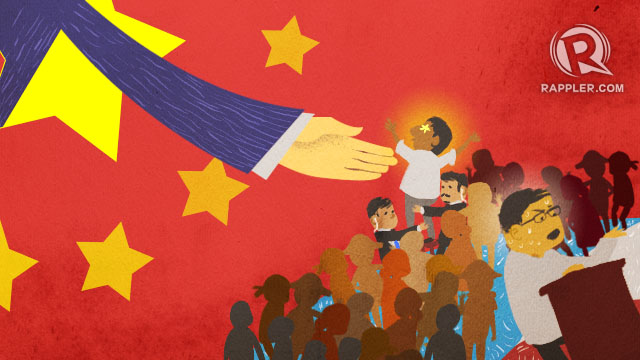 It has been percolating in the President’s mind since last year, this thing about entering into a joint development deal with China in the West Philippine Sea. Like an itch, it needs to be soothed. And what’s the best way to do this? Simply give in to it.

The President’s thoughts on how the country should go about satisfying this uneasy  itch have progressed from foggy to slightly clear. On two major occasions, Rodrigo Duterte has declared his great inclinations: during his second State of the Nation Address (SONA) in July 2017, and in a meeting with Chinese Premier Li Keqiang in November of the same year.

In his rambling SONA, he was vague about details, but said that the issue of the West Philippine Sea had to be tackled “sooner or later.” He gave flesh to this earlier bare-bones statement in a press conference that immediately followed, but was coy about the main personalities involved: “It’s going to be just like a joint venture…. There’s a partner already, I just cannot reveal…. Our representatives and their representatives…are talking and they are exploring.”

When Premier Li visited Manila, he and Duterte issued a statement agreeing to “cooperate with each other…in maritime oil and gas exploration and exploitation.” Asked by reporters if this would mean lifting the moratorium on oil and gas exploration in the South China Sea, Duterte said it was a “possibility” but only if it served the “higher interest” of the country.

The “higher interest” of the country, as the President sees it, is for the Philippines to stay in China’s tight embrace because the global power has the wealth to dispense to boost our economy and fund the government’s “build, build, build” program and the rehabilitation of war-torn Marawi. Nothing could be more explicit than these declarations straight from the President’s lips: “I need China more than anybody else at this time of our national life…. I just simply love Xi Jinping…”

Early this year, the “joint venture” that popped up in his head in 2017 transformed into “co-ownership.” In a speech in February, the President disclosed that China offered joint exploration which is “like co-ownership, it’s like the two of us own that.” It was unclear if he was referring to sovereign rights over the West Philippine Sea or the resources that abound there. Or perhaps both.

Thus, for the first time, Duterte and Chinese President Xi Jinping have given the green light to joint exploration in the South China Sea. This took place in a recent bilateral meeting on the sidelines of the Boao Forum held in Hainan, which Duterte attended.

Malacañang’s Harry Roque has pointed to two joint development agreements, commonly referred to as JDAs, as examples: those of Brunei and Vietnam. His point was: what is stopping the Philippines from venturing into this territory when our neighbors are already deep into it?

But these are different and cannot serve as models for the Philippines. In the case of Brunei, a joint venture between the China National Offshore Oil Corporation or CNOOC and the Brunei National Petroleum Company was focused on providing drilling services to oil and gas companies for offshore exploration.

As for the arrangement between China and Vietnam, this concerns mainly the Gulf of Tonkin, also called the Beibu Gulf, an area where both countries had agreed on maritime boundaries and to manage the fishery resources there. But this did not involve disputed features.

To date, none of the ASEAN claimants has an existing JDA with China in areas where there is an overlap of claims.

What then exactly will be the terms of the Philippines-China deal? These remain murky. Secretary Alan Peter Cayetano said that the foreign affairs and the energy departments have yet to come up with a “legal framework.” Whatever these will be, they should be transparent and subjected to public scrutiny.

Moreover, have the DFA and the DOE studied other models that could apply to the Philippines? If so, what are these? Missing is complete staff work.

Lessons can be learned from the past as well, when the Philippines and China forged the Joint Marine Seismic Undertaking or JMSU that covered the Reed Bank. Vietnam vehemently protested this as it violated an agreement among ASEAN countries to deal with China on South China Sea issues collectively. The JMSU became a tripartite agreement—but a case questioning its constitutionality is still pending in the Supreme Court.

Herein lies the trouble: once the President has set his mind on a course of action, none of his alter egos, none of his advisers, can pose a different option, a contrary view, or a nuanced approach.

This looks like it will be another Boracay-type decision. The decision to shut down the island for 6 months was purely the President’s call. It appears that the men and women in the Cabinet, Duterte’s aides scramble to justify the President’s preference or aim to please him.

As Cayetano said after the Duterte-Xi agreement: “If our legal minds, the DFA, the Department of Energy, Malacañang, and some of our consultants can come up with a framework tomorrow, I will send that to the Chinese tomorrow. If they can send it back to us the next day, and they say they agree, then we can start drafting the MOU or the agreement, and vetting it for official okay.” – Rappler.com