Apr 30, 2018 11:59 AM PHT
Joel Rocamora
Facebook Twitter Copy URL
Copied
What is disgusting about these two is not just that they encourage the worst instincts of people, they themselves are stuck in the mire, the stinky bottom 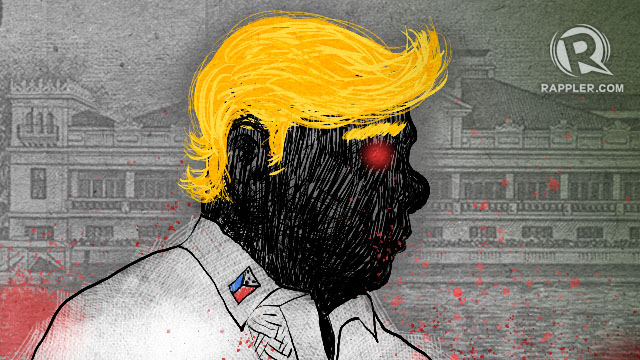 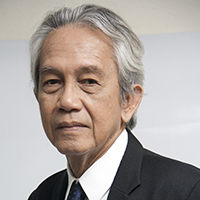 “This president is unethical, and untethered to truth and institutional values…His leadership is transactional, ego driven and about personal loyalty.”

If you thought I was describing Duterte with this quote, you would be wrong but also right. It actually describes Donald Trump in a just released book by former FBI director James Comey. You would also be right because it describes Duterte as well.

Identifying similarities between the Duterte and Trump personalities and regimes should help us understand the uncomfortable spot that Americans and Filipinos find themselves in. Even more useful would be to contrast how resistance has developed in the two countries.

I could write a whole book on Rody Trump. They are uncannily similar in so many ways. I want to focus on their disgusting treatment of women. We could start with Jojo Abinales’ angry eloquence. (READ: Duterte and Trump: Dirty Old Men)

“Sexual reprobates like their women weak and submissive to hide their impending impotence but, more importantly, because they want to conceal what they are terrified of: strong women. They reserve their venom on those women because these women’s ability, intelligence, standing, and grace bring into stark contrast these scalawags’ ignorance, pettiness, narcissism, and their paranoia.”

This is not just a matter of their expletive-laced language. Senator Liela de Lima has been in jail for more than a year on trumped-up charges. Chief Justice Sereno is about to be railroaded out of the Supreme Court. Vice President Leni Robredo and Ombudsman Conchita Carpio Morales have been threatened with impeachment. Senator Risa Hontiveros has two pending cases filed by Duterte minions. The latest victim is Sister Patricia Fox, a frail, 71-year-old ailing nun, jailed overnight on Duterte’s orders.

What Digong and Donald do not understand is that popular beliefs, a country’s culture, is constantly, if unevenly changing. Part of Philippine and American culture is backward, sexist, violent, racist. A president’s responsibility is to represent, to advance, the best elements of a country’s culture, respect for other people and their communities, in the end, decency. What is disgusting about these two is not just that they encourage the worst instincts of people, they themselves are stuck in the mire, the stinky bottom.

In what other ways are Donald and Rody similar? The numbers supporting Digong’s violence do not just come out of his mouth. The numbers blazing out of the barrels of police guns and their hirelings mount to scandalous levels. Donald cannot out-violence Rody. He cannot encourage extrajudicial killings. At best he sends his planes to target Assad in Syria and support the violence of fascist fringe groups in the US.

Fact is, both regimes are weak and incompetent. Both have ramshackle Cabinets with high turnover. Digong makes things worse with his penchant for “shoot from the hip” positions, later revised or explained away, making life extremely difficult for those who have to implement them.

Uncertainty in personnel and policy creates opportunities for corruption. There are more than enough syndicates moving quickly into these spaces. Both have children and in-laws widely rumored to head syndicates.

Digong has already done irreparable damage to painstakingly-built political institutions. Because he and his legal advisers disregard the law, Digong has left our judicial system, starting with the Supreme Court, in shambles. American political institutions have shown more resiliency. Trump has had great difficulty with the Department of Justice (DOJ). The Special Prosecutor appointed by the DOJ might still succeed in laying the groundwork for Trump’s impeachment.

Opposition to Trump has gone much further than opposition here. This is not just because American political institutions provide a stronger base for resistance. In the Philippines, only the Senate has provided an institutional base for opposition. The party-based opposition, led by the LP and Akbayan, is still in its initial stages. I am envious of the dynamism and energy of the women’s movement, striking public school teachers, and amazingly, teenage-led mass movements in the US. Anti-Duterte mobilizations have been sporadic and do not yet have the momentum of the American resistance.

Trump may be closer to being removed than Duterte. The mid-term elections in the US in November will surely turn Trump into a lame duck president. We will have to wait till May 2019.

Instead of the possible opposition majorities in both the House and the Senate in the US, the best we can hope for is a stronger opposition minority in the Senate. We need to support the groups building up opposition to these two.

In the meantime, we need to suck it up, limit the nausea our “leaders” provoke. – Rappler.com