[OPINION] To escape poverty, hard work is not enough 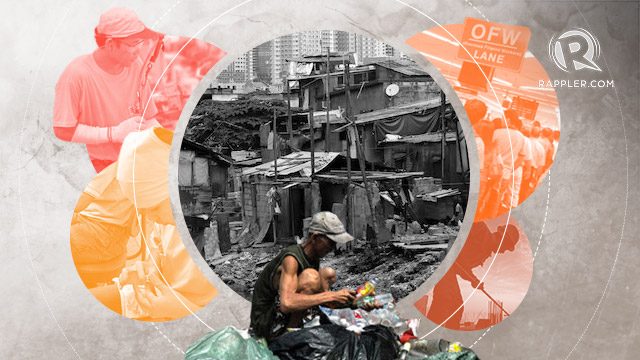 Facebook Twitter Copy URL
Copied
Diokno’s recent statement, for the record, is a gross misrepresentation of economists' contemporary thinking about the nature of poverty and income mobility

On Wednesday, Budget Secretary Ben Diokno made a very controversial claim when asked about the prospects faced by OFWs in Kuwait once they come home to the Philippines:

As a student of economics I find it particularly objectionable on 3 counts.

First, not only does it give economists a bad rap by being callous and patronizing, it also misrepresents economists’ current thinking about the nature of poverty and income mobility.

Second, it hides the fact that the labor situation in the Philippines is not as rosy as what the government claims.

Third, it neglects the fact that the Duterte government itself is the promulgator of policies that bring down the poor and the working class, rather than improve their plight.

Economists have long been unfortunately stereotyped as cold, unfeeling number crunchers often out of touch with reality.

But rather than debunk the perception, some top officials in government only further cement such notions in the public’s mind. For instance, another economist in Duterte’s Cabinet was previously quoted as saying that drug-related killings are a “necessary evil.”

Diokno’s recent statement, for the record, is a gross misrepresentation of economists’ contemporary thinking about the nature of poverty and “income mobility” or people’s ability to move from low to high income groups. There’s definitely more to beating poverty and hunger than just hard work.

To illustrate, let me share some findings of a recent World Bank study.

First, although Filipinos are becoming more and more productive over time, their wages (once you remove the effect of inflation or the rise of prices) have not kept pace. This disconnect between productivity and wages – which defies the trends seen in neighboring ASEAN countries – is a puzzle that has long baffled economists.

Second, contrary to common belief, data show that the poor are seldom unemployed: they cannot afford to be jobless for too long. It is the middle-class (like new college graduates holding off work to get their desired jobs) who are more likely to have no work at any point in time.

Third, although the poor have jobs, they also express greater willingness to work more hours. Chronic underemployment – decreasing but still one of the highest in Southeast Asia – suggests that the poor cannot work more hours even if they wanted to.

Fourth, although education could serve as the “great equalizer” in Philippine society, studies suggest that performance in school is often a function of (and correlated with) one’s family income and socioeconomic background. This is true even in some of our elite public high schools and universities.

Granted there are more things we need to learn about the nature of income mobility in the Philippines. For example, we should be able to say which percent of poor Filipino children stay poor (or become rich) once they are adults. But, alas, economists often cannot freely explore these issues due to severe data constraints.

Nevertheless, the available evidence is enough for any self-respecting economist to avoid the simplistic argument that hard work is enough to escape hunger and poverty.

Diokno made his statement in line with Duterte’s appeal for OFWs to come back home, following the diplomatic row with Kuwait. Duterte appealed to OFWs’ “sense of patriotism” and boasted, “Marami nang trabaho sa Pilipinas (there are now many jobs in the Philippines).”

But latest data show that the labor market is not as rosy as Diokno or Duterte would have it.

Given the tight job market, government officials are therefore being disingenuous when they say it’s perfectly okay to go back home now.

Is it possible Diokno is misreading labor market figures?

Back in 2015, he was called out by a fellow economist at UP when Diokno wrote in a BusinessWorld column that, in 2010, “there were some 7.3 million unemployed…and 18.8 million underemployed” Filipinos.

In fact, the statistics referred to a 7.3% unemployment rate and an 18.8% underemployment rate. For some reason, “percent” became “millions.” (READ: Dear Ben…)

Diokno later published a reply saying: “I have no excuse for the obvious misreading of some labor numbers. However, my commentaries are intact.”

Finally, Diokno’s remark omitted the fact that the government has not been exactly pro-worker of late, despite Duterte’s promises and pronouncements.

In the wake of the 6-month Boracay shutdown, for instance, government had no problem decimating the livelihood and incomes of as many as 36,000 people. Until now, no proper plan has been laid down to justify such a policy or compensate Boracay’s residents for the damage he wrought.

Palliatives to help the affected workers include tapping into the national calamity fund, providing emergency loans from the SSS, and repurposing the Pantawid Pamilya program from conditional to unconditional cash transfers. But these are insufficient, ill-thought, or both.

On Labor Day, Duterte also greatly disappointed workers far and wide by failing to double down on his campaign promise to put an end to abusive forms of contractualization.

But not every OFW is a welder or electrician or engineer who will automatically fit the bill. In fact plant and machine operators and assemblers comprised only 13.7% of OFWs as of 2017. Around a third of our OFWs remain employed in “elementary occupations” like domestic help.

In addition, “Build, Build, Build” has experienced such great delays that the jobs being promised might not immediately absorb returning OFWs.

Based on his campaign as candidate and rhetoric as president, you’d think that Duterte loves OFWs. Indeed, some of Duterte’s most avid and fervent supporters today are OFWs.

But, as illustrated by bungled “rescue missions” of domestic workers in Kuwait that led to the expulsion of our ambassador, perhaps it’s time to rethink if President Duterte really has the interests of OFWs at heart.

Now, government is imploring OFWs to return home despite net job losses in 2017, the lack of any coherent plan for their employment and security of tenure, and with veiled assurances that they won’t go hungry as long as they work hard enough.

But our OFWs left the country in the hope of achieving so much more than not being hungry: they seek larger incomes abroad not just for their families to survive, but to thrive and enjoy much higher standards of living than what they currently have.

Some economists in government will do well to check their privilege from time to time. – Rappler.com