[OPINION] Is the Philippine economy really ‘in the doldrums’? 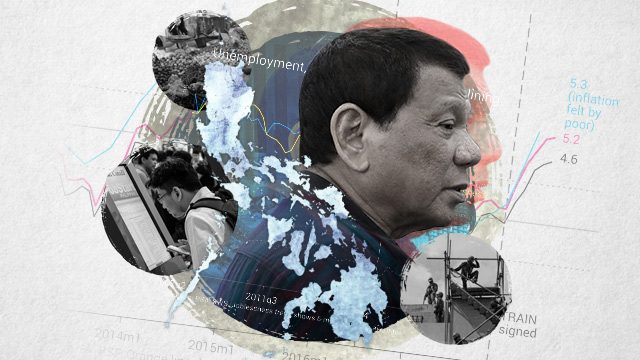 Facebook Twitter Copy URL
Copied
The economy is far from stagnant. What's alarming is President Duterte's apparent cluelessness about the signs of trouble and the need to chart a steady course. Two years into the Duterte presidency, how is the Philippine economy faring?

On June 24, barely a month before his third State of the Nation Address, President Duterte offered this rare and grim diagnosis: “Now, the economy is in the doldrums.”

He based this on rising interest rates, the weak peso, and the slow start of projects in the regions. He also lamented a perceived slump of economic activity in the provinces, to which he said the antidote might be jueteng (an illegal numbers game).

First, although the economy is not “in the doldrums” per se, there are red flags that could turn into real trouble if not addressed soon by the Duterte government.

Aside from being painful to watch, such economic illiteracy could lead to policies that threaten the incomes and livelihood of many Filipinos. Indeed, we’ve already had a sampling of such policies in the past two years.

Not in the doldrums

When you say something is “in the doldrums”, you mean it’s in a state of “inactivity, stagnation, or slump.”

But the Philippine economy is far from being inactive, stagnant, or in a slump.

As of the first quarter of 2018 we grew at 6.8% (see Figure 1). Although below the economic managers’ stated target of 7% to 8%, this is still one of the fastest growth rates in Asia-Pacific. Duterte made his “doldrums” comment more in reference to a supposed slump of economic activity in the provinces.

He said, “In Manila, they’re starting the megaprojects well. I supposed that they would be doing it on time. But in the provinces, it’s a doldrums thing.”

But Figure 2 shows that the regional economies are, in fact, doing pretty well.

Last year, 8 of the country’s 17 regions grew faster (or at least not slower) than the country in general.

Even Davao Region grew at an impressive 11% vis-à-vis the country’s overall growth of just 6.7%. Robust economic growth is also manifest in the jobs figures.

Although the country shed around 663,000 jobs in 2017 – mostly in agriculture – unemployment and underemployment have continued their long-run decline, clocking in at 5.5% and 17%, respectively, in April 2018 (Figure 4). So, all in all, the economy is not “in the doldrums” as Duterte puts it.

But be under no illusion: signs of brewing economic trouble are obvious if we look at other indicators.

Prices have accelerated in recent months. May’s 4.6% is the highest in 5 years, and is already 53% above the 3% inflation target of the Bangko Sentral ng Pilipinas or BSP (see Figure 5).

Lest Duterte forgets, his government is partly to blame for this inflation spike.

Although higher world oil prices explain most of it, the Duterte government is also responsible via TRAIN (the new tax reform law and the profiteering it inspired) as well as the rise of commercial rice prices (owing to mismanagement of the NFA). But note that the BSP raised its key interest rate twice in the past few months precisely to temper inflation, which was partly due to TRAIN.

Duterte also took a stab at economic theory, saying when “you raise your [interest rate], our [peso value] goes down, theoretically.”

But here, Duterte again gets it wrong: basic economics tells us exactly the opposite happens.

Higher interest rates spur capital inflows, and as investors haul their money into the country they exchange their dollars for pesos. This extra supply of dollars raises the relative value of the peso, thus strengthening (not weakening) our currency.

By the admission of Duterte’s economic managers, the weak peso is largely because of the growing trade deficit, in turn spurred by the colossal imports of Build, Build, Build.

In other words, the weak peso signals that we’re increasingly borrowing from the rest of the world to pay for Duterte’s flagship economic project.

Aside from helping weaken the peso, there’s reason to believe that Build, Build, Build will also exacerbate inflation – just like TRAIN – as it induces additional demand throughout the economy.

Some analysts have already warned that the Philippine economy might be on the brink of “overheating”.

All in all, accelerating prices, higher interest rates, and the weak peso, can all be traced – albeit indirectly – to Duterte’s major policies like TRAIN and Build, Build, Build.

Even so, Duterte seems blissfully (and dangerously) unaware of how his own policies affect the economy at large.

Aside from not understanding economic goings-on, Duterte also harbors an incoherent and nonsensical plan to boost regional development.

To promote economic activity in the provinces, the first solution that comes to Duterte’s mind is to retain jueteng. “Now if there’s jueteng…at least money goes around. Some people will get hungry, others will be able to eat, [but] there’s commercial activity.”

Aside from being illegal and nontaxable, jueteng is hardly the prime mover of economic activity in the provinces, no matter how big an industry it may seem. Even if you replace it with an alternative (legal) game, for the most part the Philippine economy still does not run on such games.

While cleaning up the mess made by this unusual policy recommendation, the Palace also jumped on this opportunity to pitch federalism (via charter change) as another way to boost regional development. Presidential Spokesperson Harry Roque said that federalism will “really provide the solution to the uneven distribution of growth.”

The avowed goal of Duterte’s federalism is to dethrone “Imperial Manila” once and for all and democratize economic growth nationwide.

Indeed, many regions are being left behind. But a federal form of government is no guarantee of greater prosperity for Filipinos in the provinces. Done improperly, federalism might even worsen rather than abate existing regional inequalities.

For one thing, data suggest that a vast majority of regions are not ready to be fiscally independent. Figure 6 shows that richer regions also tend to be more economically self-reliant.

This is crucial because, absent a strategic sharing of resources, new federal states with small tax bases (like present day ARMM or Eastern Samar) might find themselves depending on dole outs from other, richer states. Economists have long argued that poorer regions can enjoy more finances even without a radical shift to a federal form of government. Many businessmen are also wary that such a tectonic political and economic shift could entail more costs than benefits.

All in all, the problem of regional development is so complex that to suggest jueteng or federalism as cure-alls betrays not just Duterte’s incurably parochial mindset but also his glaring economic illiteracy.

Where are we headed?

In a way, we’ve always known that Duterte is economically illiterate. But as he enters his third year in office, things cannot go on like this.

A profound cluelessness about how the economy works is as threatening and perilous as Duterte’s authoritarian tendencies and deep-seated misogyny.

Already, Duterte has shown his capacity to concoct and implement such pernicious policies as the ill-thought Boracay shutdown, the mismanagement of the NFA, and the unsustainable rise of SSS pension benefits.

How many more bad economic policies will Duterte spawn in the next 4 years, and can we withstand them?

The phrase “in the doldrums” originally referred to a region of calm winds near the equator that slowed down passing ships.

If we think of the Philippine economy as a ship, we’re not yet slowed down by the doldrums.

Yet we may have a bigger problem at hand: from a distance, it seems that our captain is terribly drunk or fast asleep. Either way, he’s clueless where we’re headed and incapable of charting a steady course for our economy in the next 4 years or so.

Is it any wonder that more and more passengers of this ship are getting worried? – Rappler.com