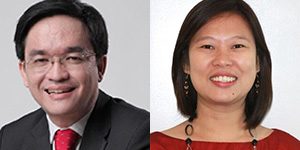 Since 2011, the government, through the Department of Social Welfare and Development (DSWD), has implemented the SocPen (Social Pension) Program, which gives a noncontributory monthly pension of P500 to qualified seniors, i.e., indigent Filipinos aged 60 years and above.

SocPen was established to help fulfill objectives of the “Expanded Senior Citizens Act of 2010”, which legislates privileges and discounts to senior citizens. DSWD runs the program in partnership with the City/Municipal Social Welfare Development Offices (C/MSWDOs) and the Office of Senior Citizens Affairs (OSCA), both under the LGUs.

Who are the ‘indigent’ seniors? Why do they need the SocPen?

Based on official surveys of the Philippine Statistics Authority (PSA), senior citizens are not necessarily poorer than the average Filipino (Figure 1). Many elderly may not be poor because they live with relatives who are able to support their needs. Those who have planned their retirement well, reap the fruits from their productive years. But these sources of income and support face volatilities that are hard for seniors to address.

Figure 1. Poverty by age group in 2015 (% of respective population) Aggregate figures also hide vulnerabilities of certain groups of elderly. In their 2017 report the Coalition of Services of the Elderly (COSE) and HelpAge International suggest that poverty estimates among seniors may be understated depending on assumptions for poverty measurement.

Official poverty rates are not adjusted by age-appropriate basic needs. Health expenses of seniors (and children) are generally more costly, for instance. Thus, several stakeholders of the elderly urge government to work toward more social protection for senior citizens who have devoted a lifetime of work and care for their respective families, as well as for their contribution to the current good health of the national finances, beyond those also provided in the Expanded Seniors Citizens Act.

With the growing attention to resilience-building and social protection, government additionally put premium into assisting indigent seniors. The Philippines committed to the Sustainable Development Goals which have a guiding principle of leaving no one behind.

The Philippine Development Plan (PDP) of 2010-2016 and the current PDP for 2017-2022 both give emphasis on social protection as a means to building resilience to withstand harms posed by risks to welfare. Balancing the need for social protection and fiscal constrains, the SocPen provides targeted assistance to economically deprived seniors.

In 2011, SocPen provided assistance to 150,000 poor seniors who are 77 years old and above. The program expanded gradually with coverage remaining below half a million until 2014. After 2014, it grew rapidly by lowering age eligibility. Program budget jumped during these years (Figure 2). In 2018, SocPen was given a budget of P19 billion for its regular stipend to cover 3 million indigent seniors. 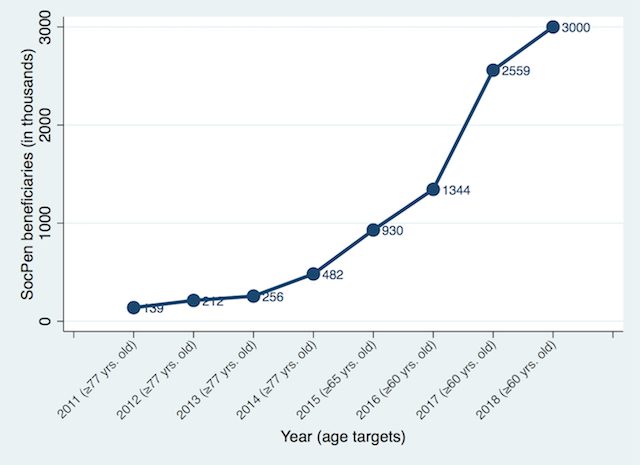 Prior to SocPen, the pension system covered only those who had been formally employed either in government or the private sector. As of 2013, coverage to both the Social Security System (SSS) and the Government Service Insurance System (GSIS) has only been at less than a third of the labor force as of 2013. Only a quarter of those employed actively contribute to SSS, another 3.4% contribute to the GSIS. As a result, only 17.5% of senior citizens benefit from old age pensions of SSS and GSIS.

Introduction of SocPen doubled pension’s reach. In 2016, the 19% of elderly Filipinos covered by GSIS or SSS was topped up by about 17% of seniors under SocPen (Figure 3). The SocPen thus helps to close the pension coverage gap among elderly Filipinos. Additionally, SocPen has done so with a poverty focus. SocPen has done so by prioritizing and exhausting the list of poor seniors in Listahanan, the government’s targeting database of poor Filipinos, in its first years of implementation and until 2014. SSS and GSIS were unintentionally designed to provide pension to the indigents. Besides the SocPen having quietly increased in the last 3 years beyond public notice and its budget ballooning over this period, the SocPen beneficiaries are also among the priority beneficiaries of the government subsidies for lower-income families under the recent tax reform law.

The increase in cash assistance for poor seniors is a welcome development, especially since it cushions the impact of higher prices on seniors’ daily cost of living. But this rapid increase in investment needs proper safeguarding. In particular, more attention is needed to ensure SocPen’s poverty-focus and protection objectives are maintained. The stipend is inadequate and becoming irrelevant

Pensioners recognize the current stipend is helpful but find it inadequate. SocPen cash assistance – when received in full, is unable to fully cover average food and out-of-pocket health expenses of a senior household member, according to PSA surveys. Further, the relevance of the stipend diminishes over time if cash grants do not keep pace with inflation.

Payment delays further undermine the overall objective of SocPen’s social protection role. While the program is supposed to deliver quarterly stipends to beneficiaries, this is not always strictly enforced. Pensioners receive stipends either through direct payments from DSWD disbursement officers, fund transfer to local government units or LGUs, or door-to-door delivery partners contracted by DSWD.

Delays happen mostly because of unavailability of appropriate DSWD disbursement officers who normally handle other programs of DSWD. In places where funds are given to LGUs to distribute, there are also problems of liquidation that delay subsequent payment of stipends. Further, there are problems with door-to-door payment partners as some reportedly charge fees to beneficiaries.

Direct payments are not without operational issues. Some beneficiaries cannot attend direct payment pay-out sessions because of their physical condition or accessibility of pay-out venues. With DSWD field staff having limited human resources especially disbursing officers to address these issues, the DSWD has however worked out door-to-door delivery.

DSWD needs to explore more efficient and less costly payment modes for SocPen as well as for its other cash assistance programs. An internal evaluation by the DSWD (2012) of the SocPen suggested that while 4 out of 5 beneficiaries are satisfied with their experience during cash payouts, many prefer other means of payment.

Inefficiencies in payouts are not solely the fault of DSWD, but also the responsibility of the Landbank, which is also part of the mechanism to pay beneficiaries of Pantawid and the government subsidies under the tax reform law. This can be addressed by engaging other banks that have a better presence on the ground or by electronic means that can be easily tracked and facilitative of liquidation. Recognizing that Listahanan is an incomplete list of the poor, the DSWD allowed “on-demand” applicants into SocPen in cases where an applicant is not in Listahanan. Further in 2014, the DSWD relaxed beneficiaries to those identified as “indigent” by OSCA and C/MSWDO, in addition to those identified in Listahanan. This effectively moved responsibility of identifying SocPen beneficiaries from DSWD to the LGUs.

This also means that Listahanan is no longer used as sole basis for identifying indigent elderly and the SocPen beneficiary registry is now delinked from Listahanan. While flexibility for adding beneficiaries is important since not all poor households may have been recorded in Listahanan (e.g., elderly indigents living alone, abandoned, neglected or homeless), but without specific and transparent guidelines on how LGUs should screen eligible beneficiaries consistently, this leaves too much discretion in the hands of LGU staff and room for potential political patronage. This loose arrangement weakens the poverty focus of SocPen and its ability to achieve the main objective of extending protection mainly to indigent seniors.

Extending pension coverage in the Philippines is an impending priority. While the Philippines remains to be a relatively young country compared to other countries especially in ASEAN, and old age dependency rates is less severe, the country is facing the impending challenge of an aging population.

All others remaining the same, including SSS and GSIS covering only mostly those in the formal sector, the SocPen will increasingly play a role is assisting those outside. Key design and operational concerns on the SocPen mentioned above need to be addressed soon before the program expands even further. – Rappler.com

Note: This Rappler article is a condensed version of a World Bank Social Protection Policy Note.

Dr Jose Ramon “Toots” Albert is a professional statistician and policy researcher who holds a PhD in Statistics from the State University of New York at Stony Brook. He is a Senior Research Fellow of the government’s think tank Philippine Institute for Development Studies (PIDS). Rashiel B. Velarde is an Economist in the Social Protection & Jobs Global Practice of the World Bank Group in the Philippines Country Office. She is part of the team that helped design, and now monitor, the Philippines conditional cash transfer program.