[OPINION] Time for a different narrative on maritime dispute with China

Jul 6, 2018 9:00 AM PHT
Marites Dañguilan Vitug
Facebook Twitter Copy URL
Copied
Since the stunning victory over China in 2016, the official story has been defeatist 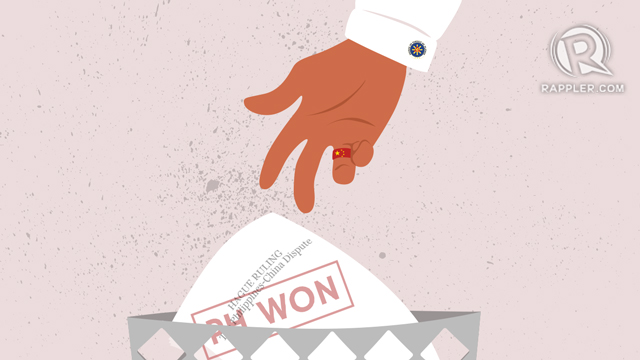 Soon, it will be two years since the Philippines overwhelmingly won in its maritime dispute against China. But during this time, the official narrative in the Philippines has been one with strong defeatist tones.

From Day 1, July 12, 2016, when the international arbitral tribunal issued its decision invalidating China’s 9-dash line and clarifying the status of certain features in the South China Sea, this ruling has never been given the national attention it deserved. It has not been used as leverage in the country’s dealings with China. It has not been in the Department of Foreign Affairs’ talking points.

It has not been part of the country’s diplomatic arsenal.

Yes, we won, officials say, but…

These buts drown out the gains of July 12, 2016, weakening the Philippine position, making our country’s voice part of the chorus of approval of China in the region.

Let us not be taken by the official story. It’s time to talk about a different narrative.

Let’s go back to the story of Philippines vs. China, the historic arbitration case that reverberated in various parts of the world. As a law professor from the University of Geneva said, “July 12, 2016 is a date that will remain etched in the history of international adjudication.”

Let’s go back to the almost two decades of back-and-forth with Beijing when our diplomats asserted Philippine rights over parts of the South China Sea – only to be rebuffed with its stock response that China had “indisputable sovereignty” over this vast area.

Let’s hear from our scholars, experts, and diplomats on how to make use of our legal victory and start a national conversation on this crucial issue.

In my new book, Rock Solid: How the Philippines won its maritime case against China, I tell the story of this victory that gave the country so much – a maritime area larger than the total land area of the Philippines, rich in resources – but has since been disregarded by the government.

First of all, the case is historic. It is the first to interpret the United Nations Convention on the Law of the Sea (Unclos) definitions of rocks, islands, and low-tide elevations; the first case to be filed by a South China Sea claimant state against China; and it is the first case to address the scope and application of the Unclos provision on protection and preservation of the environment.

This book addresses why President Benigno Aquino III took China to Court. Among others, he particularly remembered the quip of one ASEAN senior leader: “There are big countries and there are small countries. That’s the way of the world.” He mulled over this and thought that it was precisely the law that would serve as the great equalizer.

With this as anchor – the law as the great equalizer – Aquino decided, with the approval of the Cabinet, the leaders of Congress and two past presidents, to sue China.

In January 2013, the Philippines began its legal battle. It filed a “notification of statement and claim.”

More than year later, the Philippines submitted its memorial, like a plea, which reached more than 3,000 pages. It was a product of massive research in history, international law, geology, hydrography, marine biodiversity, and cartography. This included 10 volumes of annexes, which contained maps, nautical charts, expert reports, witnesses’ affidavits, historical records, and official communications.

Almost two decades of written exchanges between the Philippines and China, including notes verbale, were made public. Intelligence reports of the Navy, the Western Command of the Armed Forces, and the Department of National Defense were also submitted to the tribunal.

This was a first in the country: that diplomatic cables and intelligence documents were revealed to the public, a fascinating trove of our diplomatic history.

The Philippine story also unfolds in the transcripts of the oral hearings in The Hague which capture the essential points of the case. Paul Reichler and his team at Foley Hoag used the richly-documented diplomatic history of the Philippines-China dispute in their arguments before the tribunal.

These transcripts, the Philippine memorial, the awards (or the tribunal’s decisions) on jurisdiction and merit are accessible reading to non-lawyers like me. They can be downloaded from the website of the Permanent Court of Arbitration.

Despite the stunning victory, why was the Philippines so glum about a historic ruling that was on its side? Why did it choose to bury a euphoric moment instead of using the victory to galvanize a nation?

The answer lay in the country’s new president, Rodrigo Duterte. He held a different view: his heart and mind were with China.

The Duterte government has taken a defeatist stance despite the immensity of what the Philippines had gained from the ruling. Duterte once said that the Philippines was “helpless” in the face of China’s might. For him, the choices in dealing with China were extreme, either to talk or to go to war. He has framed foreign policy in a false dichotomy.

While the story of Philippines vs. China offers hope and inspiration, it is the aftermath that offers more challenges. Rock Solid gives a few prescriptions on how to make the tribunal’s decision work, but there are definitely more ideas out there worth exploring.

Many have said that international pressure can encourage the implementation of the award – but friendly countries have to take the lead from the Philippines.

In the region, the award benefited not only the Philippines but other Southeast Asian states which have made claims to parts of the South China Sea. It was clear from the ruling, as Reichler explained, that “if China’s nine-dash line is invalid as to the Philippines, it is equally invalid to other states bordering the South China Sea like Indonesia, Malaysia, and Vietnam, and the rest of the international community.”

Making the tribunal ruling work and seeing it come to fruition, partly or fully, will take a long time, way beyond a single president’s term. It will require strategic thinking anchored on a strong sense of justice, equity, and sovereign rights. – Rappler.com