[OPINION] Why inflation is actually at a 9-year high 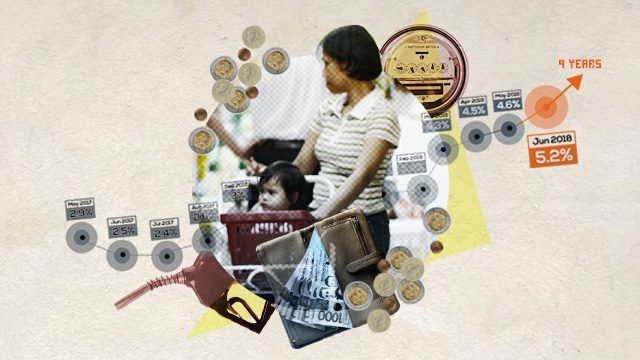 Facebook Twitter Copy URL
Copied
The BSP expects inflation to settle in at 4.6% this year, above its 4% upper target. This means we can expect inflation to further increase till the third quarter of 2018 before it subsides. There’s more to the latest inflation figures than meets the eye.

Last week we were greeted by the unwelcome news that inflation – which measures how fast prices are rising – reached 5.2% in June. Not only is it the highest in 5 years, it is also past most people’s expectations.

But in this article I explain that inflation is actually at a 9-year high and government, despite the reassurances of the economic managers, is less able to act on it than most people realize.

First of all, from a certain point of view, inflation is really at its highest in 9 years, not 5. But how?

For many years the Philippine Statistics Authority (PSA) has been using 2006 as the “base year” (or reference year) to compute inflation. This means that all prices in the economy used to be pegged at 100 in 2006. Yearly changes in prices are measured using this benchmark.

The orange trend in Figure 1 shows that, as of June, inflation using the old 2006 base year clocked in at 5.7% – the highest in over 9 years.

The 5.2% figure we hear in the media is actually the inflation figure using the PSA’s new 2012 base year, which they started using only in March. 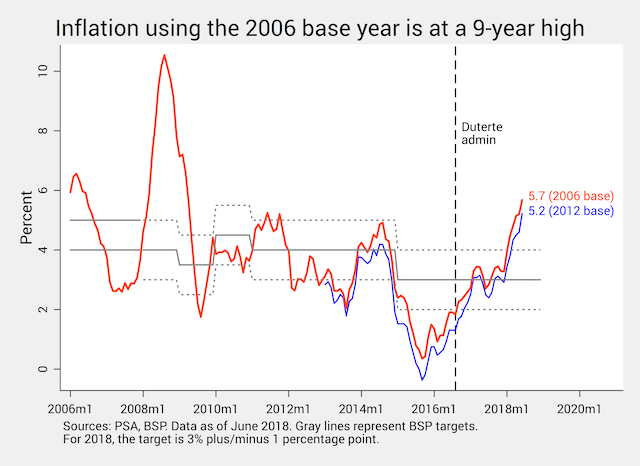 Luckily for the economic managers, this so-called “rebasing” caused all official inflation figures to go down (the blue line versus orange line).

Some people interpret this as cheating: all of a sudden, the inflation series shifted downward. But this rebasing is actually standard practice every 6 years to account for changes in people’s consumption habits.

The usefulness of the old base year 2006, however, is that it allows us a more accurate comparison of inflation today versus in the past.

Sadly, June is the last month that the PSA will report inflation data using 2006 as base year. Starting July they will use only the 2012 base year.

Beyond target and expectations

In a sense, it doesn’t really matter which base year we use: inflation today is doubtless above and beyond the target and expectations of government agencies.

First, inflation has exceeded the target of the Bangko Sentral ng Pilipinas (BSP), whose main macroeconomic policy is to manage inflation.

Second, inflation in June has also gone beyond the expectations of the economic managers, who already proclaimed last month that inflation was “decelerating.” The DOF thought the June figure would only be at 4.9%; the BSP thought it would not exceed 5.1%.

In spite of their mistaken forecasts, government officials have taken turns downplaying the surprise inflation spike.

One of the feeblest attempts was by Presidential Spokesperson Harry Roque, who said inflation was still “within historical amounts” and “not something to worry about.”

First, I’m not sure what Roque meant when he said inflation is “within historical amounts.” Back in President Ferdinand Marcos’ time, amid the country’s deepest postwar recession, inflation reached a whopping 50%. Is anything below 50% okay?

Second, even if some amount of inflation is to be expected from a fast-growing economy like ours, inflation is still in excess of the target set by the BSP. Does Roque know more about inflation targeting than the BSP?

Third, by far the biggest factor behind inflation were food and non-alcoholic beverages, followed by utilities and transportation. Education items – whose inflation rate were just 4% – had but a small contribution, contrary to Roque’s claim.

Will interest rates do the trick?

To combat inflation, the BSP already raised its key interest rate twice – in May and June. Some believe the BSP will raise it again in August.

But such interest rate hikes could be less effective than many – like Senator Tito Sotto – presume.

First, even if we raise interest rates now, monetary policy usually operates with a lag: its impact may not be apparent until many months later.

Second, if recent inflation is due more to supply factors (like expensive oil and a weak peso) rather than demand factors (like weak spending), then higher interest rates – meant to nudge people into more saving and less consumption – could have but a limited impact on prices.

As I explained before, international factors are largely to blame. If world oil production picks up in the coming months, we can expect petroleum prices to go down and inflation to follow.

Third, some say that the BSP is already “behind the curve” and raised its interest rates too late.

The US Federal Reserve, which has been raising its own key interest rate since 2016, is therefore in a better position to attract investments than the Philippines, which has raised its interest rate only recently.

Hence, some sectors claim that had the BSP acted earlier it would have staved off inflation more effectively.

Fourth, the BSP’s recent decisions to raise its interest rates and cut the reserve requirements of banks are confusing and contradictory. While the first tends to tighten money supply, the second tends to loosen it.

Unknown to many (including most media outfits), these two policies of the BSP have sent mixed signals that have baffled the private sector.

Other government agencies, meanwhile, are mulling other solutions. These include “tariffying” rice, raising cash transfers to the poor, and even abolishing TRAIN (or at least its new excise taxes on petroleum).

Indeed, rice tariffication – or the conversion of rice import quotas into their equivalent tariffs – could temper inflation, particularly rice inflation which tends to hurt the poor the most.

Figure 2 shows that, amid the depletion of NFA rice stocks, the poor are forced to buy commercial rice varieties whose prices have picked up recently and also reached multi-year highs. 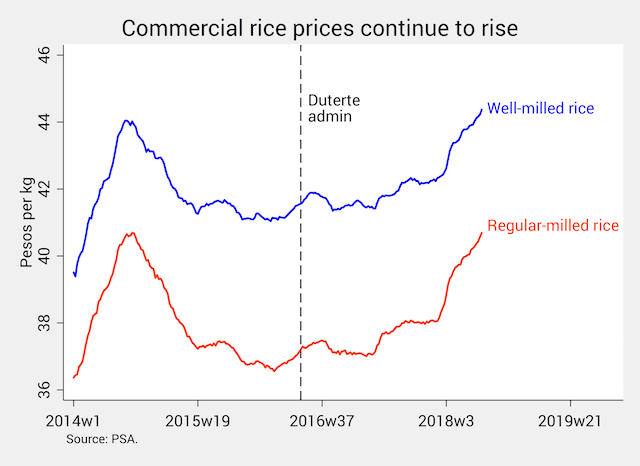 Meanwhile, raising the subsidies for the poor or even putting the brakes on TRAIN will require added legislation which could come in too late: by the time these laws are passed, inflation might have abated already.

Although the DOF says this practice is done in other countries as well, such proposal must undergo thorough study. Otherwise, it will only appear that the government wants to hide higher inflation by fudging the numbers.

The BSP expects inflation to settle in at 4.6% this year, above its 4% upper target. This means we can expect inflation to further increase till the third quarter of 2018 before it subsides.

Amid accelerating prices, the economic managers are playing a toxic blame game. Socioeconomic Secretary Ernesto Pernia, for example, recently said that, “There may have been a little bit of a slip in [the] timing of increasing policy rates” by the BSP.

As rightly pointed out by UP School of Economics Professor Emmanuel de Dios recently, the economic managers are, at the end of the day, in charge of the economy, and to see them passing the buck is not unlike watching the characters of Agatha Christie’s Murder on the Orient Express.

Everyone looks faultless, yet everyone is in fact to blame. – Rappler.com