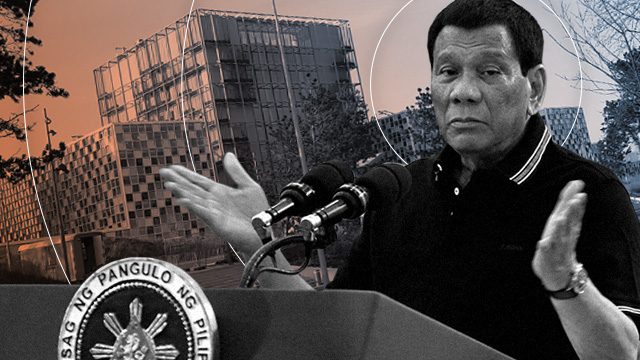 Facebook Twitter Copy URL
Copied
The decision rests with the Supreme Court. So far, the Philippines and Burundi are outliers on International Criminal Court departure.

Under President Duterte, the Philippines chalked a world record, a fact that hasn’t probably sank into our consciousness yet: we are the second country to leave the International Criminal Court (ICC). We share the global spotlight with Burundi, the first nation to do so.

Are we in good company?

The government of Burundi is accused of committing a “systematic attack against the civilian population” following reports of “killing, imprisonment, torture, rape and other forms of sexual violence, as well as cases of enforced disappearances.” Anywhere from 500 to 2,000 lives have been lost in the violence.

Still, the ICC will continue its preliminary investigation of alleged crimes against humanity in Burundi that was started by the prosecutor in 2016, when the central African country was still a member.

Technically, we are the 4th country to have quit the ICC. But Gambia and South Africa – which had announced their withdrawal – have since rejoined. Gambia’s return was made possible by a change in leaders while that of South Africa was courtesy of its High Court, both of which happened in 2017.

South Africa’s High Court ruled that the government could not make the decision without the approval of parliament, calling the move to quit the ICC “premature and procedurally irrational.” It was the opposition which challenged the withdrawal from the ICC.

A replay of what took place in South Africa is unfolding in the Philippines today. In May, the minority senators – Francis Pangilinan, Franklin Drilon, Paolo Benigno Aquino IV, Risa Hontiveros, and Antonio Trillanes IV – questioned Duterte’s unilateral withdrawal from the ICC before the Supreme Court. They are asking the Court to declare that the withdrawal from the Rome Statute, which established the ICC, requires the approval of at least two-thirds of all the members of the Senate.

(Currently, there are 23 senators as Alan Peter Cayetano was appointed to head the Department of Foreign Affairs. This means that at least 16 senators have to concur with Duterte’s decision.)

In other words, the opposition senators are arguing that the President cannot just opt out of an international treaty. A unilateral withdrawal, they said, is “equivalent to the repeal of a law” – which the executive cannot do. That is definitely the domain of Congress.

In 2011, the Senate concurred in the Philippine ratification of the Rome Statute, making it a law.

The senators’ 17-page petition is focused on this “singular constitutional question” and is clearly and simply written. They extensively cited the case of South Africa which has a strong bearing on the Philippines. (You can read their pleading here.)

Earlier in March, senators crossed party lines to endorse a resolution conveying the sense of the Senate that their concurrence is needed in all treaty withdrawals. Drilon authored the resolution signed by 13 others.

But Senator Manny Pacquiao, a fervent ally of Duterte, knocked it down.

While the Senate does not need a consensus to approve a resolution, what Pacquiao did was to effectively kill it. Here’s how it works in the Senate, as explained to me by an insider: “When a senator from the majority stands up to oppose the measure, his or her colleagues in the majority simply distance themselves from pushing for the resolution’s adoption. This leaves the burden of getting the resolution passed to a paltry minority.”

As it happened, the resolution was filed, sponsored, and defended on the floor, “but debates stalled it and was never calendared again.”

Joining the minority senators is a group that has lobbied for the ratification of the Rome Statute, the Philippine Coalition for the ICC. In a petition filed in June, they asked the Supreme Court for two things: to void Duterte’s unilateral withdrawal from the ICC because it is unconstitutional; and to submit this issue to the Senate for its concurrence.

Oral arguments on this case have been scheduled for August 14. Romel Bagares, lead counsel for the Coalition, told me in a Rappler Talk interview that the Court is expected to decide on this before Duterte’s announced withdrawal takes effect Mach 16, 2019, or a year after the Philippines transmitted its notice to the United Nations.

When I asked Bagares to comment on Duterte’s statement that the ICC is a “political tool,” he said the President shouldn’t fear the ICC because it is fair and rigorous. In fact, Bagares cited the example of a recent acquittal which shocked many: that of Congo’s former Vice President Jean-Pierre Bemba.

Bemba had earlier been convicted by the ICC trial chamber and sentenced to 18 years in prison for “having failed to prevent his militia from committing crimes…that included murder, rape, and pillaging.” But the ICC appeals chamber overturned his conviction because the judges had doubts about the actual participation of Bemba, calling him a “remote commander.”

The Philippines is still far off from an actual case being heard against Duterte. The ICC prosecutor has just started the first phase of its probe, called a “preliminary examination.”

But it is important that the legal question of the Senate’s concurrence in the executive’s withdrawal from the ICC be resolved. Otherwise, allowing the President to do this, on his own, gives him unbridled power. – Rappler.com