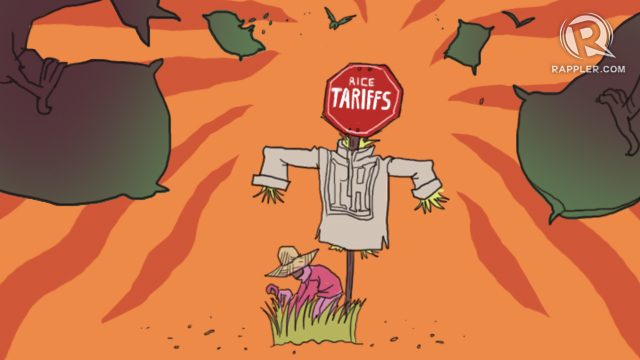 Facebook Twitter Copy URL
Copied
The proposed law removes the National Food Authority's rice import monopoly, and will kick off the process of substantially reducing the inefficiencies and collusion in the rice market system 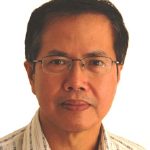 Blaming the senators for their version of tariffication (Senate Bill 1998), Serrano maintains that rice tariffication, which converts the quantity restriction (QR) on imported rice into tariff protection rates, is not about removing the “regulatory power of the NFA (National Food Authority) to control the entry of imported rice in the country.”

That is not entirely correct.Rice tariffication should remove the power of NFA to regulate rice imports. Article 4.2 of the WTO Agreement on Agriculture prohibits the use of restrictions on agricultural imports other than tariffs – and that includes non-tariff measures maintained through state-trading enterprises such as the NFA.

The enrolled rice bill sent to Malacañang hits the bull’s eye on rice tariffication. The rice import monopoly of NFA is removed by the proposed law, and is replaced with tariff protection. Congress approved 35% tariff rate on imported rice from ASEAN (and at least 5% higher if imported outside of ASEAN) to protect the local rice industry.

Putting aside the topic of complying with our World Trade Organization obligation, is the law now on the President’s desk good for our farmers? Opponents (for example, founding chairman Robert Hernandez of Alyansa ng Industriya ng Bigas) disagree. He contends that “deregulating the NFA would mean unregulated entry of imported rice, which would flood the market and depress palay prices.”

Let us check the data. Once the President enacts rice tariffication, we should expect that private sector importers would import rice from ASEAN member states, particularly Vietnam or Thailand, since the import tariff and freight cost are lowest. The tariff on imported rice from ASEAN would raise the price that rice consumers in our country pay by 35%. This is called the implicit tariff (IT).

If the implicit tariff is entirely passed on to farmers, a 35% IT will result in a 35% nominal protection rate (NPR). But under current trading restrictions implemented by the NFA, this is not the case. In 2017, for example, only 23% of the potential protection was passed on to farmers (see table) – that is, roughly three-fourths of what consumers pay above free trade price for rice does not go to rice farmers. Instead it goes to rice traders and to inefficiencies in the domestic rice marketing system (Dawe et al. , 2008; Mataia, et al., 2018). 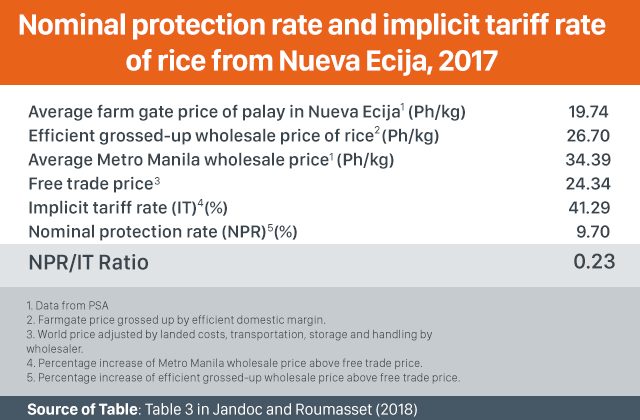 Rice consumers in Metro Manila in 2017 paid on average 41% more than the landed price of rice imported freely from Vietnam or Thailand. But our rice farmers sold their rice at only 9% above this free trade price. The difference or 32% went to rice traders, millers, or were simply lost to market inefficiencies in the rice value chain.

A compelling argument why President Duterte should sign this bill into law is that in doing so he kicks off the process of substantially reducing the inefficiencies and collusion in the rice market system, which for nearly half a century has made rice farmers poor. Farmers become better off as they capture more of the intended trade protection of the law from rice traders in collusion with corrupt NFA agents.

If farmers obtained 10% NPR in 2017, rice tariffication, coupled with investments in infrastructure under the government’s “build, build, build” program, could potentially raise NPR from 10% to 35%.

The tariff rate on imported rice could be lowered in the future without harming the vast majority of farmers. The current proposed tariff level of 35% is a maximum rate. If it is lowered, most of the rice farmers who are rice consumers during most part of the year can be made better off, along with non-rice farmers in rural areas, fisherfolk, workers, and residents in urban areas. – Rappler.com