[ANALYSIS] Why jailing kids is not just cruel, it’s stupid too 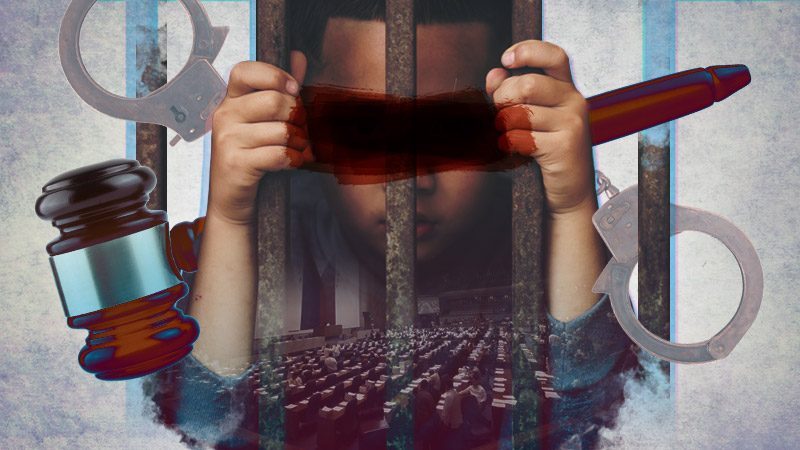 Facebook Twitter Copy URL
Copied
Are Filipinos really comfortable with this? Is this a true sentiment of our people that lawmakers are only faithfully expressing and executing? Believe it or not, our lawmakers have managed to reach a new low.

The latest appalling policy proposal to emanate from Congress is a set of bills seeking to lower the minimum age of criminal responsibility (MACR) from 15 to 12. Until yesterday, they were actually pushing for as low as 9.

This is nothing new. First put forward by former speaker Pantaleon Alvarez, the House bill is now being shepherded in by current Speaker Gloria Macapagal-Arroyo at the behest of President Duterte himself.

In the Senate, meanwhile, a counterpart bill is being pushed by Senate President Tito Sotto.

It almost needs no explaining, but this policy is not just inhumane but also grossly inefficient and inequitable. In other words, it’s both cruel and stupid.

A surprising number of countries worldwide allow children below 15 to be charged with and convicted of criminal offenses. Many – including 35 states in the US as of 2017 – even do not impose any minimum age at all.

Despite this, children are not small adults. They cannot in good conscience be considered fully aware of (and responsible for) their actions since they’re not yet mature intellectually, emotionally, and psychosocially.

Exactly for this reason, the UN Convention on the Rights of the Child declared that an MACR below 12 is “not to be internationally acceptable.” In fact, they encourage governments to raise such minimum age.

But in the Philippines we seem poised to go the other way. Unicef even went on to brand the recent proposals in Congress as an “act of violence against children.”

Aside from being inhumane, the current bills are also fraught with ambiguities. For instance, in the latest version of the House bill, and presumably in response to public furor, lawmakers swapped the term “criminal responsibility” with a euphemistic but no less detestable term: “social responsibility.”

What on earth does that mean?

As a way to combat crime, lowering the minimum age of criminal responsibility is also terribly inefficient.

First, Congress has so far failed to produce any empirical basis suggesting that a lower MACR could significantly deter or reduce crime.

Indeed, you’ll be hard put to find any. A 2017 paper showed that when the MACR was lowered in Denmark from 15 to 14, this did not deter 14-year-olds from committing crime. Children in conflict with the law were also likelier to recidivate, less likely to be enrolled in school, and likelier to have lower grades.

Though no similar study yet exists for the Philippines, one would expect lawmakers to cite at least some evidence to back their proposals. But as admitted by Arroyo herself, they’re just acting on Duterte’s wishes. “My agenda is the President’s agenda,” said Arroyo.

Just as disquietingly, another lawmaker displayed open disdain for “science” when asked to cite any supporting study during a TV interview.

Second, children commit but a very small portion of all reported crimes in the Philippines (1.72% as of 2015), and these often involve petty offenses like snatching.

Third, isn’t the Philippine National Police boasting that crime rates have plummeted since Duterte came into office? Or is this still a pipe dream that can only be fulfilled by arresting children too?

Fourth, even if it’s true that children are routinely employed by syndicates to commit crimes and escape criminal liability, why take it out on the children?

Why not go after the syndicates who enslave and expose them to harm’s way? Also, won’t the proposed policy encourage syndicates to exploit kids who are even younger (those aged below 9 or 12)?

A far superior policy would be to improve our legal infrastructure for juvenile justice, and further promote prevention, intervention, and rehabilitation programs tailored for children in conflict with the law.

Social workers in close contact with these children will be the first to attest that the Juvenile Justice and Welfare Act of 2006 is “not yet fully implemented, not fully enforced, not yet periodically monitored.”

Sadly, amid the din of public outrage, the Department of Social Welfare and Development (DSWD) has remained deafeningly silent. Why?

Jailing children is also deeply unfair to them on many levels.

First, a great many adults are ripe for arrest and trial out there, so why obsess on kids?

One need only think of plunderers and other corrupt officials who were recently set free or granted bail by the courts, such as Imelda Marcos, Juan Ponce Enrile, Bong Revilla, and Gloria Arroyo herself.

Second, and much more importantly, the proposed bills are blind to the socioeconomic realities—like poverty and hunger—that drive children into doing criminal acts.

Time and again studies have shown that poverty and crime form a two-way street, feeding into one another.

But getting caught and punished for petty crimes can leave indelible marks on the lives of children, making it even harder for them to reform and break free from the cycle of poverty.

In a collective statement, Filipino psychologists warned of numerous studies showing that “encounters with the justice system do not deter but rather result in greater subsequent crime for the young person.”

Is it not enough that thousands of minors today end up as collateral victims of Duterte’s brutal war on drugs, whether as orphans of EJK victims or EJK victims themselves (just like the hapless Kian delos Santos)?

No votes for the proponents

By now Duterte’s capacity to promulgate cruel and stupid policies no longer comes as a surprise.

Yet the bills seeking to jail kids as young as 9 or 12 still feel unnaturally harsh, even by Duterte’s standards. Needless to say, such proposals are inhumane, inequitable, and inefficient.

The policy is also highly hypocritical of former president Arroyo who signed into law the Juvenile Justice and Welfare Act of 2006, which originally raised the MACR to 15 from the 9-year minimum set in the Revised Penal Code. Hence, this is actually a reversal of Arroyo’s prior stance.

Even if the House seems to be relenting somehow to public pressure, keep in mind that until yesterday they were willing to jail kids as young as 9.

Are Filipinos really comfortable with this? Is this a true sentiment of our people that lawmakers are only faithfully expressing and executing?

If not, our system of representation is broken and perhaps the best way to respond is to punish the bill’s proponents by giving them zero votes on May 13 (if they are going for reelection) and even beyond.

But if so – if the Filipino people really want this policy to happen – what does this say of our society’s values? – Rappler.com