[ANALYSIS] US finally pays attention to East Asia and the Pacific 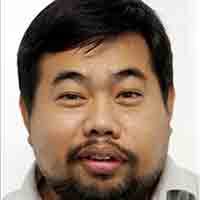 For the first time in almost 20 years, the United States has authorized the release of US$1.5 billion a year for the next 5 years – until 2023 – to allies and friends in the region and help them improve their defense capabilities.

Unlike US President Donald Trump’s controversial wall along the border with Mexico, the legislation went smoothly for the package of security and economic under the 2018 Asia Reassurance Initiative Act  (ARIA).

Trump signed ARIA into law on the very last day of 2018 amid the longest shutdown in the United States government.

But treaty allies and strategic partners in the region remained unconvinced. Is this for real?

They would rather wait for Washington to take steps to show it is really committed to help address security concerns in this part of the world, including North Korea’s nuclear weapons program in Northeast Asia and the rise of Islamist militancy in Southeast Asia – the two other objectives behind ARIA aside from countering China’s aggressiveness. (READ: China deploys militia as Philippines builds on Pag-asa Island)

Perhaps the loudest reaction from the region came from its oldest alliance partner, the Philippines, when Defense Secretary Delfin Lorenzana, in December last year, called for a review of the Philippines-US 1951 Mutual Defense Treaty  (MDT), a pact made at the height of the Cold War.

Lorenzana said he has asked his lawyers at the Department of National Defense to examine the  relevance of the MDT in light of the evolving security landscape as well as the emerging security challenges and threats that the Philippines now faces after China’s island-building in the South China Sea.

Diplomatic sources in Washington said Lorenzana’s call barely made a ripple in the US capital despite noise from some opinion-makers on both sides of the Pacific. American politicians were busy quarreling over Trump’s wall and policymakers in Pentagon and in the State Department would rather leave the MDT vague and broad than get sucked into a bigger conflict in the region.

The US is happy and satisfied with conducting more frequent freedom of navigation patrols and flights, testing how effective China’s anti-access and area denial efforts are and challenging its claims on almost the entire South China Sea.

Only Taiwan is rejoicing because the new law allows arms sales to it. The law also authorizes an exchange of high-official visits, something that Beijing frowns upon because of the One-China policy.

Lorenzana’s call is a step in the right direction. He wants to know if the new song in Washington is in tune with developments in the long-neglected region.

Since its independence in 1946, the Philippines has not been treated fairly by its former colonial master. For a long time, it remained a dumping ground for old, worn-out military equipment – World War II vintage vessels and Vietnam War-period helicopters.

During the Gloria Macapagal Arroyo administration, a former senior defense department official familiar with the deal said the US even forced the Philippines to acquire “as is, where is” UH-1H helicopters in exchange for an end-user certificate to purchase well-refurbished UH-1H choppers from Singapore, which was acquired at a friendly price. The number of delivered junk helicopters from the US was even reduced, from 10 to 7, due to inflation.

Between 2010 and 2016, under then-president President Benigno Aquino III, when the Philippines was getting huge military aid from the United States, some American lawmakers even tried to block the transfer of precision-guided bombs to destroy Islamist militants in the South, according to a retired general who was involved in the negotiations for the transfer of smart munitions.

From Obama to Trump

The current senior defense and military establishment officials are hoping that Trump’s Asia Reassurance Initiative Act will bring change in the region because former President Barack Obama’s “rebalance to Asia” has very minimal impact on the security environment in the East Asia and Pacific region.

In fact, it did not stop China’s island-building in the South China Sea nor put to a halt North Korea’s nuclear weapons program as U.S. paid more attention to Syria, Iraq, Afghanistan and Ukraine in the last two to three years.

At present, US security aid remains the lowest for East Asia and Pacific region despite Washington’s “ironclad” commitment, a rhetoric unmatched by action.

For 2019, the Philippines will get about $58 million in total security assistance (see table below), but zero amount was allocated from the Southeast Asia Maritime Security Initiative, the centerpiece program in the former Obama administration’s “rebalance to Asia” policy. 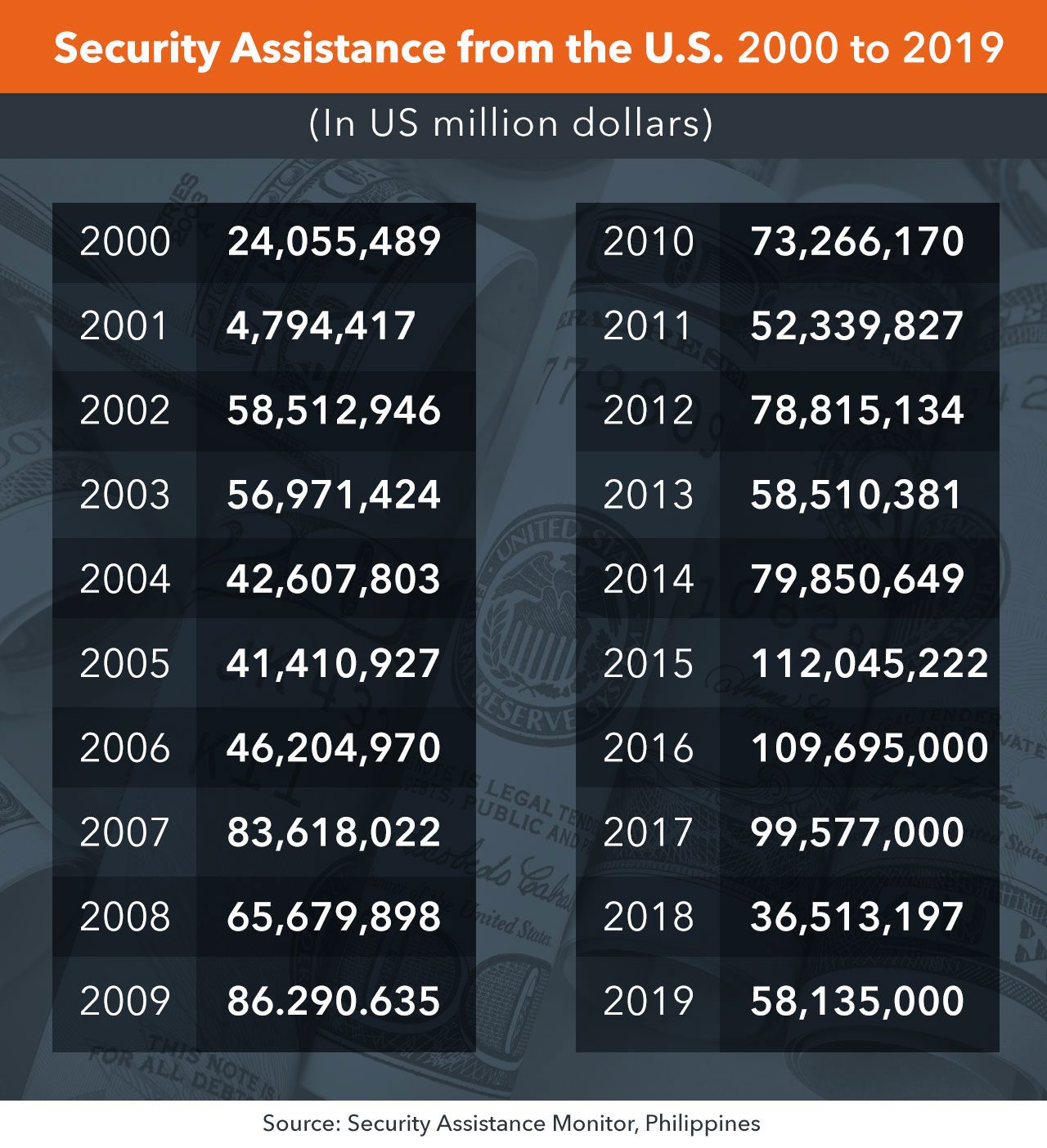 For instance, only $42 million in foreign military financing (FMF) will go to East Asia and Pacific region this year, or less 1% of the US State Department’s total $5.3 billion FMF budget for 2019, according to Eric Sayers of the Center for a New American Security (CNAS). The Philippines will get $30 million and Vietnam gets $12 million. Indonesia and Mongolia, which used to receive FMF assistance.

FMF funds are a form of security assistance mechanism by the State Department to build the military capacity of front-line ally and partner states. The transfer of three Hamilton-class cutters, the most powerful ocean-going vessels in the Philippine Navy. were funded by FMF funds

The amount pales in comparison with the volatile Near East region with over $5 billion ($3.3 billion for Israel, $1.3 billion for Egypt, $350 million for Jordan, $50 billion for Lebanon) and Pakistan with $80 million. Thus, the Philippines is the only non-NATO major ally with the least military support. FMF funding in the region has been falling despite Obama’s “rebalance to Asia” policy.

In terms of military training and education, Sayers said the East Asia and Pacific region will get only $9.8 million this year, the lowest allocation compared to other areas – Europe and Eurasia get $26.1 million; Middle East has $15.1 million; South and Central Asia receive $11.1 million; and the Western Hemisphere has $11 million.

Jordan and Lebanon alone were expected to get $6.5 million, the same amount allocated to Indonesia, Malaysia, Mongolia, Sri Lanka and Vietnam combined. The Philippines will get $2 million, again the least amount for any non-NATO ally.

Although there is growing acceptance that the Indo-Pacific and US-Chinese competition represents America’s most pressing long-term challenge, Sayers said there remains a stark contrast between how the administration and Congress continue to budget for Asian security matters compared to other international issues.

He said the priorities in Europe are quickly resourced, supported, and even expanded, while similar actions in the Indo-Pacific are increased modestly and under tight budgetary scrutiny. An example is the Southeast Asia Maritime Security Initiative, which was allocated with $84 million for the entire region in 2019, slashed by both the Senate and House of Representatives from Pentagon’s request of $98 million.

In an attempt to correct the inequity of funds and reflect US security priorities, both houses of Congress came up with ARIA, but Sayers said it remains unclear if the $1.5 billion a year funds for the legislation will be made available.

It appears that the United States has not moved on from its Cold War approach, which was to take on Russia’s challenge in the European theater but neglect its allies and partners on the other side of the globe.

Lorenzana’s call for a review of the treaty is relevant and timely. Obama’s “ironclad” commitment and Trump’s recent reassurance are empty rhetoric until the Philippines gets what it deserves as America’s longtime partner and only non-NATO major ally in Southeast Asia. – Rappler.com