[ANALYSIS] Duterte a ‘competent’ economic manager? Not so fast

May 9, 2019 12:34 PM PHT
JC Punongbayan
Facebook Twitter Copy URL
Copied
To thank Duterte for his 'political will and decisive action' on inflation is like thanking an arsonist for putting out a fire he created in the first place 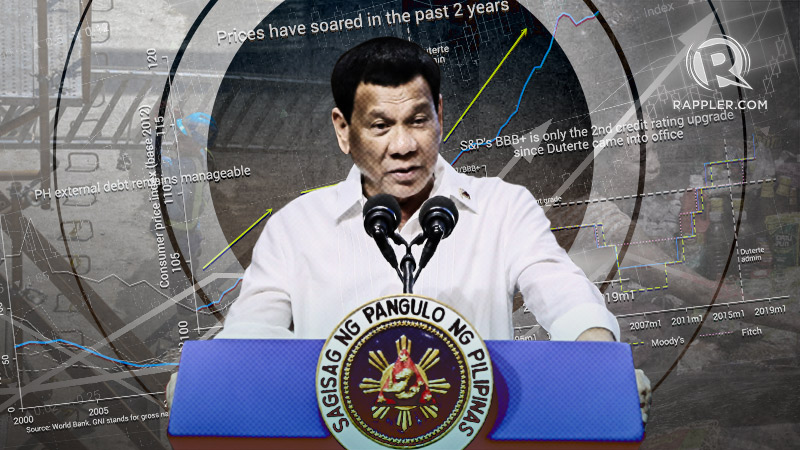 Now that things seem to be looking up for the economy, President Duterte is being branded as a “competent” economic manager. But nothing could be farther from the truth.

Two bits of good economic news recently greeted the nation. First, the country earned its highest “credit rating” ever, a BBB+ from Standard and Poor’s. Second, inflation – which measures how fast prices are rising – reached a 16-month low at 3% in April.

An elated Palace quickly – and unsurprisingly – attributed these developments to Duterte and his economic managers.

As for lower inflation, Panelo said it is proof of Duterte’s “competence in managing our country’s economy,” as well as his “political will and decisive action in addressing this national issue.”

But these self-congratulatory remarks are wholly undeserved.

Aside from the fact that Duterte doesn’t care one bit about economic policymaking, the credit rating upgrade and lower inflation paint but a limited picture of the overall state of our economy. We should not fixate on them.

What are credit ratings anyway?

Just like you and me, the government often finds itself having to borrow. But governments are not equally creditworthy, and lenders need a way to distinguish between good and bad risks.

One such way is by tagging countries according to their creditworthiness, which is essentially the purpose of credit ratings.

In particular, governments aspire to earn an “investment grade” rating because it signals to the world their low chance of defaulting, and improves their chances of securing funding.

Put simply, they think the Philippines’ ability to pay off its external debts is improving.

True enough, our external debt stocks (as a share of our national income) are continually declining and among one of the lowest – if not the lowest – in ASEAN right now (Figure 1). 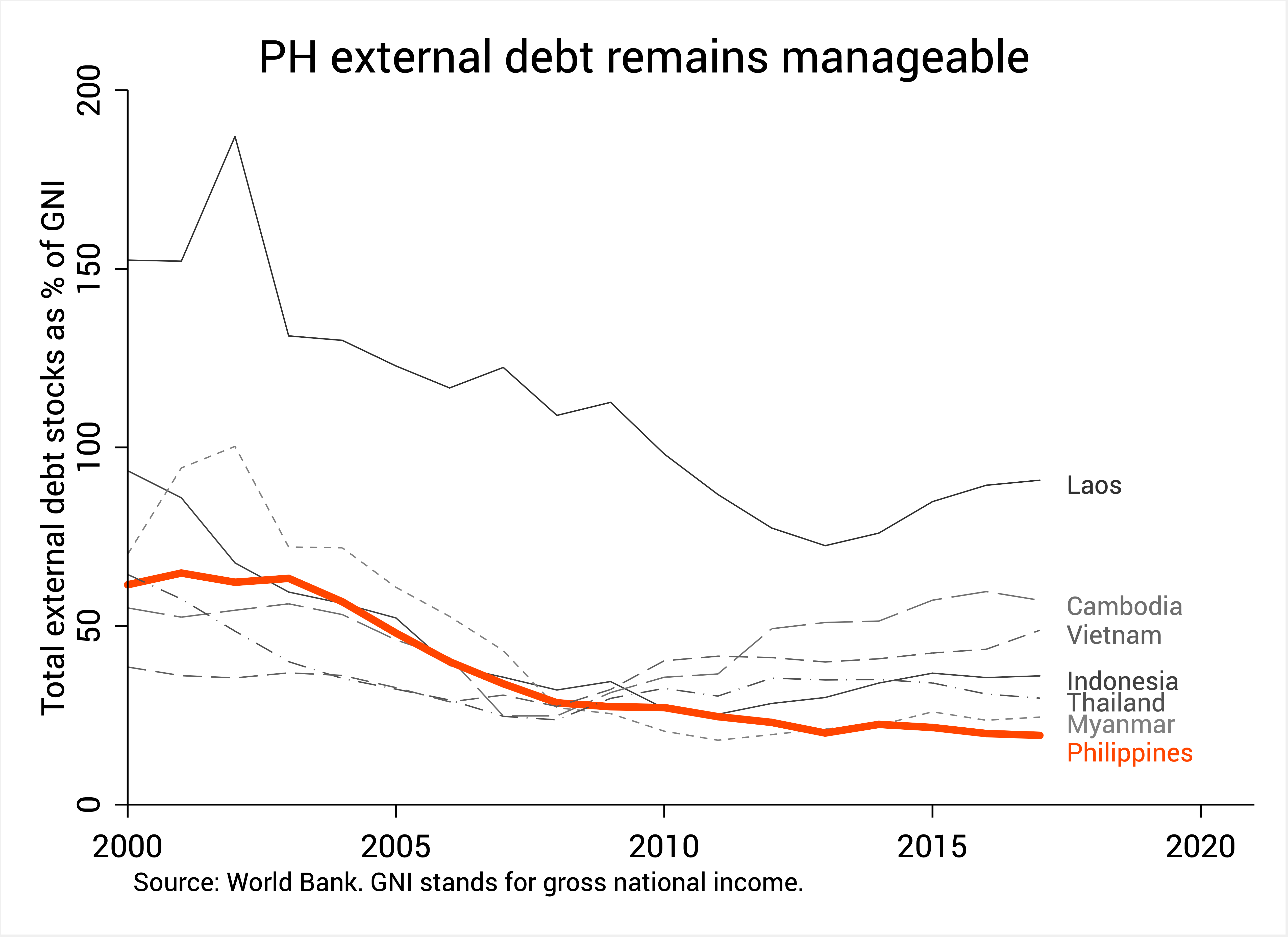 Yet it’s easy to overstate the significance of the recent credit rating upgrade.

First, news just broke that economic growth dropped to 5.6% in the first quarter of 2019 – a 4-year low – on account of the belated passage of the 2019 budget. If the growth slowdown continues, Standard and Poor’s might take back its credit rating upgrade.

Second, Figure 2 below shows that our credit ratings have in fact been rising steadily since the global financial crisis in 2008. Our recent BBB+ rating from Standard and Poor’s is nothing but a continuation of this trend. It should therefore come as no surprise. 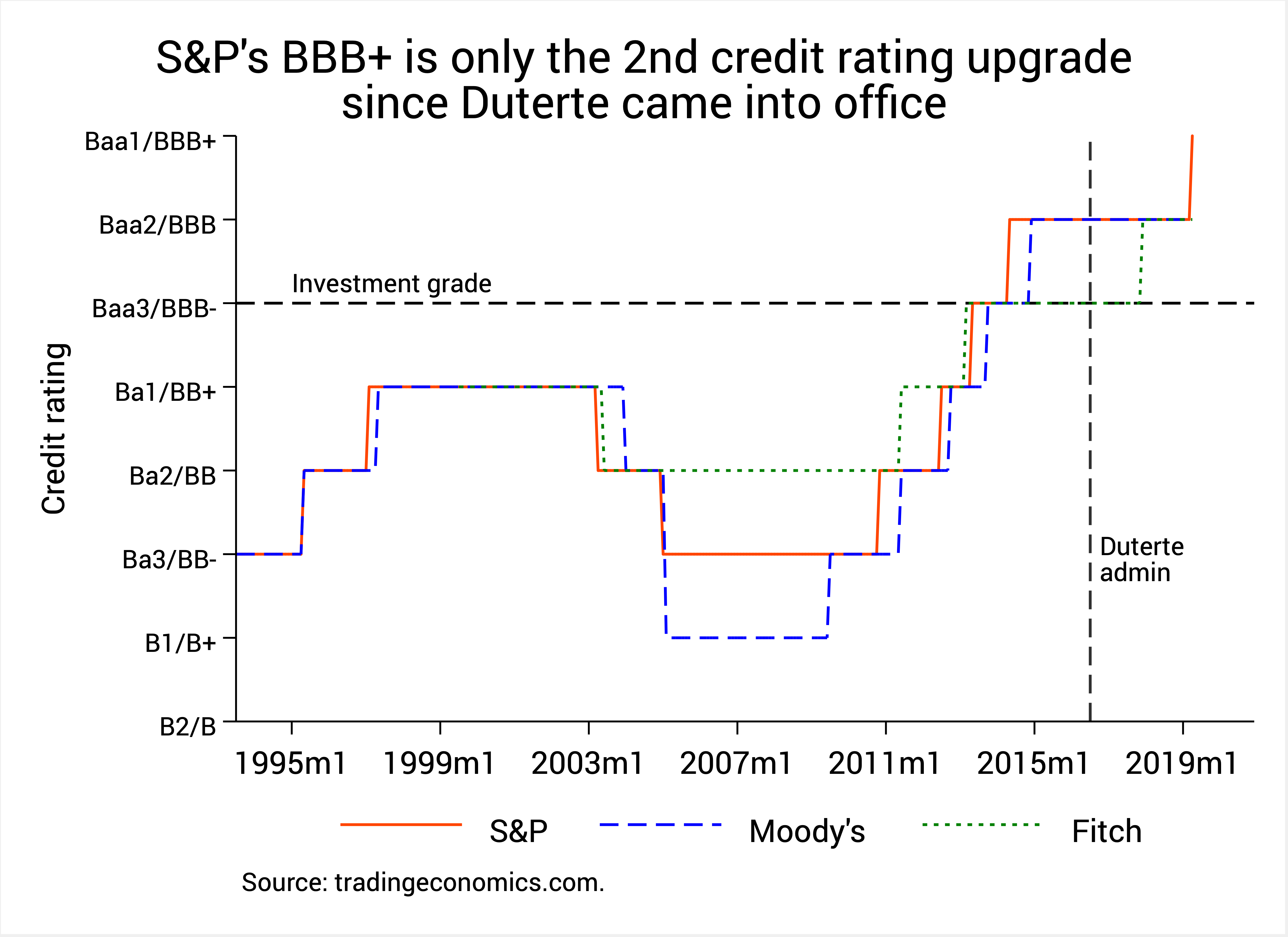 Third, it was a bit of a stretch for Finance Secretary Carlos Dominguez III to say the credit rating upgrade is “an undeniable tribute to President Duterte’s unwavering commitment to bold reforms and sound economic policies…and his strong political will to get these tough initiatives done at the soonest.”

But hasn’t Duterte relegated economic policy entirely to his cabinet?

And which “bold reforms” is Secretary Dominguez referring to? Is it TRAIN (which likely worsened poverty and inequality) or Build, Build, Build (which is widening the government’s “twin deficits”)?

The Palace also sang praises for Duterte upon learning that inflation receded to a mere 3% in April, well within the government’s annual target.

Taken alone, it would seem all is well again. But it’s not.

When you ride a plane, your ears may pop because of the rapid change in altitude. Once you reach cruising altitude, though, your ears pop no more.

Analogously, most of us felt the steep and painful rise of prices last year. But just because inflation has already subsided doesn’t mean prices are any lower. In fact, on average, they’re higher than ever before.

Figure 3 below shows that a few years before Duterte came into office prices were rising fairly gradually. But since then prices have risen dramatically, and only in recent months did they stabilize. 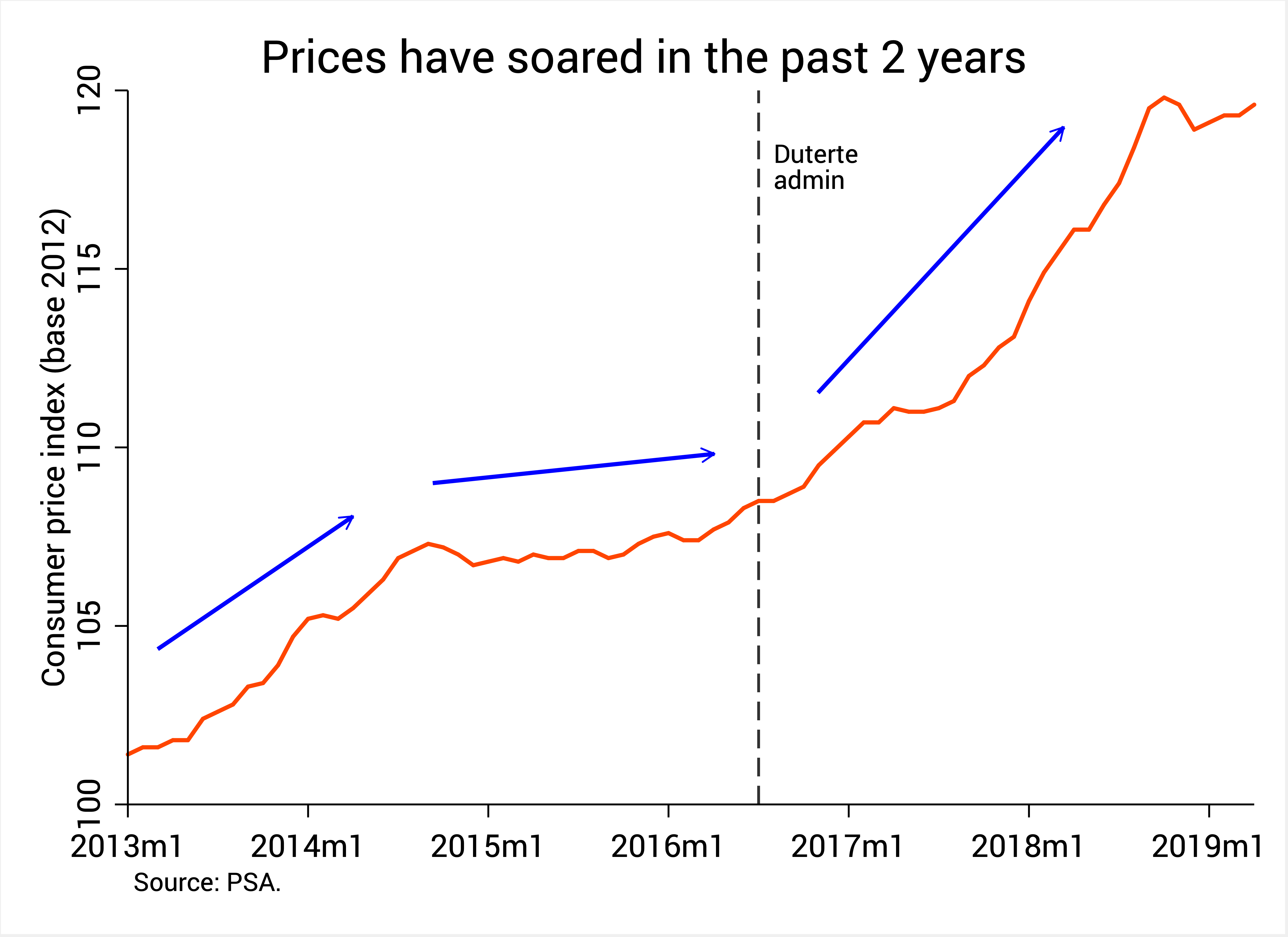 Economists of the Department of Finance have also predicted – using their own models of the economy – that inflation would automatically subside in the wake of TRAIN, even without any prodding from Duterte.

Crucially, government itself partly caused the rise of inflation through the 2017 TRAIN law. Therefore, to thank Duterte for his “political will and decisive action” on inflation is like thanking an arsonist for putting out a fire he created in the first place.

Meanwhile, the administration’s reaction to sky-high inflation was disorganized and confused.

In August last year, Speaker Gloria Macapagal Arroyo herself, an economist by training, took up the cudgels, huddled with the economic managers, and came up with 5 concrete proposals to quell inflation – a rare display of economic leadership that Duterte could not even feign.

At the same time, Duterte’s economic team simply resorted to spewing callous remarks and passing the buck. They told us to “tighten our belts,” stop being “crybabies,” and just be hardworking. At one point they even had the gall to pin the blame on economic forecasters and media.

News of a credit rating upgrade and lower inflation are very much welcome.

However, they speak nothing of the slowdown of economic growth, the widening budget and current account deficits, the recurring shortages in water and power, the ineffective war on drugs, and the regressive nature of TRAIN.

In other words, let’s look at the whole gamut – not just a handful – of indicators when assessing the overall state of the economy.

Moreover, to tout recent good news as the product of President Duterte’s leadership creates the dangerous – and emphatically false – narrative that Duterte is serious about economic policymaking and steering it wisely for the benefit of Filipinos.

This is a blatant lie. As evidenced by the response to inflation, the war on drugs, the Boracay shutdown, and the pivot to China, Duterte’s policymaking has been far from careful, nuanced, and evidence-based. Rather, he has a knack for policies that are reckless, simplistic, and evidence-bereft.

Duterte is no economic manager. Let’s disabuse ourselves of that silly notion once and for all. – Rappler.com