Facebook Twitter Copy URL
Copied
Marty Baron, executive editor of The Washington Post says: 'The American press has been given extraordinary freedom by the Supreme Court’s interpretation of the First Amendment. In return, it owes society courage.' 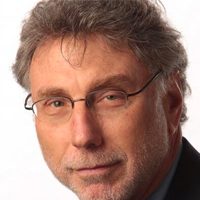 Note: This is the speech of Marty Baron, executive editor of The Washington Post, after receiving on Thursday, June 13, the Canadian Journalism Foundation‘s Special Citation “in recognition of his extraordinary contribution and fearless approach to journalism.” Rappler CEO and executive editor Maria Ressa was also honored by CJF  that event.

Thank you so much for this recognition. I am deeply honored.

Over my 43 years in this profession, I have been privileged to work with immensely talented and dedicated journalists in newsrooms I have led as the top editor – The Washington Post, The Boston Globe, the Miami Herald – as well as in the two others where I ended up in senior positions, The New York Times and the Los Angeles Times.

Each of us in a newsroom possesses individual strengths. Yet the greatest accomplishments of our institutions invariably require a collective effort. We all rely on others to succeed.

That is true for me – as much, or more, than anyone.

Accepting an award such as this evening’s reinforces my gratitude toward those I have had as colleagues – and my admiration for their ambitious, groundbreaking and routinely courageous work.

I also want to express my admiration and gratitude to individuals outside our organizations – those who reach out to us in the press with revelatory information, hoping that doing so will serve the public good.

At times, this might be someone with confidential information on a national security matter. Those individuals take great personal and professional risks to inform citizens about wrongdoing or abuse of power by their governments. Their bravery is, almost always, motivated by concern for country.

At other times, as in The Boston Globe’s investigation of the Catholic Church, individuals open up their lives so that a pernicious evil can be exposed. They are frequently and understandably uncertain that we in the press will listen with the generosity and empathy they deserve. They can’t be sure we will be sensitive to them – or that we will be serious about getting at the truth.

Vulnerable as they may be, they come to us out of a determination to see justice done, out of faith that speaking to us is worth a try and with hope that others will not have to endure what they did.

Without the survivors of abuse who spoke with Boston Globe journalists, our investigation would have faltered. To do our work properly required them to open old and deep wounds. Yet they found the strength to do so.

They had held on to the truth for years, indignant that it had been suppressed. The Church had covered up heinous acts for a half-century, at least. Other institutions that were supposed to listen to survivors did not – or responded to their pain with inattention, indifference, inertia or callousness.

By telling their stories to the Globe, there was at least the prospect of accountability. It was important we do right by them – and by others who had suffered as they did but had yet to come forward.

Let me tell you about a moment in the aftermath of that Boston Globe investigation and the movie Spotlight that portrayed it. It is a moment I shall not forget. A moment for me that maintains a vivid resonance in the present.

It happened a little over 3 years ago, during a screening of Spotlight at my alma mater, Lehigh University. During the Q&A session, a man rose to the microphone to speak.

“It was a very hard movie for me to watch,” he said. “I tried to see it a couple of times. I only got to the parking lot and turned around. I’m 80-plus years old. I was sexually abused by a priest in 1947. I was 11. I live with it every day. I was fatherless. I didn’t know if anybody would believe me. I never spoke about it. My wife passed away many years ago. She never knew about it. It was in ’47 he molested me. And he was ordained in 1947.

“Not a day goes by,” he said, “that I don’t have to live with this. I never spoke about it like I said – thank you – till it broke in Boston and then I started talking about it…”

“I do go to therapy,” he continued, “I took my children with me. So, they do understand. And they fully support me. And I thank you very much.”

I think about that gentleman when I hear our president say the press is the “enemy of the American people.”

He did not see us as his enemy. He saw us as an ally. Finally, he had one. Other survivors of abuse – and their families and friends – feel the same. And so do many others who have had journalists listen to them when no one else would – giving power to those who had none, in the cause of fair treatment.

They were grateful for journalists who sought to get at the truth when people in authority had trampled on it or concealed it.

Today, we face another threat, perhaps even more subversive. This one is to the very idea of truth itself.

In the United States, it began as a calculated assault on our profession, though it hasn’t ended there. It has gone on for more than 4 years now: during presidential primaries, a general election, and past the half-way mark of a presidency.

First there was an effort to marginalize the press and then to delegitimize us. Then there was a campaign to dehumanize us as disgusting and scum and garbage and the lowest form of life. Ultimately, we were depicted as “fake news,” “enemies of the people,” a “stain” on the country, traitors.

There is no mystery as to why this is happening. It is a cynical strategy to disqualify the press as an independent arbiter of fact.

But we in the press are not the only targets. The aim is to disqualify other institutions and professions as arbiters of fact, too: the courts, law enforcement, intelligence agencies, historians, even scientists.

Under assault are all the elements that help us determine what is factual: evidence, expertise, experience. They are devalued or dismissed or denied.

The goal is evident: to obliterate the idea of objective truth.

Before the 2016 election, Lesley Stahl of CBS News went to Trump Tower to meet with candidate Donald Trump. At one point, after he started into his familiar harangue about the media, she asked him why he persisted in leveling such attacks. As she tells it, he said, “You know why I do it? I do it to discredit you all and demean you all, so when you write negative stories about me no one will believe you.”

It was a moment of startling but revealing honesty. That is, in fact, the president’s goal: no one should believe the media if we contradict him. The public should believe only one person – him. Him alone. And 100% of the time.

Bret Stephens, the conservative columnist, put it perfectly in a speech in early 2017 when he was at The Wall Street Journal, before he joined The New York Times op-ed page.

The president, he said, “is trying to substitute propaganda for news, boosterism for information.”

“His objection,” he continued, “is to objectivity itself. He’s perfectly happy for the media to be disgusting and corrupt – so long as it’s on his side.”

Stephens spoke of our obligation “not to look around, or beyond, or away from the facts, but to look straight at them, to recognize and call them for what they are, nothing more or less. To see things as they are before we re-interpret them into what we’d like them to be…To speak the truth irrespective of what it means for our popularity or influence.”

That is good counsel for journalists. For all citizens, too.

If we come to feel the truth is unknowable, mission accomplished: people just believe what they would like to believe.

If we conclude that everyone is lying for selfish reasons, mission accomplished as well. Then it doesn’t matter if our leaders are being untruthful, as long as they serve our individual interests.

If in the United States we now believe truth can only come from the head of state, then we have surrendered the very idea that inspired the founding of our nation.

The president apparently has not been content to vilify the press with malicious and menacing language. Nor has he been content to cynically undermine the idea that there are facts and truth independent of what he would like them to be – or declares them to be.

Several weeks ago, his administration – through the US Department of Justice – sought to effectively criminalize common practices in journalism that have long served the public interest.

The latest 18-count indictment of Julian Assange under the Espionage Act of 1917 presents a grave threat to customary day-to-day reporting on national security matters. The indictment accuses Assange of seeking, receiving, and then publishing classified material.

As Carrie DeCell, an attorney with the Knight First Amendment Institute, put it: “That’s exactly what good national security and investigative journalists do every day.”

“These charges,” she said, “could be brought against national security and investigative journalists simply for doing their jobs, and doing them well.”

Dating as far back as the Pentagon Papers in 1971 – when Daniel Ellsberg provided The New York Times and then The Washington Post highly secret documents that revealed a history of government deceit about the Vietnam War – journalists have been receiving and reporting on classified information. More recently, The Washington Post and The Guardian published classified information obtained by Edward Snowden to disclose a global surveillance program that represented a breathtaking intrusion, with scant oversight, into the privacy of US citizens and individuals worldwide.

When this expansive new indictment against Assange was announced, an official for the Department of Justice said it “takes seriously the role of journalists in our democracy” and that “it has not and never has been the department’s policy to target them for reporting.”

But the legal theory leveled against Assange could easily be weaponized against journalists. It is hard to escape the conclusion that the administration’s intent is to intimidate the entirety of the American press: first we get Assange, next we might come after you.

All of this is made worse by government officials’ continuing pattern of overclassifying information, often for no reason other than to shield themselves from scrutiny. And it could be made still worse by the Trump administration’s fondness for invoking national security and declaring national emergencies.

If steel and car imports from our allies can be labeled threats to US national security, it doesn’t require much imagination to envision this government classifying vast categories of information as national-security secrets.

For the press, already subjected to incessant attack, this poses a new and sobering challenge. But we cannot be intimidated. If we fail to do our jobs for fear of retribution, we will betray the spirit of the First Amendment.

James Madison, principal author of the First Amendment, wrote of “the right of freely examining public characters and measures.” That right is still ours, thankfully – and it will mean nothing if we do not exercise it with vigor and tenacity.

Anthony Lewis, the late New York Times columnist and First Amendment scholar, once wrote words we should live by today: “The American press has been given extraordinary freedom by the Supreme Court’s interpretation of the First Amendment. In return, it owes society courage.”

We at The Washington Post understand our role in a democracy, and I can say this with confidence: We will meet our obligations.

Thank you again for inviting me to be with you this evening. – Rappler.com