[ANALYSIS] Praise Duterte for lowering inflation? He didn’t do it 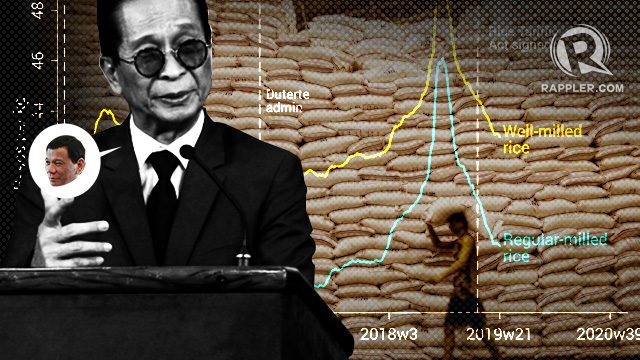 Facebook Twitter Copy URL
Copied
Since we’re coming from very high prices last year, and prices have now stabilized at high levels, we can expect inflation to drop significantly this year – all thanks to the base effect

Inflation may have gone down, but don’t thank Duterte for it.

Last week we learned that inflation dropped to 2.7% in June, the lowest in nearly two years and well within the government’s target range of 2% to 4%.

If you ask Palace Spokesperson Salvador Panelo, the Duterte administration deserves praise for this.

In an interview last week he said, “Where are the critics and the detractors? Why are you suddenly silent? Don’t you think it’s about time for you to give a little praise to the economic managers, to the lawmakers, and to this President – who together have done something to reduce and slay the soaring inflation rate?”

In this article we explain why the administration deserves neither credit nor praise for lower inflation.

Not only was the government’s response to last year’s acceleration of prices wholly unsatisfactory, they also partly caused it in the first place.

More to the point, inflation is lower now largely because of a simple technicality.

The difference between each succeeding month is the same: P30,000. Yet the percent change differs depending on the base number you’re using.

This is otherwise known as the “base effect.”

The same logic goes for inflation, which is just the percent change of the “consumer price index” (CPI), or the general price level of goods and services commonly consumed by Filipinos.

Figure 1 below shows that before Duterte came into office we were dealing with prices that were rising gradually.

But soon after, prices began to soar. As of June this year, prices were 10.5% higher than when Duterte came into office. 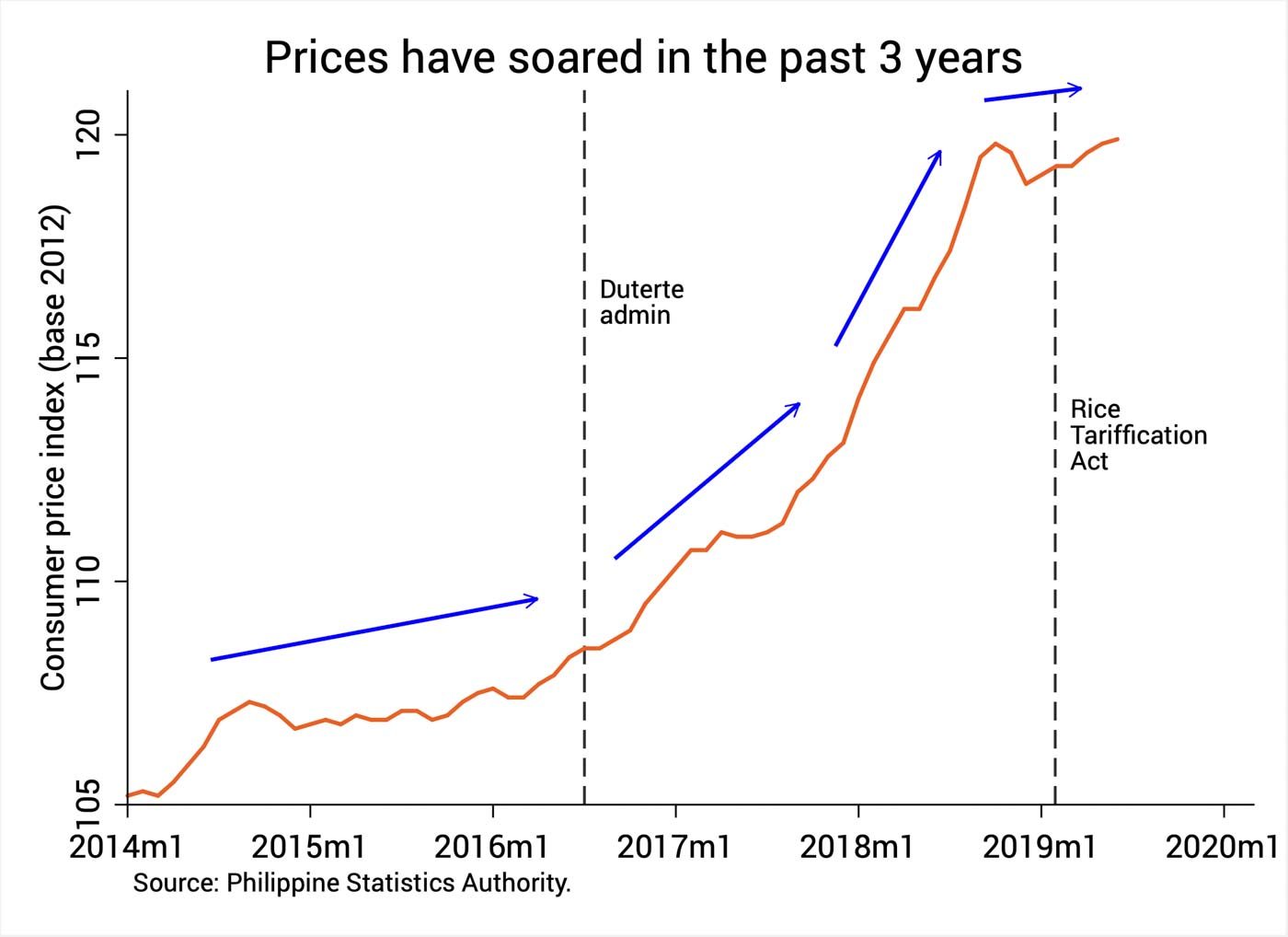 In previous pieces, I explained that last year’s spell of high inflation was a confluence of high world oil prices, the mismanagement of NFA rice stocks, and the TRAIN law. (READ: Why is Philippine inflation now the highest in ASEAN?)

Since we’re coming from very high prices last year, and prices have now stabilized at high levels, we can expect inflation to drop significantly this year – all thanks to the base effect.

To drive home the point, think of a plane ride. Right after takeoff, the tremendous change in altitude and pressure causes a faint pop in your ear. But once the plane has reached cruising altitude, the pressure difference disappears and, along with it, the popping sensation.

If we’re no longer disturbed now by high inflation, that’s because prices are already “cruising” at a relatively high altitude.

If you listen to the economic managers only, you will hear from them no mention of this base effect.

Instead, they will attribute lower inflation to policies they pushed, like the Rice Tariffication Act signed into law by President Duterte in this year’s Valentine’s Day.

But Figure 1 shows that even with the passage of the Rice Tariffication Act, prices have, in fact, continued to increase.

Figure 2, meanwhile, shows that commercial rice prices also started to drop well before the passage of the Rice Tariffication Act. This is on account of delayed imports and the onset of last year’s harvest season. This is not to say that the Rice Tariffication Act will have no impact on the general price level in the coming months and years.

But as consumers reap the benefits of cheaper rice, the government must also look out for the welfare of our poor rice farmers, who are already reportedly reeling from depressed incomes due to farmgate palay prices that are dropping like a rock.

The Rice Tariffication Act also features a hefty P10-billion fund raised from the tariff revenues and earmarked for rice farmers.

But it’s too early to tell whether this fund will dodge the problems encountered by similar agricultural funds before it, and sufficiently offset the hardships of our farmers.

First, the Duterte government itself partly caused the price acceleration.

Apart from the TRAIN law which directly imposed higher excise taxes on goods like petroleum products and sugar sweetened beverages, incompetent rice management and infighting in the National Food Authority Council caused the delayed importation of rice that drove rice prices through the roof.

Second, the economic managers were virtually stymied into inaction.

Duterte himself did not offer any clear policy direction on how to deal with the situation, and was seemingly unaware and unconcerned about what was going on. It was former House speaker Gloria Arroyo – an economist by training – who first convened the economic managers to list down concrete steps to fight inflation.

Finance Secretary Carlos Dominguez was even glad about high inflation at some point. He said it should be taken as a “sign of [a] growing and robust economy.” One of his assistant secretaries also said year-on-year inflation was just an “abstract concept” and “not how people experience prices.”

Fourth, the Cabinet floated the idea of meddling with the very definition of inflation.

For instance, Secretary Dominguez said they thought of removing tobacco products from the CPI. Meanwhile, former agriculture secretary Manny Piñol even wanted to remove the food category altogether, insofar as it was the main driver of inflation. (Piñol also claimed repeatedly that rice prices weren’t to blame for inflation.)

Fifth, the economic managers habitually passed the blame on private sector actors: first on economic forecasters for inaccurate forecasts, and then on analysts, and even media for doggedly pursuing inflation stories.

All in all, the economic managers’ handling of the inflation situation last year left much to be desired.

Make no mistake: lower inflation today is desirable. But it would be a mistake to say that Duterte and his economic managers were largely responsible for it, and therefore deserve praise.

This is not the first time that the Palace heaped praise on Duterte’s supposed economic management skills.

Previously, Panelo also said lower inflation is proof of Duterte’s “competence in managing our country’s economy,” as well as his “political will and decisive action in addressing this national issue.” (READ: Duterte a ‘competent’ economic manager? Not so fast)

Expect more servings of economic Kool-Aid from the Palace in the run-up to Duterte’s fourth State of the Nation Address. – Rappler.com