[ANALYSIS] What Duterte doesn’t get about Metro Manila traffic 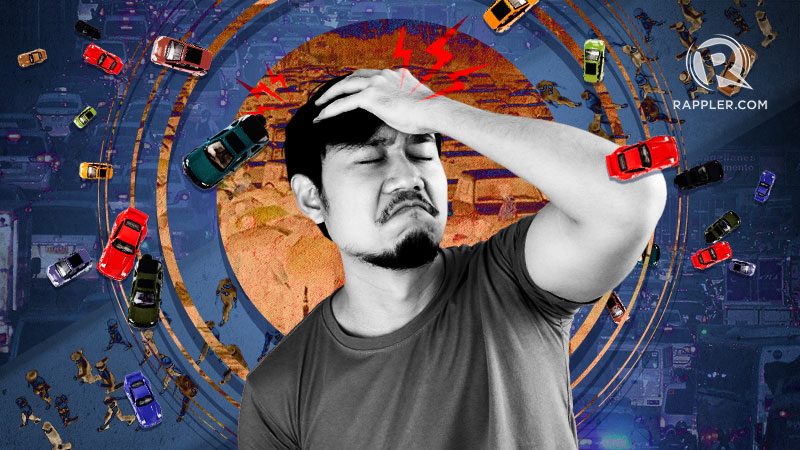 Facebook Twitter Copy URL
Copied
Metro Manila is more than the sum of its parts, and traffic authorities will do well to keep this in mind. Otherwise, their policies will only keep backfiring and making traffic worse.

Admit it. Part of your soul dies whenever you commute these days. Yet authorities seem nowhere near solving Metro Manila’s atrocious traffic situation.

Back in 2015, candidate Rodrigo Duterte even sounded confident he could solve our traffic woes. He suggested procuring more passenger cars for the MRT and LRT lines, as well as building a slew of new railways.

Fast forward to February 2019, Duterte said he fulfilled all his campaign promises – except easing EDSA traffic. He even said, “let EDSA rot.”

Recent data from the Asian Development Bank also show that Metro Manila is the most congested city in developing Asia (Figure 1).

Traffic jams are nothing new, of course. But the Duterte government’s traffic policies of late leave much to be desired, and some have been downright pernicious.

Worst of all, they betray a fundamental lack of understanding of what’s wrong.

Just like the organs in your body or the trees in a forest, the cities of Metro Manila are interconnected parts of a larger, more complex network. Tinkering with one part of the system affects many, if not all, other parts.

Yet even this basic idea hasn’t yet dawned on our traffic authorities.

For instance, the Metropolitan Manila Development Authority (MMDA) – which is attached to the Office of the President – once said it would entertain a proposal to turn EDSA and C-5 into one-way roads, the former southbound and the latter northbound.

Plainly, this is unfeasible. Absent several more roads connecting EDSA and C-5, traffic will only pile up in the cities sandwiched in between, especially Pasig City, which has been dubbed Metro Manila’s “bottleneck capital.”

In August, the MMDA also strictly implemented its yellow lane policy on EDSA. By end of this year, the MMDA even plans to fence off those yellow lanes.

But by choking off entry and exit points for all other vehicles, the yellow lane policy turned EDSA into a virtual parking lot. Buses moved slower rather than faster, and the irony was not lost on commuters.

To be fair, the MMDA has a huge “coordination problem” to surmount: it works with and implements the policies of the Metro Manila Council, which comprises all 17 mayors of Metro Manila.

It’s hard enough to get two people to cooperate, what more 17 different cities and a municipality, each with its own traffic schemes.

Metro Manila is more than the sum of its parts, and traffic authorities will do well to keep this in mind. Otherwise, their policies will only keep backfiring and making traffic worse.

Authorities are also hot on the heels of buses (what with a provincial bus ban in the works), even if private cars contribute to traffic the most.

Let’s admit it: our society caters too much to cars and their owners.

On some level it’s understandable. Cars have become a convenient way to go around the metro vis-à-vis taking the MRT/LRT or jeepneys. For many of us, cars have also become quite affordable.

But cars are a terribly inefficient way of moving people. They occupy too much space per person they carry. Car drivers often complain they’re in traffic without realizing they are traffic. The animation below demonstrates cars’ inefficiency vis-à-vis buses and trains:

A total car ban is impractical, of course, absent viable alternative commute options. Yet government should be starting to wean people off their cars.

Car users can be successfully nudged to take more bus rides, as shown by the point-to-point (P2P) buses provided by certain malls. Faster, more reliable railways can also induce drivers to leave their cars behind.

To be fair, a number of bus rapid transit (BRT) systems and railways are part of the government’s Build, Build, Build program. Yet many of these projects are still under review or have yet to break ground more than 3 years since Duterte took office. (READ: The pipe dream that is Build, Build, Build)

Duterte also officially blocked foreign aid from critics of his drug war, even if it entails canceling a prospective BRT project from France costing 21 million euros.

Having identified private cars as the problem, the design of our urban landscape must also be overhauled to abolish the privileging of cars.

But for many people, the solution to more cars is still more roads.

Parking lots and buildings are also sprouting like mushrooms just to accommodate cars.

Senator Sherwin Gatchalian is even pushing for a Parking Fees Regulation Act that aims to make parking at malls and similar establishments more affordable.

But this only incentivizes the use of cars over more efficient, inclusive, and sustainable modes of moving around such as public transport, cycling, or even walking.

Finally, some people suggest an overhaul of the existing number coding scheme.

A friend’s dad, Arthur Carandang, always suggests to me combining the current number coding scheme with the old odd-even scheme, at least during rush hours.

Other proposals aren’t as sensible. A former PAGCOR (Philippine Amusement and Gaming Corporation) consultant suggested a ban on vehicles based on their brand: Toyotas on Mondays; Mitsubishis, Hyundais, and Isuzus on Tuesdays; and so on.

Such an inane idea should never have seen the light of day. Yet the MMDA went out of its way to present this brand coding scheme in a press briefing, even if it ended up being shelved soon after.

Choking traffic means the market has failed. Car owners do not sufficiently bear the costs they impose on other commuters, such as the space taken up, pollutants emitted, and road hazards posed by their cars.

Market failures such as this usually justify government stepping in. Yet the Duterte government seems to have given up on traffic management entirely.

Duterte has dropped his request for “emergency powers,” though it’s doubtful how that could’ve aided him at all. Government could also not produce a master plan on traffic management when asked by senators in a recent hearing. MMDA’s traffic management budget for 2020 was also reduced by 69% from last year.

In 2022, we need a new leader with enough brains and guts to solve the traffic menace once and for all. – Rappler.com